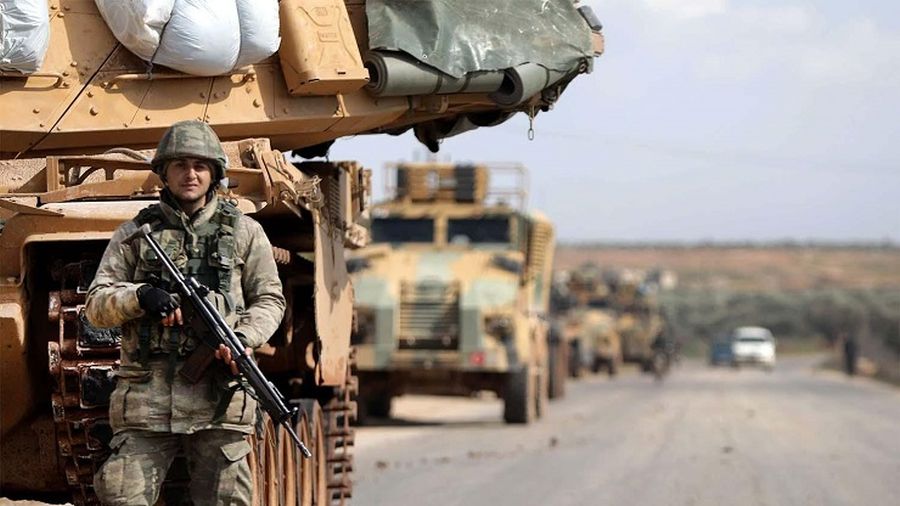 The situation in Syria in the coming days could seriously heat up due to several factors.

In the north of the country, this is due to Turkey’s active redeployment of hundreds of soldiers and military equipment to the border in recent days, in particular tanks, artillery, multiple rocket launchers, and air defense systems. This military buildup is similar to Ankara’s Operation Spring Shield in winter 2020. To legally support Erdoğan’s new military plans, Turkey’s Parliament on October 26 extended the authorization to use the army in Iraq and Syria until October 2023. On October 29, Turkish artillery shelled Ain Digna and Bailunia villages in northern Syria, controlled by Kurdish-led Syrian Democratic Forces (SDF). Under these conditions, anti-Turkish sentiments are growing in Syria, with demonstrations taking place in many cities .

The economic situation in Turkey is now more exacerbated than it was in the epoch when Operation Euphrates Shield, Operation Olive Branch, and Operation Peace Source were carried out, and this raises many questions about the inevitable substantial financial costs of a new military invasion. The current AK Party’s (Justice and Development Party) government, facing an economic crisis on the one hand and their opposition’s rising ratings on the other, is looking for a way out. Erdoğan’s government is nevertheless preparing a 4th military operation in northern Syria.

But to carry out this operation, Turkey must be able to use airspace and send ground troops into the region under the protection of the Turkish Air Force. So far, there are no hints that Russia will allow access to the airspace it controls in the Tell Rifaat area to Turkish aircraft. Moreover, the developments around Tell Rifaat also show that there are serious disagreements on this issue.

Ankara’s planned new offensive along the significant portion of the border is explained by Turkey’s desire to ‘neutralize the threat from the Kurds’ settled in northern Syria. Turkey captured several areas there in 2016-2019 and now controls the border from Bandar Khan to Ras al-Ein, and from Jarabulus to the Mediterranean coast. However, much of the territory between Jarabulus and Bandar Khan continues to be held by the Kurdish YPG unit for many years.

One of the main targets of the upcoming Turkish operation is the border town of Kobanî, 415 kilometers northeast of the Syrian capital, which the Kurds have been defending since 2012, first against DAESH, banned in Russia, and later against the Turkish army. Turkey expects to tie up two regions under its control after capturing Kobanî and gain an even stronger foothold in northern Syria as a result. Another undoubted goal of Turkey’s planned operation is to strengthen the pro-Turkish proxies in Idlib against a possible strike by the Syrian Arab Army (SAA) trying to liberate the province from the Turkish military extremist groups under Turkish control, numerous gangs fighting against everyone.

By launching a new round of armed intervention in Syria, Erdoğan expects to boost his ratings, which have been falling in the country in recent months, at the expense of a ‘small victorious war’. However, it cannot be ruled out that Turkey’s active escalation of military tension in northern Syria against the Syrian Kurds may be a favorite tactic of Turkish President Erdoğan to get the political preference he has desperately needed recently from Russia and the USA. All the more reason because Turkey had already deployed heavy troops to the Syrian border in September, a week before Erdoğan’s meeting with Vladimir Putin.

The transition of a new military intervention prepared by Ankara into an active stage has been contained due to active consultations between Russia and Turkey. And also, due to Erdoğan’s expectation of clear concessions from the US during his contacts with the US President at the 2021 G20 Rome Summit and the United Nations Climate Change Conference in Glasgow, given Washington’s support for the Syrian Kurds, whom the US considers allies.

In particular, during the press conference on October 31 at the outcome of the G20 Rome Summit, President Erdoğan expressed regret over the support of the United States of “terrorist organizations operating in Syria,” as such actions of Washington damage the solidarity of the two countries, the Turkish leader pointed out. The terrorists operating in the neighboring Arab republic were implied as fighters of the People’s Self-Defense Units (YPG), which Turkey considers the Syrian branch of the Kurdistan Workers’ Party (PKK), banned in Turkey. “I am sure there will be no more such support from the USA in the future,” Erdoğan said.

However, the meeting between President Erdoğan and US President Joe Biden, which took place on October 31 on the margins of the G20 Rome Summit and became the second meeting between the two leaders, did not bring much clarity to the further developments in Syria and Turkey’s actions. The Turkish government agency Anadolu singled out the agreement of the parties to create a joint mechanism for even more significant strengthening and development of bilateral relations. It means that the old communication format has been destroyed, and a new one will have to be created almost from scratch. So, it seems that the prelude to the failure of the USA and Turkish efforts to reach mutually acceptable compromise agreements was played in Rome. The existence of a systemic crisis in the relationship between the two countries is caused by deep contradictions in geopolitical and geoeconomic issues. The USA does not know what to do with the factors that contain Turkish interests. Syrian Kurds are becoming one of those factors. Moreover, Turkey sees the USA supporting those states in the region that have no desire to make Turkey stronger and let it become a dominant regional power.

Under the circumstances, we should expect that Turkey would face many troubles, which will be related to the events of its economy and public life and the uncertainty of the prospects of its policy in Syria.

Apart from the “Turkish factor,” the US policy in Syria continues to have a significant negative impact on the situation in the country. Above all, this results from Washington’s apparent support for Israel’s aggressive actions who persists in carrying out airstrikes, killing Syrians, on Syrian and Iranian infrastructure. For instance, on October 30, four F-16 tactical fighters of Israeli Air Force took off from their territory near Golan Heights. Avoiding Syrian airspace they made another strike with eight guided Delilah missiles on the Syrian Arab Air Defense Force facilities, 20 kilometers to the west and 12 kilometers to the northwest from Damascus. Despite the deployment of a BUK M2E surface-to-air missile system by the Syrian Arab Air Defense Force on duty and the destruction of two Israeli missiles, the strike caused minor damage to infrastructure and injured two Syrian soldiers.

Such Israeli activities, including countering pro-Iranian militias inside Syria, increase the risks to Americans and the continued US presence in Syria faces a growing number of challenges. Back in September 2018, Doug Bandow, in an article for The National Interest, sharply criticized the presence of American troops in Syria, stressing that United States operations here are illegal under both American and international law. On October 19, The National Interest again suggested that the USA had already lost in Syria and that by remaining there, it risked coming into conflict with Turkey, one of its closest allies. The constant deterioration of relations with Turkey, which is taking place, among other things, because of the USA presence in Syria, is clearly not good for the United States. And a direct clash between the Turkish military and pro-American forces in Syria (possibly even involving the US military directly) could lead to a severe breakdown in this policy.

Attention should also be drawn to the ever-increasing anti-American sentiment among Syrians demanding the withdrawal of the US army from their country. The growth of these sentiments is not only conditioned by the continuation of the illegal export of Syrian oil to Iraq by the USA, as the Syrian Arab News Agency SANA once again reported on October 25. A US convoy consisting of 33 vehicles, including oil tankers, under the guard of Kurds from the Syrian Democratic Forces, headed from the Al-Jazeera region to Iraq through the Al-Walid illegal border crossing.

Many Arab tribal and clan leaders in eastern Syria have recently joined the anti-American protests, with members killed because of their political views and beliefs against the illegal occupation of their country by US troops and their Kurdish allies. Earlier, the Kurdish security forces of Asayish and the US intelligence services had jointly carried out raids in Deir ez-Zor Governorate. More than 100 residents and representatives of Arab tribal unions were detained then on suspicion of organizing rallies in support of the government of Bashar al-Assad.

Under the aforementioned circumstances, peace in Syria is increasingly fragile, and any minute now could see the outbreak of yet another armed conflict in that country. 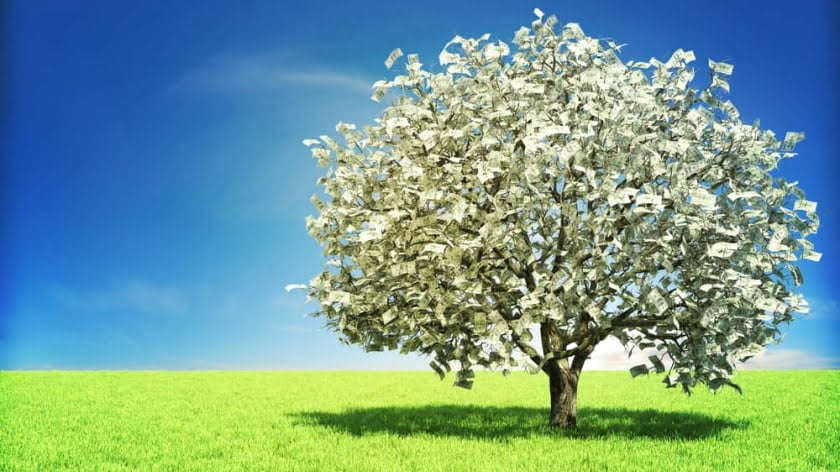 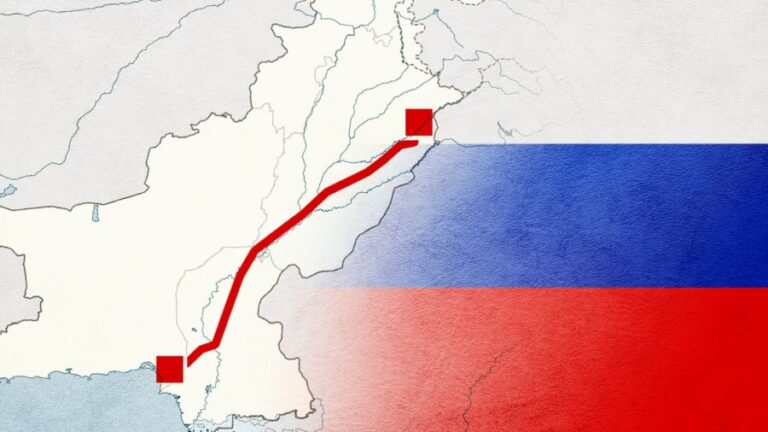 On January 17, Pakistani Prime Minister Imran Khan wrote on his Twitter account that he had a telephone conversation with Russian President Vladimir Putin and expressed thanks to him for his “resolute statement that freedom of speech cannot be a pretext for insulting our Prophet.” [i] The Prime Minister noted that “President Putin is the first… 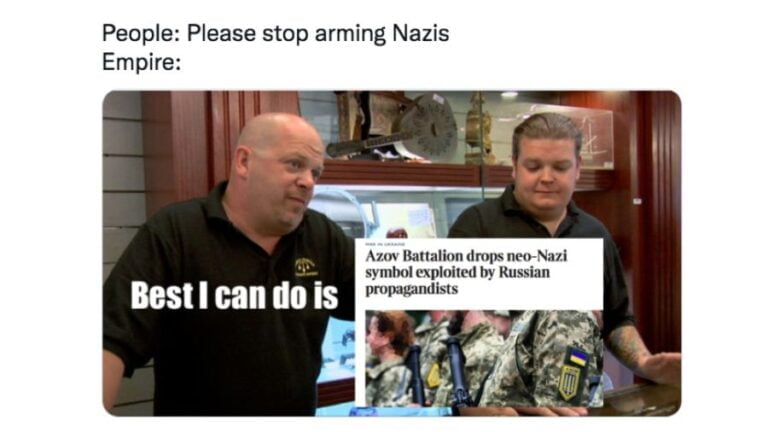 Listen to a reading of this article: ❖ Ahh, that’s much better. Problem solved. British empire smut rag The Times has a new article out titled “Azov Battalion drops neo-Nazi symbol exploited by Russian propagandists,” which has got to be the most hilarious headline of 2022 so far (and I’m including The Onion and other… 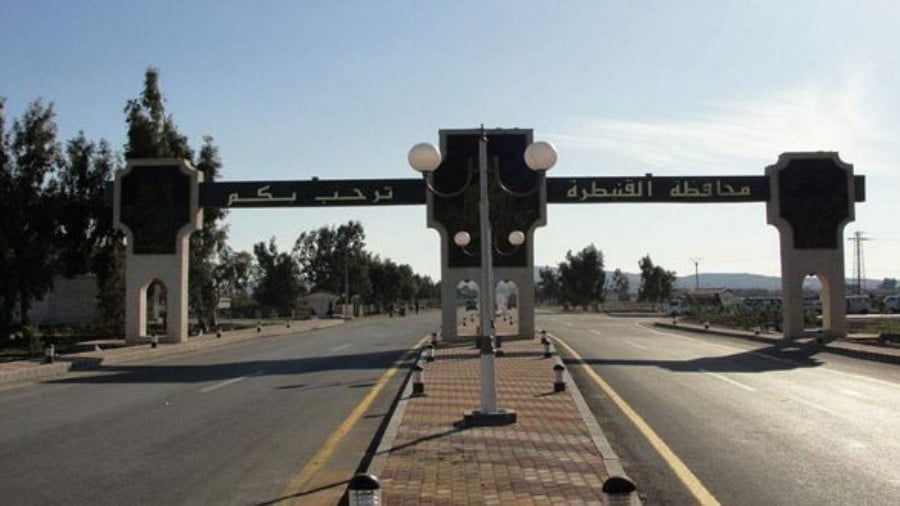 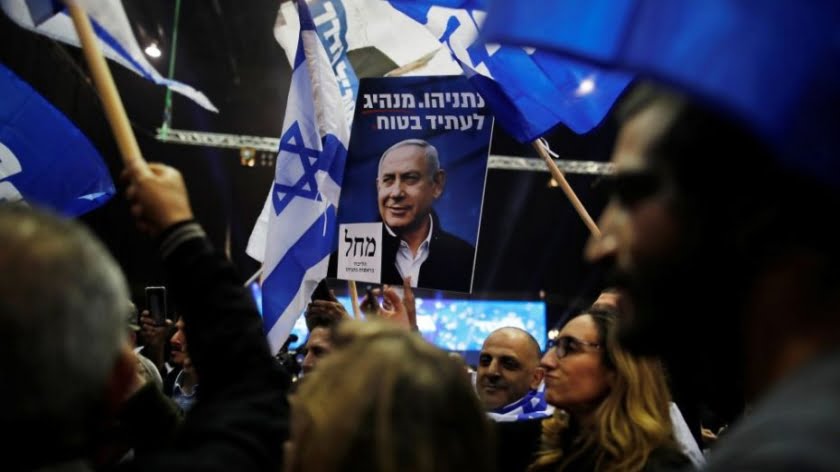