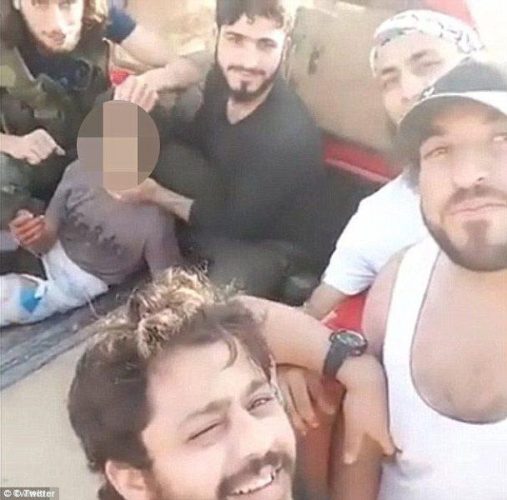 By Alice Donovan for Veterans Today

The U.S.-led coalition keeps on horrifying the international community with its actions in Syria. A video circulating on social media on Tuesday depicts rebel fighters beheading a boy identified as “Abdullah Issa” after capturing him north of Syria’s second city Aleppo.

The men, part of a militia which has received support from Arab and western nations, appear to taunt the bound and terrified child, who they claim is a fighter from Liwa al-Quds (the Jerusalem Brigade), a Palestinian pro-government militia operating in the Aleppo area.
Sickening footage shot immediately before the boy is slaughtered shows him in ragged clothes surrounded by bearded militants in the back of a pick-up truck.
In the uncensored version fighters from the Islamist group – which is loosely linked to the Free Syrian Army (FSA) – are seen laughing in the back of a pick-up with the boy, who they handle roughly and appears terrified. The video then shows one of the men behead the child with a small knife. The killer places the boy’s head on his back as the men then chant “Allahu Akbar”.
Various rebel groups in Syria backed by the U.S. and its allies, specifically among them the Nour al-Din al-Zinki Movement, Amnesty International said, “have committed serious violations of international humanitarian law, including abductions, torture, and summary killings.”
And these bastards are officially supported by the U.S.-led western coalition!
Moreover, at least 20 civilians were killed on Monday in air strikes by U.S.-led coalition planes on the Islamic State-held city of Manbij in northern Syria, near the border with Turkey. The raids hit the northern Hazawneh quarter of the besieged city where U.S.-backed Syria Democratic Forces (SDF), an alliance of Kurdish and Arab fighters, are engaged in street fighting with the militants. 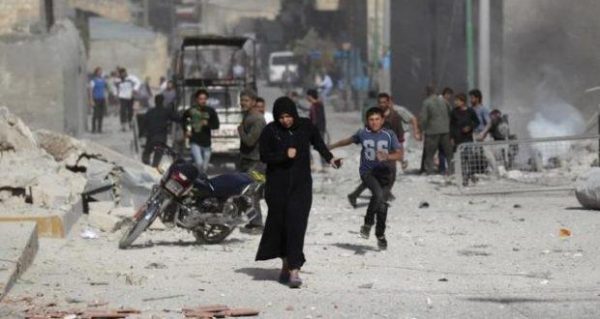 But it’s not over yet. At least 56 civilians were killed on Tuesday in air strikes north of the besieged Islamic State-held city of Manbij in northern Syria, and residents said they believed the attack was carried out by U.S.-led warplanes, a monitoring group said.
The Britain-based Syrian Observatory for Human Rights (a recognized MI6/ISIS front) said the dead included 11 children, and that dozens more people were wounded.
Col. Chris Garver, a spokesman for the United States-led coalition fighting the Islamic State in Syria and Iraq, said it was looking into reports of civilian deaths. He said the military was being “extraordinarily careful to make sure” that airstrikes were selectively hitting fighters for the militant group. 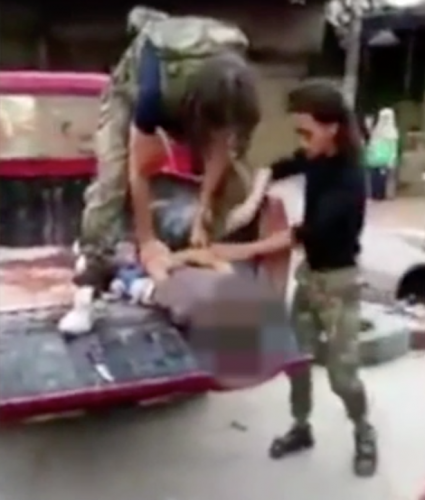 I wonder, is Col. Chris Garver so blind or stupid if he really believes his words? Dozens of civilians including children die every day in Syria because of their so called extraordinarily careful airstrikes! Anyone responsible for violations of international humanitarian law must be brought to justice and victims and their families should receive full reparation!

These two cases show us the failure of the United States to promote peace in either the world or our country. The only thing our government should understand is their internal and foreign policy does not fight for people’s rights and democracy but creates more terrorists and police killers.

After Baghdadi: Will Islamic State Fighters Seek Return to al-Qaeda?

Baghdadi May Be Dead. But Trump has Brought ISIS Back to Life

Baghdadi, the Invisible Leader of a Fake Army

Where is the Proof? We’ve Been Here Before, Al Baghdadi’s been Reported Dead or Fatally Injured Many Times
Middle East
ISISSyriaUS