Core Edicts of the Khazarian Mafia Top Command (Part I)

August 4, 2016
The Core Edict of the Khazarian Mafia is to transform “We The People” into powerless, self-defeating, self-hating Goyim.
“We are all born ignorant, but one must work hard to remain stupid.” — Ben Franklin
_________
The last several years Veterans Today directors have disclosed for the very first time publicly, the presence and power of the Khazarian Mafia (KM).
As many VT readers know, the KM is the world’s largest organized crime syndicate, an incredibly evil entity associated with and empowered by the City of London private central banking system.
This is a subject no other major online journal has ever dared to even reference, yet alone describe its reach in contemporary political, security, economic, and social affairs.
And now after VT’s continuing disclosures on the KM, other alternative media websites are publishing articles where the authors are openly discussing the KM’s fingerprints, with some even using the name, Khazarian Mafia.
Several years ago, the Top Directors of VT decided to shift to open source Intel, both in “at the scene” collection, as well as with dissemination.
This shift in VT to open source Intel was not only unprecedented and revolutionary in concept, but has sent shock-waves through the Khazarian Mafia (KM) top leadership circles. And we now know that the KM top Chieftains do not have adequate power to stop it without “like kind” swift retaliation, which so far has been a strong deterrent.
This exposure of the KM publicly and open-source Intel would never have been possible with the advent of what is best described as Intel Cowboys and their re-patriatization. Intel Cowboys are a whole new genre of Intelligence agents, operatives and assets, folks who are committed to truth and sick and tired of the evil handiwork of the Khazarian Mafia (KM). And yes, some Intel cowboys are women.
And as dissatisfaction has developed within almost every Intel Agency in the world, especially those who are under the direct control of the KM, more and more Intel officers, agents and assets all over the world are secretly rebelling and following the lead of these Intel Cowboys.

Yes, there are even disgruntled Intel inside the Mossad and the IDF and many other agencies one would normally think of as KM-owned and -controlled “true believers”. To do this in America, their main base of KM military and industrial operations, the KM Top Chieftains needed to gain control over all American institutions, governmental, corporate and private/social.
This was their first objective and was obtained by infiltrating and hijacking the American monetary manufacturing and distribution process in 1913, with the KM-bribed and bought passage of the Federal Reserve Act.
The next step is of course to compromise the US Congress by highly sophisticated covert means and manipulate it to pass laws that are unconstitutional and against the best interests of “We The People”.
But to get this illegal and evil legislation signed as law, the KM has had to make sure that US Presidents who are elected serve them and continue to cover up their many years of crimes against We The People that began en masse in 1913.

The next step in the KM take-down plan for America is to build up a big totalitarian internal police force, which can be turned upon the American Masses to oppress and tyrannize them, when necessary.

To do this the USG consolidated all American Law Enforcement and Alphabets into one central command structure, Homeland Security (DHS), set up and run by sexually perverted Israeli-American “Israeli-first” Dual Citizen traitors who are deeply committed to two things: the first is to militarize all American LE into a Stasi-style secret police army; and the second is to transform America into the world’s largest open-air prison camp, GAZA II with We the People to become the New Palestinians.
The KM attack on America on 9-11-01 was intended to create the threat of “World Terror” as a new cause to rally around in order to fight numerous new wars.
It was used as a phony excuse to borrow from the 7 trillion USD from the private Rothschild Federal Reserve System at full interest to fight all these illegal, unconstitutional, undeclared, unprovoked, unwinnable wars of aggression for Israel and the KM to supposedly stop terror.
Of course if the USG were really serious about stopping World Terror, the solution is quite straightforward. What would have to be done is to arrest, try, convict and hang (for treason, sedition, war crimes, torture, crimes against humanity and mass-murder) all those responsible for 9-11-01 and these wars fought because of this covert operation.
Arrestees would include Bush2, Cheney, Rumsfeld, Meyers and the Top PNACers and Neocons, including many top directors of JINSA and AIPAC and Netanyahu too, folks that planned, executed and covered up 9-11-01 and started and ran all these illegal, unconstitutional Mideast wars of aggression for the KM and Israel.
But 9-11-01 has also served as an excuse to create the phony “War on Terror” in order to militarize the American Police and make them quick to shoot and empty their clips over any lack of compliance even if minor, instituted as  a means to create continuing strife and division in the American Masses.

Of course when the CIA sells drugs and guns to inner city gangs and dirties these inner cities up, it creates a powder keg of crime and conflict and continuing conflicts with the police which is now militarized and trained by ADL, IDF and other so-called experts in domestic terror (all extremists and terrorists in their own right).

The creation of situations in American urban society that cause serious life threatening and continuing conflict and divisions is one of the main motivations of the Top Chieftains of the KM. And this is exactly what they have done and we are experiencing in many urban areas of America right now.
The reason members of the US Congress will not address Israel’s genocide of Palestinians and grand theft of their lands is because they sense this is a taboo subject and to pursue it would get them un-elected or assassinated in short order by the KM and their puppets with power and money.
Doubt this, just talk to Cynthia McKinney, or consider the hit Dick Cheney ordered on sitting Senator Paul Wellstone for refusing to support another phony Israeli war of aggression in Iraq.
But building up a big internal police state private army and establishing a Globalist NWO run by them only is actually not the main goal of the top Khazarian Mafia Chieftains, the Select Few that sit at the top of the pyramidal Establishment Hierarchy that controls the Western world.
_________
Conclusion
The KM is an entity some deep insiders have referred to asthe Secret New Roman Empire run by the thirteen “Bloodline families” often described as the “Old Black Nobility” allegedly linked to Canaanite bloodlines, groups based on extreme secret and evil practices of ancient Babylonian Talmudism.
The inner circle of these groups are known to practice Luciferian/Satanic Black magic, child sacrifices to Baal and have admitted to individuals at the periphery that they worship Lucifer and make a contract with him for their eternal soul and in exchange receive untold riches, power status and their own non-corporeal spirit guide which helps them manage their affairs.
The more Black-magick rituals they practice, the more power they claim to obtain from the dark side. By their own admission, this KM inner circle believes that Lucifer/Satan is rising to become the ruling God of the universe and has already taken over planet Earth.
These particular notably evil and criminally insane beliefs and practices are shielded by a phony and usually positive outward appearance, thus making them two-faced.
These twisted evil beliefs create a willingness to secretly murder, poison, buy off and corrupt politicians, officials and judges and do anything they can get away with to make progress toward the attainment of their evil Globalist NWO one-world system.
And the KM Top Chieftains believe they have been promised to be the ones running this NWO system if they succeed in their goal of exterminating 90% of the world’s populace by a variety of incredibly sophisticated, evil means.
Part II will disclose more of the Core Edicts of the Khazarian Mafia Top Command.
Source: veteranstoday.com
(Visited 69 times, 1 visits today) 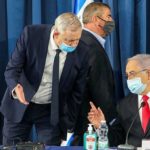 Israel: Yet another Election with No Obvious Choice
Miscellaneous
AshkenaziBanksBlack MagicIsraelJewsKhazarNWOSatanic