New Zealand authorities have issued a tsunami warning, urging people along the entire east coast to move inland or to high ground, after a powerful earthquake hit northeast of Christchurch, the biggest city on South Island.

The tremor, with a magnitude initially estimated at 7.4 before being scaled up to 7.8, had a shallow depth of 23km, according to the US Geological Survey.

Family friends in Cheviot say some houses are gone #eqnz

Still going. 5.8 seddon, 3.4 turangi, 4.1 taupo. Apparently there are reports of damage in Wellington

NZ Ministry of Civil Defense and Emergency Management (MCDEM) issued a tsunami warning for the eastern coasts of North and South Islands.

Shortly after that, Burwood Ward Councilor Glenn Livingstone wrote on Twitter that a “2m high tsunami” hit the town of Kaikoura and moved away from the coast.

MCDEM warns the first wave may not be the largest, as tsunami activity is expected to continue for several hours.

This is a local source event – we don't have info about specific locations. The tsunami threat is for the East Coast of all NZ #eqnz

A tsunami has been generated, the first wave has arrived in the North Eastern Coast of the South Island. #eqnz

A surge of up to one meter was recorded in North Canterbury region of the South Island, Anna Kaiser, a seismologist at GNS Science told Radio New Zealand.

“That’s reasonably significant so people should take this seriously,” she added.

At least ten aftershocks with magnitudes from 4.9 to 6.2 have struck South Island of New Zealand, USGS reported.

The tremor has been officially rated “severe,” the New Zealand Herald reported, adding that sirens could be heard in the capital of Wellington.

There are reports that houses in the town of Cheviot have been badly damaged.

“I hope everyone is safe after the earthquake tonight. [New Zealand] Civil Defense is looking into the impact of the quake,” John Key, NZ Prime Minister wrote on Twitter.

In Wellington, 214km from the quake’s epicenter, some windows and chimneys were smashed and the power was knocked out in several places, AP reported.

According to Wayne Timmo, a resident of the town of Hamilton, the quake felt like a “long slow, rolling or almost rotating motion.”

“The water in the neighbor’s swimming pool was left sloshing around for about a minute and people woken by the quake came out onto the street to talk about it,” he told Stuff.co.nz news website.

“It really shook for a long time,” Jo Davis from the town of Nelson also told the news outlet.

The quake damaged power lines in several neighborhoods and power may not be restored until morning.

Back in 2011, Christchurch was struck by a 6.3-magnitude earthquake that killed at least 185 people and injured hundreds.

Hotel guests in bathrobes outside as they wait for all clear – bargoers still drinking however #eqnz #wgtn pic.twitter.com/T9vvfMZb3T

That was enormous in Wellington. Must have been horrific in Christchurch #eqnz

MASSIVE EARTHQUAKE just hit – biggest I've ever felt and it's from the South Island. PRAYING people are okay this time.

Wow. That was quite a shake. Looks like a biggie down south. 7.5 44km deep by first reports near Cheviot. #quake #NZ #eqnz

Man down! Parliament's art collection has taken a hit from tonight's quakes pic.twitter.com/v8gCc54CJP 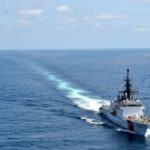 COVID-2019 and Its Effect on the Indo-Pacific Region

Clash of Civilizations 2.0 Sponsored by Prince and Bannon

Hindutva and Fascist White Nationalism: A Match Made in Hell

Who Spawned the Christchurch Killer?