Known in Hebrew as Yerushalayim and in Arabic as al-Quds, Jerusalem has the greatest number of sacred sites of any city on earth and is considered by many to be the center of the world.

It is one of the oldest cities in the world and it is of great significance for Christians, Jews and Muslims alike.

Throughout the course of history, Jerusalem has been conquered, destroyed, and rebuilt more than a dozen times. This extremely important location for Christians, Jews, and Muslims has attracted millions of pilgrims over thousands of years and as written by the 19th-century French writer François-René Chateaubriand: “There never was a pilgrim who did not come back to his village with one less prejudice and one more idea.”

However, in some cases, the sights in Jerusalem can overwhelm believers and it can evoke a rare condition known as Jerusalem syndrome. It is a delusive condition affecting some visitors to Jerusalem in which the subject identifies with a major figure from his or her religious background.

Dr. Pesach Lichtenberg, the head of the psychiatric ward at the Herzog Hospital in Jerusalem told the National Public Radio that “Jerusalem syndrome is a phenomenon aware of people, pilgrims, tourists who come to Jerusalem are so overwhelmed by the sense of holiness here that something happens to them. And certain fantasies, redemption fantasies of making the world a better place overcome them, and they believe they have a messianic mission which they must fulfill, which can cause problems. And this can happen sometimes to people who showed no sign of any sort of mental illness before this. And more often it will happen to people who have already been diagnosed and have had problems with their adjustment before coming to Jerusalem.”

Dr. Yair Bar El, formerly director of the Kfar Shaul Psychiatric Hospital, was the first to identify the Jerusalem Syndrome. Symptoms usually start to show one day after the visitor arrives in Jerusalem. For many of the sufferers (mostly British and American visitors), it begins with anxiety and isolation followed by an obsession with purification rituals.

Many sufferers begin wearing hotel bedding as an imitation of biblical garb and start prophesizing. They often start screaming, shouting, or singing out loud psalms, verses from the Bible, or religious songs. In some cases, tourists’ delusions are so strong that the Jerusalem police are forced to intervene.

Dr. Bar El told the BBC that he had treated several Jesus Christs, a Virgin Mary or two, and a Samson.

“Jerusalem is like a magnet that attracts people, some of them mentally ill, some of them with deep religious convictions; strange, rare persons,” he said.

“They come here with an ideal and unconscious image of the holy places in Jerusalem, and when they see the real holy places they can’t cope. They develop this psychotic reaction to build a bridge between these different images of Jerusalem”, he added.

According to the British Journal of Psychiatry, there are three types of people affected by Jerusalem syndrome:

Although Jerusalem Syndrome was first clinically identified just a few decades ago, evidence shows that it dates back to Medieval times.

The Battle for Jerusalem: Turkey’s Erdogan Stakes His Claim 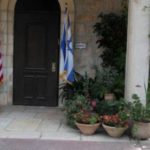 Pompeo in Jerusalem: And the Walls Came Tumblin’ Down

King David’s Ancient Road: How Israeli Archaeologists Are Aiding the Theft of Silwan

Jerusalem's Old City: How Palestine's Past Is Being Slowly Erased
Religion
Jerusalem