Syria’s Cauldron: One Step Away from Major Showdown

Syrian rebels from Eastern Lions and Ahmad al-Abdo Army formations – the elements of the Free Syrian Army (FSA) – state that they are «intensely» attacking Iranian-backed pro-government militias in the eastern Syrian desert in an operation dubbed «The Land is Ours». The forces’ strength is around four thousand. The main enemies are the Islamic State (IS), Syrian Arab Army (SAA) and Syrian government-allied forces. The operation is conducted near Syria’s borders with Iraq and Jordan. This time, the mission is to squeeze the SAA and its allies out from the desert areas.

Supplied from Jordan, the opposition plans to ultimately advance further into Syria’s territory. Combat operations areas encompass the de-escalation zones proposed by Russia, Turkey and Iran where ceasefire was expected to be established on June 6. In peace talks in early May, Russia, Iran and Turkey signed an agreement to create four de-confliction zones in Syria. This deal was supposed to apply to the US as well, but the Trump administration has refused to recognize the legitimacy of these de-escalation zones—even while using them to justify attacks on Syrian government-allied forces.

Evidently, one of the goals pursued by the escalation of hostilities is to demonstrate that the armed opposition is a force to reckon with at a time the crisis management talks are held in Astana and Geneva. Obviously, this is an attempt to subvert the ongoing international peace efforts.

At first glance, the mission appears to be a dubious venture as the opposition forces advance into desert with no urban areas. However, the goal is not to seize populated areas but rather to undermine the Russia-backed initiative aimed at establishing de-escalation zones. The opposition has decided that the time is right for changing the tide of war into its favor. The forces can advance more rapidly in desert as the SAA presence there is not as strong as in other areas.

Another goal is to cut off the Syrian Army and the Shia Hezbollah movement supply routes from Iran. It’s the south and the south-west of Syria where the decisive battles are fought today. On May 18, the US sent aircraft to strike Syrian regular army (the Syrian Arab Army-SAA) vehicles near al-Tanf, an army base where special forces are training Syrian militias. No doubt, the airstrike and “the Land is Ours” offensive are not isolated events.

It should be noted that the United States has bombed Syrian government-allied forces three times in just eight months. Does the U.S. have the right to tell Syria where its forces can go in its own country and strike them at will? Can it be done without benefitting IS terrorists? Still, that’s what the American military does while US officials condemn other actors involved in Syria’s conflict.

Meanwhile, US Special Forces have set up a forward base at Al-Zukf in the Syrian Desert, 70km northwest of the Syrian-Iraqi-Jordanian border triangle and the Al Tanf crossing, which is controlled by US, Western allied and Jordanian special forces, together with the Revolutionary Commando – a US-trained Syrian rebel unit. The mission is to keep the SAA and Hezbollah units away from the Al-Tanf crossing and prepare a springboard to attack Abu Kamal, located at a distance of 200km northwest of Al-Tanf. The overriding goal is to prevent Syrian and pro-Syrian forces from gaining control of the Syrian-Iraqi border, leaving Syria with no direct land route to connect it with Iran through Iraq.

The opposition takes other actions to thwart the peace efforts. Maghawir Al-Thawra Army, an international-coalition-backed division of the Free Syrian Army, announced the establishment of a military base for training and maneuvering in al-Zakf area of the Syrian desert. Formally the declared goal is to prepare for liberation of Abu Kamal from Islamic State (IS). Instructors from the US-led coalition are present at the base for training and supervision.

On June 6, the US-backed rebel alliance declared the start of the battle to liberate the Syrian city of Raqqa, the extremist group Islamic State’s (IS) stronghold and self-declared capital in the country. The SDF, a coalition of Syrian Kurds and Arabs, is engaged in heavy fighting with militants on the eastern and northern outskirts of Raqqa. The IS forces are reported to be fully encircled but in reality the fighters flee the besieged city to join the fighting in Palmyra and Deir Ez-Zor. The Russian Aerospace Forces (not the US-led coalition aircraft) deliver strikes to prevent them from moving southwards.

The IS terrorists in Deir Ez-Zor received large reinforcements and now they are attacking government troops in the area. They have managed to intensify the offensive against the Syrian government-held Deir Ez-Zor because the US-led Syrian Democratic Forces let them escape from Raqqa and move to other places. The same way the US-led coalition allows IS fighters to leave Mosul in Iraq and move to Deir ez-Zor. And everywhere they go, it’s Russian, not US aviation that prevents extremists from moving freely around the country.

If Deir ez-Zor is captured, the IS will free significant forces to reinforce its positions in other places. The city will become the new capital of the self-proclaimed caliphate. The Syrian land forces moving to reinforce the Deir-ez-Zor defenders from Palmyra still have about 180-200 km to go overcoming stiff resistance from the IS forces. It will take time. They pin their hopes on Russia’s aviation and the reinforcements coming by air, including those transported by Russian Il-76 cargo aircraft transferred to the Syrian Air Force.

US officials have spoken so often about the need to do away with the Islamic State but they have failed to convert the words into deeds. Freeing Raqqa and Mosul while providing the opportunity for the IS to capture Deir-ez-Zor and seize new territory is like robbing Peter to pay Paul.

While the world’s attention is focused on the Arab rift with Qatar isolated by a number of Saudi-led states, the situation in Syria is nearing conflict to nullify the achievements of the Astana and Geneva peace efforts. The ingathering of major forces in this part of Syria is ominous. It augurs the approach of a major showdown for control of southeastern Syria and its strategic multiple border assets. The situation calls for urgent contacts between US and Russian officials to dissipate tensions and make arrangements to prevent the worst. 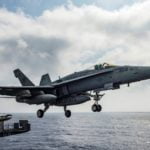 Washington to Blame for Building Tensions in Syria

Give Peace a Chance: Saudi Arabia and the UAE Jostle for Position in War-Ravaged Countries for Contracts