One has to wonder why terrorists like those who struck on Saturday night in London, and earlier in Manchester, launched their attacks now. It is difficult not to infer that their violence was timed to influence the UK election this coming Thursday.

Those behind the attack – whether those carrying it out or those dispatching the terrorists – want to have an effect. Terrorism is the use of indiscriminate violence for political ends. It has a logic, even if it is one we mostly do not care to understand.

So what do these terrorists hope to achieve?

Based on prior experience, they will assume that by striking now they can increase fear and anger among the British population – intensifying anti-Muslim rhetoric, justifying harsher “security” responses from the British state and shifting political support towards the right. That is good for their cause because it radicalises other disillusioned Muslim youth. In short, it brings recruits.

Islam is not exceptional in this regard. This is not a problem specifically of religion. As experts have repeatedly pointed out, disillusioned, frustrated, angry (and mainly male) youth adopt existing ideologies relevant to them and then search for the parts that can be twisted to justify their violence. The violent impulse exists and they seek an ideology to rationalise it.

Once Christianity – the religion of turning the other cheek – was used to justify pogroms and inquisitions. In the US, white supremacists – in the Ku Klux Klan, for example – used the Bible to justify spreading terror among the black population of the Deep South. White supremacists continue sporadically to use terror in the US, most notably Timothy McVeigh, who was responsible for the Oklahoma City bombing in 1995.

Terrorists can exploit secular ideologies too, on either the far-right or far-left. Just think of the Baader Meinhof Gang or the Symbionese Liberation Army, back in the 1970s. The latter famously made a convert of Patty Hearst, granddaughter of publishing empire magnate William Randolph Hearst (aka Citizen Kane). After she was taken hostage, she quickly adopted the group’s thinking and its violence as her own.

The Islamic terrorists of our time believe in a violent, zero-sum clash of civilisations. That should not be surprising, as their ideology mirrors the dominant ideology – neo-conservatism – of western foreign policy establishments. Both sides are locked in a terrifying dance of death. Both believe that two “civilisations” exist and are incompatible, that they are in a fight to the death, and that any measures are justified to achieve victory because the struggle is existential. We use drones and “humanitarian intervention” to destabilise their societies; they use cars, guns, knives and bombs to destabilise ours.

The dance chiefly takes place because both sides continue it – and it will not be easy to break free of it. Our meddling in the Middle East dates back more than a century – especially since the region became a giant oil spigot for us. The tentacles of western interference did not begin in 2003, whatever we might choose to believe. Conversely, a globalised world inevitably entails one where a century-long colonial battlefield can easily come back to haunt us on our doorsteps.

The solution, complex as it will need to be, certainly cannot include the use by us of similarly indiscriminate violence, more “intervention” in the Middle East, or more scapegoating of Muslims. It will require taking a step back and considering how and why we too are addicted to this dance of death.

Provocation on the High Seas: U.S. Naval Adventures Near the Shores of Russia, China and Iran 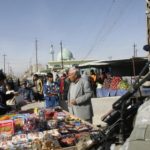 Tens of Millions of People Displaced by the 'War on Terror', the Greatest Scam Ever Invented

As Cold War Tensions Escalate, What Are Governments Trying to Hide?
Opinion
BritainWar on Terror