The war on terrorism is enduring. After the Barcelona massacre, the Russian Federal Security Service (FSB) detained two Islamic State (IS) group members who were planning to carry out attacks in Moscow’s crowded places on September 1 – the Knowledge Day. One of the suspects said he had come to Russia “to commit jihad” ordered by IS. Earlier this month, two suspected IS-linked terrorists were arrested. They were also preparing attacks in the Russia’s capital. This war never ends.

With Raqqa, Syria, to be liberated soon, the Islamic State (IS) will no longer control major populated areas or big chunks of land. But the organization will not vanish. Its leaders know well how to adapt to circumstances and stand up to those who have greater resources. The former Iraqi Baathist officers and officials in the IS ranks know how to fight and run state structures. The terrorist group has been fighting for three and a half years against superior forces, adroitly playing one adversary against another.

In the period 2003-2010 the IS (then ISIL or ISIS) was just another terrorist group operating in Iraq. It lacked human resources. What did it do? The group launched terror attacks against Shia Muslims in power to make them respond and crack down on Sunni Iraqis. This created a fertile ground for recruitment. Then the West-supported Arab Spring came to create great opportunities for IS expansion. Governments were losing ground, enabling the terrorists to make gains. The IS seized big chunks of land in Iraq, Syria and some strongholds in Libya to become a quasi-state.

The Iraqi Kurdistan Regional Government (KRG) announced its decision to hold a referendum on independence exactly at the time the Iraqi regular armed forces were weakened after the losses suffered in the battles of Ramadi, Fallujah and, recently, Mosul. The Mosul fighting was especially tough with the Iraqi Army’s Golden Division hit hard and armored vehicles lost in great numbers. The Iraqi Army is feeling the pinch. In a tight spot, the Iraqi government turned to Russia for help. The aid package, including military supplies, was discussed during the recent visit to Russia of Iraqi Vice President Nouri al-Maliki.

The IS is waging a war against everyone, including states and other terror groups. There is no way the group could economically develop the regions under its control. Any production facility built would become a target. Expansionism is the only way to survive. Seize new lands, exploit them, use the resources and fight again. The fighting should never stop. Ideology is the driving force. With lands captured in Syria and Iraq, the idea of creating a worldwide caliphate looked appealing to many. It really works.

The IS leadership realizes it cannot achieve a strategic victory. Today the group is being squeezed out from urban areas but it will continue to operate as an underground network. There will be no military force to counter but the security threat will remain globally. The terror group has vast human and financial resources accumulated. It will move to other regions and countries. There are a lot of places it can go, especially the vilayets (provinces) beyond Iraq and Syria, including vast territories in Egypt, Saudi Arabia, Libya, Algeria, Nigeria, Yemen, Afghanistan, the Russia’s Caucasus and South East Asia. They’ll try to establish control over criminal businesses.

Afghanistan with its narcotraffic, the oil-rich Libya, Yemen located near key sea routes and Indonesia with its 200,000 Muslim population – all of them are the regions of special attraction. The IS already has presence in many of these places and the fighting is already raging. When the group gains ground in one of the places mentioned above, a quasi-state will appear again. Instability to entail weakened government control would be seen as an opportunity to seize. The hydra will never be beheaded until its ideology is not defeated globally.

An international threat must be countered by an international effort. The diplomatic, economic and sanctions wars, the gradually emerging arms race and a host of other factors aggravating the relationship between world leading actors open new opportunities for the common enemy. The more differences exist between the leading world actors fighting the IS, the stronger the group gets.

There were great divisions, including ideological differences, between the USSR and the leading Western nations before WWII. They united against the common threat and won. There are no insurmountable problems in the relationship today. Nothing prevents the West, Russia, China and other pertinent actors from putting differences aside and address the common problem of mutual interest.

While the US is preparing plans of economic war against China and is engaged in escalating tit for tat diplomatic battle with Russia, the IS militants are preparing new deadly attacks. After all, Jihadists, not Russians, Chinese or Iranians, have killed 94 Americans on US soil since 9/11 through the end of 2016. With so many problems diverting attention, the perspective on what constitutes a real threat to global security should not be lost. The threat is part of global reality and will not go away but jihadists must not be allowed to write the rules feeding off of the conflicts dividing major poles of power.

The New Domestic War on Terror is Coming

Biden or Bush? Democrats and Neocons Clamor to Bring the 'War on Terror' Home 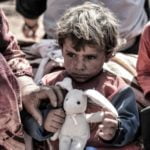