Shifting Geopolitical Realities in Afghanistan. Threat to US Hegemony?

Violent geopolitical rivalries between imperialist and hegemonist powers over Afghanistan’s natural resources, trade and transit routes, and geostrategic location have dramatically intensified. Despite sixteen years of heavy-handed US presence to establish its hegemony in Afghanistan and beyond, influence of regional powers like Russia, China, Iran, Pakistan, and India is growing.

Sixteen years into the longest war in its history, the US is aggressively flexing its muscles to assert and maintain its hegemony in Afghanistan and the region. This new development, however, does not stem from Donald Trump’s so-called Afghan strategy. The aggressive posture on the part of the US is partially a reaction to its humiliating defeat in Syria – and one should add Iraq – at the hands of Russia and Iran (with China in the background). Trump’s strategy generated some hysteria among the chattering class as being qualitatively distinct from its predecessors in that it commits the US to an open-ended war.

The fact of the matter is that ever since its official launch on October 7, 2001, the US war in Afghanistan has been an open-ended war. Its endgame depends on US’s hegemonist goals in the region. In other words, the US is pursuing a strategy of perpetual war in Afghanistan irrespective of which president holds office.

Under the Bilateral Security Agreement (BSA), the US maintains nine military bases at strategic locations across Afghanistan including those bordering Iran, Pakistan and Central Asian Republics. The Afghan airspace is controlled by the US for all practical and strategic purposes. The latter, thus, enjoys a unique geopolitical lead to project power beyond Afghanistan. The infrastructure allows the US to deploy up to 100,000 troops in two to four weeks.

In the grand geopolitical chessboard of Afghanistan, the US is left with the military option only which it pursues, at this stage, through a combination of terrorist proxies, drone attacks and Special Forces operations. It has locked itself in at a geopolitical space surrounded by hostile regional powers like Russia, China, Iran and Pakistan.

More recently, by elevating IS presence in Afghanistan and its level of threat to US enemies such as Russia, China, and Iran, the US is elevating the justification for its own military options intended to go beyond Afghan strategic geography. The US is essentially playing a destabilizing role in the region as it aims at establishing world-tyranny. Its strategy revolves around the so-called Wolfowitz Doctrine which aims at preventing the emergence of a regional or global power that could challenge US’s sole hegemonic status.

However, US’s attempt at establishing its hegemony in Afghanistan and beyond is being challenged by a de facto strategic alliance involving Russia, China, Iran and Pakistan. In other words, the US-NATO coalition is facing a formidable enemy – three of which are nuclear powers – determined to contain US’s hegemonist ambitions in the region. China and Russia are at the forefront of shaping this new geopolitical reality.

China’s ambitious One Belt, One Road (OBOR) initiative that aims to connect Asia, Africa and Europe surpasses trade and economic interests and shifts the geopolitical dynamics on a global scale. Its immediate implications are already felt in South and Central Asia – where its ultimate success depends – with Afghanistan as the geopolitical heartland.

As part of OBOR, the over $50-billion China-Pakistan Economic Corridor (CPEC) subproject became operational on November 13, 2016 when the first batch of Chinese cargo was transported to Gwadar port in insurgency-ridden southern Baluchistan province for onward maritime shipment to markets in Africa and West Asia. China has built a naval base in Gwadar overseeing the Arabian Sea and Indian Ocean with a second one reportedly in the making exclusively for military purposes. Gwadar runs deep in China’s strategic nerves both in peacetime but especially in wartime which could see blockade of Chinese naval access to the Pacific. Given Pakistan’s overdependence on China, CPEC is believed to cement China’s clout to influence political and military decisions in that country.

China has further consolidated its strategic footprint in the Indian Ocean by taking over the strategic Hambantota port in Sri Lanka on a 99-year lease contract with 70% stake in exchange for reducing $1.1 billion of the country’s overall 8$ billion debt to China. China’s $38 billion worth of investments in Bangladesh may likely result in breaking up the geopolitical stalemate over the construction of a deep seaport in Sonadia island following pressures exerted by the US, India and Japan on Bangladesh forcing it to abandon the project. China was outmaneuvered over Sonadia by Japan’s counterproposal to construct the Matarbari deep seaport 25km from Sonadia. That may now be changing as Sino-Bangladeshi relationship has been elevated to the strategic level.

All this is happening to the dismay of the US and India – and Japan – who see China’s growing influence as a direct threat to their hegemony over shipping corridors in the Indian Ocean. In anti-Chinese jargon, increasing Chinese presence in and around the Indian Ocean is called The String of Pearls which the trio sees as a Chinese containment strategy. China maintains that its naval presence is to protect its sea lines of communication (SLOCs) – critical among them the South China Sea – that connect Chinese mainland to foreign sources of energy in the Middle East and Africa and build a “harmonious ocean”. China, in other words, is all about harmonious hegemony.

It is in Afghanistan that the tectonic geopolitical shift is played out in all its ugly forms and manifestations. China seems to be the main winner in post-US occupation Afghanistan having secured lucrative deals to exploit natural resources.

After allegedly paying a $30 million bribe to the Afghan Minister of Mines, the state-run China Metallurgical Group Corporation (CMGC) secured the contract for Mes Aynak copper mine in Logar province, one of the largest copper reserves in the world and a 5000-year-old archaeological site, in November 2007. The company managed to acquire the 30-year lease contract against competitors from Russia, the United Kingdom, Canada and the United States. China will invest $3 billion in Mes Aynak which is valued at more than $90 billion.

The contract contains two important clauses: (1) construction of a coal-fired power plant for mining purposes (with environmental consequences) and (2) construction of a freight carrying train line connecting West China to Mes Aynak through Tajikistan to be further extended to Quetta in Pakistan.

At the first trilateral dialogue between China, Afghanistan and Pakistan in Beijing on December 26, 2017, Afghanistan agreed to join CPEC despite prior hesitation at the behest of India which opposes CPEC, among other reasons, as it passes through the strategically located Pakistan-occupied Kashmir region of Gilgit-Baltistan which borders the Wakhan Corridor of Afghanistan to the north, the Xinjiang region of China to the east and northeast, and the Indian-occupied state of Jammu and Kashmir to the southeast. As part of China’s New Silk Road project, Afghanistan also favors construction of a network of roads and railway lines linking it to the Caspian Sea, Mediterranean Sea and eventually to Europe through Turkmenistan, Azerbaijan, Georgia and Turkey. The Lapis Lazuli Corridor involving Afghanistan, Turkmenistan, Azerbaijan, Georgia and Turkey was signed in November 2017 to this effect. 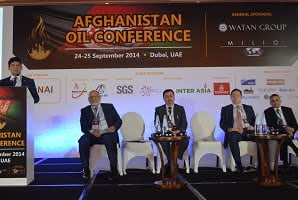 In December 2011, Afghanistan signed its first international oil exploration contract with China National Petroleum Corporation. China, with an investment of $3 billion, won the 25-year contract for the exploration and exploitation of oil in Amu Darya region of northern Afghanistan (Sar-i-Pul and Faryab provinces). It is estimated that the Amu Darya Basin between Tajikistan and Afghanistan contains more than 1.6 billion barrels of crude oil. China’s local partner in the project is “Watan Group” of companies related to Hamid Karzai whose decision to refrain from signing the “Bilateral Security Agreement” with the United States may well be connected to these Chinese investments. It is also estimated that other reserves in Balkh and Jawzjan Northern provinces contain 3.5 billion barrels of crude oil. The contract for the latter reserve was awarded in 2013 to an international consortium including Dragon Oil from the UAE, the Turkish Petroleum Corporation (TPAO) and their local Ghazanfar Group from Afghanistan.

The Sino-Afghan Special Railway Transportation that connects China, through Kazakhstan and Uzbekistan, with northern Afghanistan (Hairatan port), a vital segment of the One Belt, One Road initiative, was inaugurated as the first-ever freight train line between the two countries in September 2016. The railway link was a joint project of China’s Qin Geng Industrial Co. Ltd and the local Watan Group. However, the link is yet to become fully operational due to India-leaning Uzbekistan’s refusal to allow direct export of Afghan goods through its territory to China.

In January 2017, China Road and Bridge Corporation (CRBC) signed a $205 million contract to build the 178-kilometer Dare-e-Sof–Yakawlang road project connecting the northern Samangan with central Bamyan province. This is the second phase of the National North-South Corridor. The now completed first phase was Mazar-i-Sharif – Yakawlang road and the third, yet to commence, being the 550km central Bamyan– southern Kandahar road project.

At first glance, it seems that China has made these lucrative deals at the expense of the security cover provided by NATO-US troops. Nothing could be further from the truth. The start of extraction work of the Chinese workers at Mes Aynak copper mine under the security coverage by 2,000 government troops coincided with the popping up of armed groups which specifically targeted Chinese workers forcing a halt to extraction and their return home.

Similarly, the start of extraction of crude oil by the Chinese in Sar-i-Pul and Faryab provinces was met with attacks by armed groups targeting the Chinese and efforts to destabilize these provinces. Six ICRC staff members were killed in Jawzjan province in February 2017 with no claims of responsibility by any group. In recent months, IS fighters many of them foreigners were moved to the north of Afghanistan where they have established a foothold in Sar-i-Pul, Faryab and Jawzjan provinces.

There are also intensified efforts to destabilize Xinjiang and encourage separatism there through the Afghan northeastern province of Badakhshan, a main route in the ancient Silk Road, which shares borders with Tajikistan to the north and east and China’s Xinjiang and Pakistan to the east through the historical Wakhan Corridor. The separatist East Turkistan Islamic Movement (ETIM) is believed to be mainly operating in Badakhshan. Xinjiang is an

The New Great Game Moves From Asia-Pacific to Indo-Pacific

Chabahar and Gwadar Agreements and Rivalry Among Competitors in Baluchistan Region

US Ramps Up Its "Battle" for Africa
Opinion
AfghanistanChinaCPECOBORPakistanUS