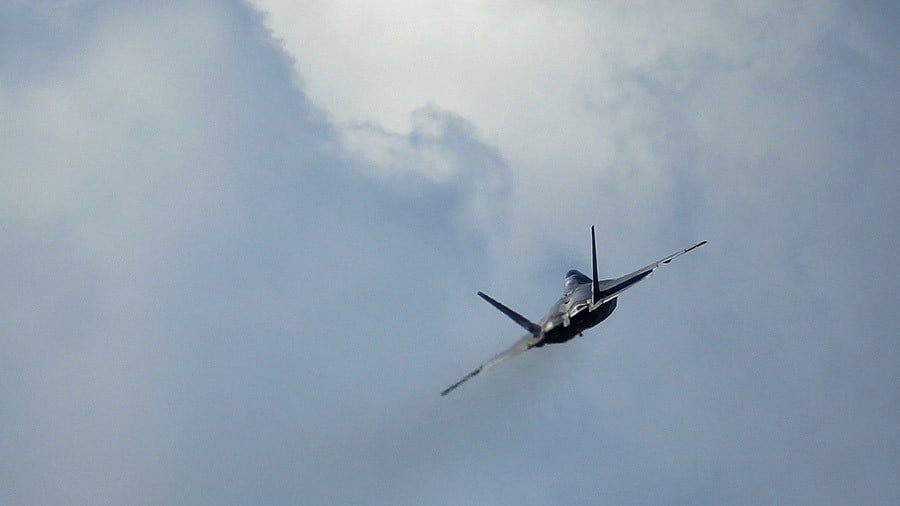 Last night the illegal U.S. occupation force in north-east Syria attacked a group of Syrian government aligned troops and their Russian support. The incident happened north-east of Deir Ezzor city on the east side of the Euphrates. The U.S. claims that it killed some 100 Syrian soldiers that were allegedly attacking its proxy forces in an attempt to recover oil fields.

An small area across the Euphrates north-east of Deir Ezzor had been taken by Syrian government forces months ago. It is near some oilfields which the U.S. wants to keep away from the Syrian government. 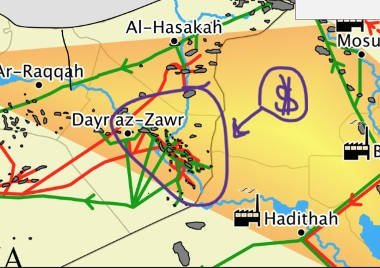 “The U.S. wants to keep Syria weak and poor,” says Prof. Joshua Landis. According to Landis the U.S. is keeping the north-east of Syria under occupation to deny Syria access to its oil and its best agricultural land. It wants to turn Syria into a swamp for Russia and Iran to the benefit of mostly Israel.

The valuable oil and gas fields are currently in the hands of local Arab tribes who earlier worked with the Islamic State and are now, the U.S. claims, allied with the YPG/PKK Kurds under the name Syrian Democratic Forces. The SDF is the U.S. local proxy force for its occupation.

On the Syrian government side in Deir Ezzor are a few Syrian troops, local militia from the area, as well as members of Russian private military contractor named Wagner Group. Wagner allegedly has a contract with the Syrian government that will give it some 25% of all revenues from oil-fields it recovers and protects.

Last night the U.S. military announced that it had “self defended” against an attack by Syrian government troops on Syrian ground:

Coalition service members in an advise, assist, and accompany capacity were co-located with SDF partners during the attack eight kilometers east of the agreed-upon Euphrates River de-confliction line.

In defense of Coalition and partner forces, the Coalition conducted strikes against attacking forces to repel the act of aggression against partners engaged in the Global Coalition’s defeat-Daesh mission.

The heavy death toll underscored the large size of the attack, which the U.S. official said included about 500 opposing forces, backed by artillery, tanks, multiple-launch rocket systems and mortars. The official spoke to Reuters on condition of anonymity.
…
No American troops were killed or wounded in the incident, officials said.

Some U.S. troops had been embedded at the time with Syrian Democratic Forces (SDF), whose headquarters in Syria’s Deir al-Zor province had been a target of the attack.

One SDF fighter was wounded, the official said.

The U.S.also claims that it had seen preparations for the Syrian move and had warned the Russian command in Syria in advance:

The U.S.-led coalition had alerted Russian officials about the presence of SDF forces in the area far in advance of the thwarted attack, the U.S. official said.

Other sources say that there have been talks between Wagner and locals Arabs guarding the currently unproductive “Conoco” oil and gas field operation near the town of Khisham.

Hassan Hassan @hxhassan – 12:17 AM – 8 Feb 2018
5. Interesting, about a week ago, local reports also suggested an imminent deal to hand over the plant to the regime through an Arab faction within the SDF.

A translation of an earlier report from the opposition Al-Etihad media seems to confirm that some deal had been made:

Activists said Assad forces and Shiite militias have gathered near the villages of Bakkara Akidat, Dahla and Sabah in the eastern suburbs of Deir-ez-Zor (east of the Euphrates) near the Conoco gas field, which is controlled by Kurdish forces.

The sources added that the Kurdish-dominated Syrian Democratic Forces informed the U.S.-led coalition forces of these developments. The coalition urged SDF fighters not to resist the regime forces and surrender the area.

The activists added that the SDF has already withdrawn heavy weapons from their areas held by Arab and Turkmen factions.

Might this whole operation have been a trap? The U.S. military clearly knew that something was going to happen in the area. Local deals were made between the Syrian government side and locals Arabs holding the oil fields. The U.S. told the SDF to move out of the way. When the government aligned groups started to take over the field, as presumably agreed upon, the U.S. bombed them.

The “attack on coalition forces” the U.S. claimed as justification for its bombing seems not to have taken place at all. How else does one explain that sole casualty of the claimed battalion size attack with strong artillery support is “one wounded SDF” fighter? A later U.S. military statement to a journalist seems to be vague about the reality of an attack:

After 20 to 30 artillery and tank rounds landed within 500 meters of the SDF headquarters location, Syrian Democratic Forces supported by the Coalition targeted the aggressors with a combination of air and artillery strikes.

Is the U.S. military emphasizing the “SDF headquarters location” because the headquarter was no longer there as the SDF had already withdrawn from it? And why is a tank round landing some 500 meters away seen as a direct attack? Tanks rounds may deviate from the targeted point by a meter or two. There is no chance that rounds landing some 500 meters away were intended to hit the headquarter location. Whatever the Syrian forces have been hitting at, if they hit at all, was not the SDF headquarter location.

The story the U.S. military is trying to sell here stinks.

The incident seems comparable to the unprovoked U.S. attack on Syrian troops in September 2016. That air attack killed 100 Syrian troops who were then encircled and holding out against Islamic State forces. At that time it nearly enabled the Takfiris to eliminate that last Syrian government position in the east.

There has recently been a chain of provocations against Russian and Syrian forces in Syria. Two massive drone swarm attacks were directed against the Russian air-port in Hememim and its naval base in Tartus. This week well targeted mortar rounds from east-Ghouta have hit the Russian trade mission in Damascus and severely damaged it. A Russian aid-distribution point in Damascus was similarly attacked just while leaders of some Russian non-government organizations were visiting it. Over Idleb a Russian jet was shot down with a rare MANPADS. All three were beyond the material and intelligence capabilities of the “rebel” forces.

The ludicrous “chlorine gas attack” propaganda against Syria is back in full force. Despite an Russian-Turkish-Iranian de-escalation agreement with Turkey, al-Qaeda and other “rebel” forces in Idleb governorate still seem to receive unlimited supplies through Turkish borders. Israel is attacking targets in Syria and tries to extend its occupation of the Golan heights.

The U.S. war against Syria and its allies continues with full forces even while the U.S. pretends that no such war is happening at all. The intend to create the swamp Prof. Landis talks about is hidden behind clandestine operations, “self defense” action and “humanitarian” blubber.

The U.S. should be careful. More than one side can play dirty games. Its troops in north-east Syria have thin supply lines and are not well protected. They, as well as U.S. forces in Iraq, are vulnerable to clandestine activities of the other side. I would not be surprised at all should they suddenly receive some unwanted and very bloody attention. 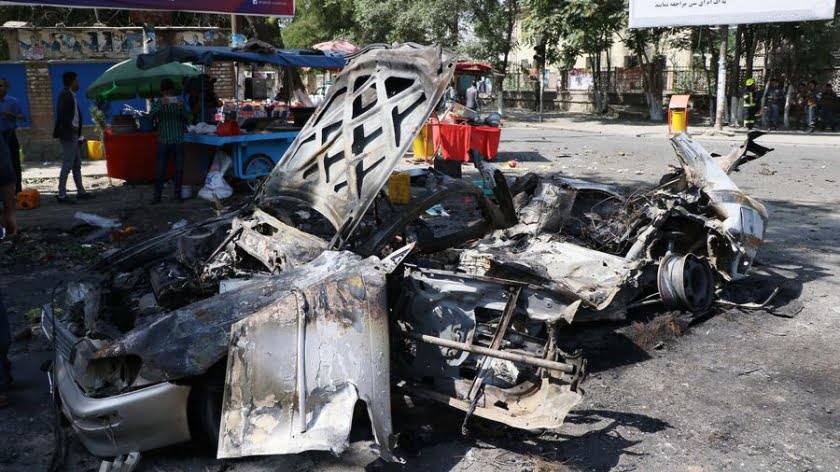 The government forces of Syria supported by Russian warplanes have defeated a large group of Islamic State fighters in the Raqqa governorate, the Russian defense ministry reported. The offensive operation resulted in the defeat of the “most capable and best armed group of ISIL in the Euphrates River valley” the ministry said in a statement,… 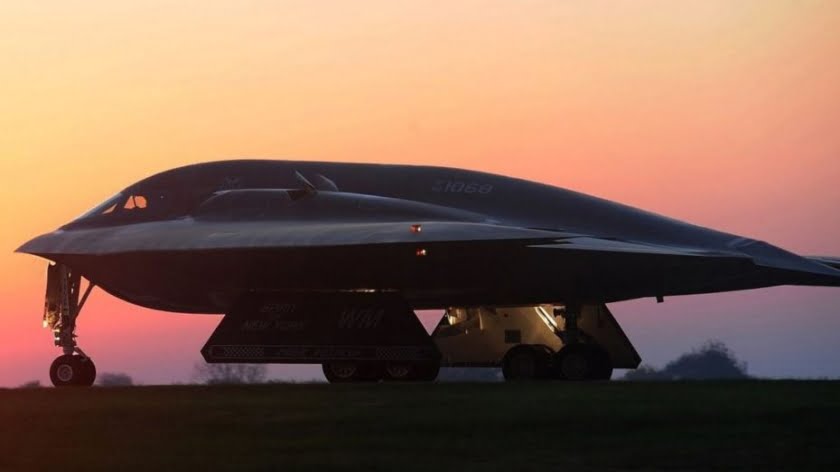