RAND Corporation Proves Link Between US Military and Hybrid War

As with mostly anything that comes out of a US government-funded “think tank”, the findings don’t directly pin the blame on America for destabilizing other countries but they come close enough in proving a clear link between the US military and Hybrid Wars, though of course without presenting this relationship in a negative light or implying that the Pentagon is responsible for it.

Sputnik reviewed a recently published book by the RAND Corporation in an article titled “US Military Aid Increases Odds of Civil War, State Repression in Recipients”, which reported that the “think tank’s” study on “U.S. Presence and the Incidence of Conflict” purportedly proved that there’s a scientifically verifiable correlation between the US military and certain types of conflicts. Upon skimming through the lengthy 152-page source document, that’s indeed the case, but the finer details revealed in the project’s findings deserve to be touched upon more in depth. Readers who don’t have the time to consult the original material might find it easier to go through the 2-page bullet point research synopsis instead, though they still won’t be getting the full picture.

Having said that, interested individuals should start by drawing their attention to Chapter 4, which concentrates on the “Empirical Assessment of U.S. Troop Presence and Interstate Conflict Behavior”. This is what the researchers concluded about the topic after conducting a complex statistical analysis using their unique methodology:

* U.S. Troop Presence Near Potential Target States Is Associated with a Lower Likelihood of Interstate War

* U.S. Troop Presence Near Potential Initiator States Is Associated with a Lower Likelihood of Interstate War

* U.S. Troop Presence in Target States Is Associated with a Greater Likelihood That a Potential U.S. Adversary Will Initiate High-Intensity Militarized Behavior

* Nearby U.S. Troop Presence Is Associated with a Lower Likelihood of High- and Low-Intensity Militarized Behavior by U.S. Allies

* Nearby U.S. Troop Presence Is Associated with a Greater Likelihood That the United States Initiates High- and Low-Intensity Militarized Behavior 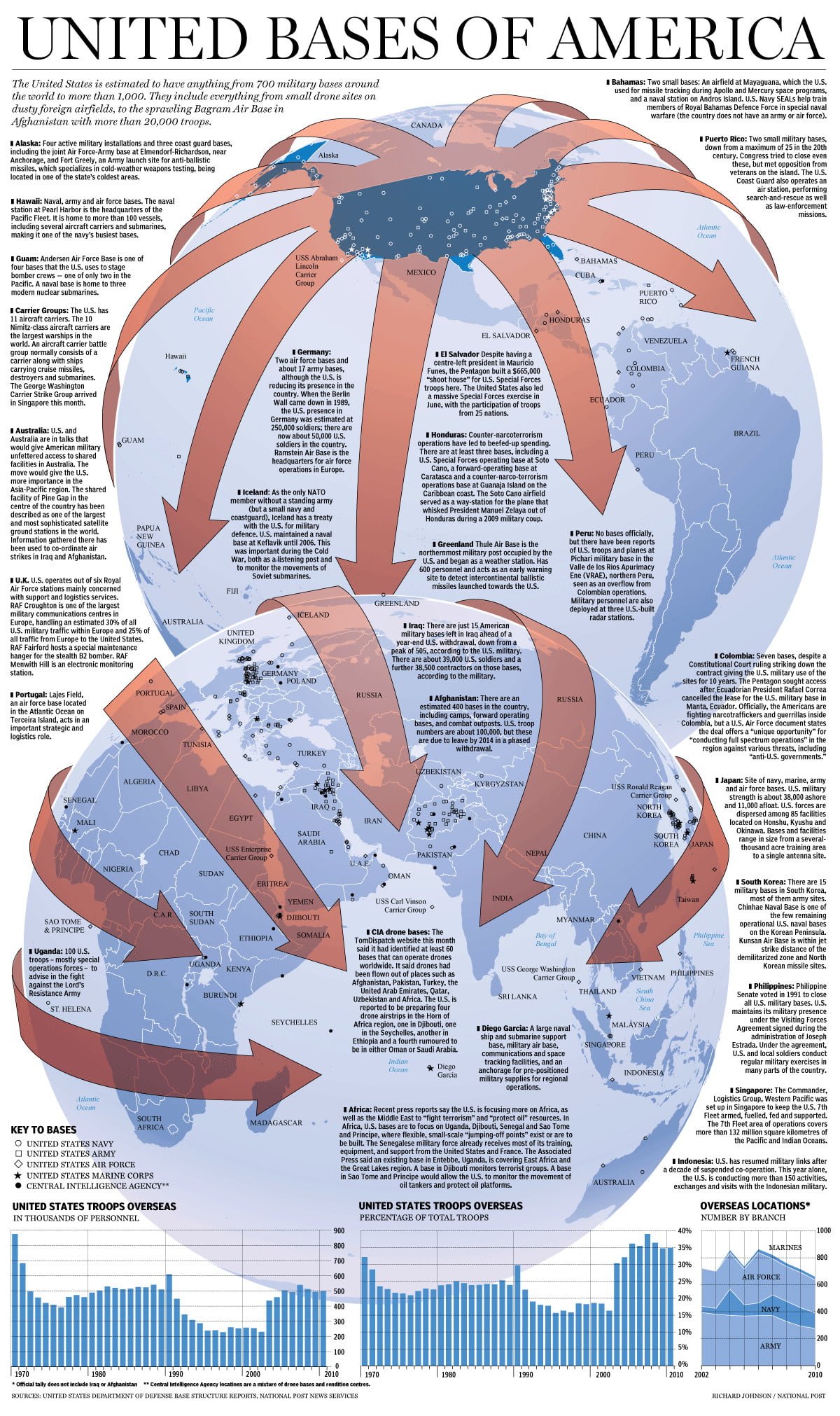 Basically, while US troop presence seemingly deters the incidence of international war, it actually contributes to “a greater likelihood of low-intensity militarized behavior”, which is just a euphemism for Hybrid War. The author described what this entails in his book on the general topic and subsequent multi-volume series detailing over 45 country studies related it whose scenarios could be advanced in order to disrupt, control, or influence China’s Silk Road projects through the exploitation of preexisting identity conflict variables in the targeted states. As it relates to the RAND study, there’s a clear relationship between US troops in “Lead From Behind” proxy states and an outbreak of Hybrid War in the theater, though the organization of course portrays this as not being related in any way do the US’ own policies but instead as a reaction to the so-called “potential US adversary” that was being targeted all along.

Either way and regardless of who initiates it (or as is probably case, if the targeted state proactively defends itself after being provoked, possibly through a false flag “rebel”/terrorist raid into its borders), more often than not the end result of a nearby US troop presence is nevertheless a category of conflict that is best described according to the author’s Hybrid War model.

Looking further, similar insight can be gleaned from Chapter 6 of the RAND Corporation’s study on the “Empirical Assessment of U.S. Presence and Intrastate Conflict Behavior”, which delves more deeply into the nuances of Hybrid War inside of states that are either hosting US troops or receiving military assistance from the Pentagon. Here’s what they claim to have discovered:

* U.S. Troop Presence Is Not Associated with Increased State Repression

* U.S. Troop Presence Is Not Associated with the Likelihood of Anti-Regime Activities

* U.S. Troop Presence Was Associated with LessIntrastate Conflict During the Cold War and More in the Post–Cold War Period

The first thing to notice is that there’s a clear distinction between US troops and military assistance, as well as the Cold War and post-Cold War eras. According to the 10 people involved in writing this report, the presence of US troops doesn’t generally make a difference one way or another whether the host government resorts to heavy-handed measures in dealing with unrest or not, nor does it apparently have an effect on provoking the rise of anti-government movements in those countries. Nowadays, though, deployment of US forces abroad is associated more with intrastate conflict in the post-Cold War period than beforehand, though this might be due to the Pentagon’s “Global War on Terror” focus on the “Global South” (“Third World”) countries that function coincidentally or not as the transit states along China’s Silk Road networks (a.k.a. the prime targets of Hybrid War).

US military assistance, however, has an altogether different effect on the battlespace, with the report writing that it actually increases what they term as “state repression” in the recipient states. During the Cold War-era, this was presumably dispatched in order to prevent or respond to communist insurgencies, but it seems to have had a circular effect of feeding these conflicts. The statistical analysis curiously doesn’t account for this happening in the present in the present day despite admitting that it does lead to more “state repression”, but the reason for this is probably because the comparatively more advanced military and surveillance technologies employed today are much more effective at detecting “threats” in advance and proactively eliminating them, even if they’re not necessarily the “terrorists” that US-allied governments nowadays have a tendency of labelling them as.

Despite recognizing this possibility, it shouldn’t be discounted that the penultimate finding of “U.S. Troop Presence [Being] Associated with Less Intrastate Conflict During the Cold War and More in the Post–Cold War Period” might not entirely be because of where the Pentagon chooses to deploy, which could be in reaction to an outbreak of terrorism in any given country but one that was prepared to occur beforehand by the CIA and other intelligence agencies whose activities aren’t included in the RAND Corporation’s analysis. Accordingly, the criteria that they use for defining “intrastate conflicts” should be examined as well, as they define this in the context of their study as being “anti-regime campaigns in which domestic opposition groups initiate a coordinated and sustained campaign aimed at achieving maximalist goals against the incumbent regime, have a clear organizational structure, and include at least 1,000 participants” or “full-scale civil wars”.

While they importantly clarify that their definition does indeed include “campaigns [that] employ…non-violent tactics…since even nonviolent movements can radicalize or escalate their tactics”, which is a clear allusion to Color Revolutions and their predisposition to morph into Unconventional Wars in accordance with the author’s Hybrid War theory, this still prevents the study from incorporating some levels of modern-day terrorism that fall below their stipulated threshold of being an “intrastate conflict”. The relevance that this has to the analysis is that the “think tank’s” conclusions might be fundamentally flawed and therefore (whether deliberately or not) paint an inaccurate picture of the relationship between US military assistance and intrastate armed conflict in the post-Cold War period (the so-called “Global War on Terrorism”), thus hiding the Pentagon’s true relationship to anti-Silk Road Hybrid Wars.

In any case, despite its possible flaws and academic limitations (to say nothing of the culture of pro-Establishment “political correctness” that permeates such institutions), the RAND Corporation’s study is still an insightful document that inadvertently proves that there is a correlation between the US military and Hybrid War. As the clichéd saying in this field goes, “correlation doesn’t prove causation”, and while this is “technically” true in the confined “scientific” context of the research, the takeaway that objective observers should have from this report is that it nevertheless amounts to another piece of evidence in building the argument that such a relationship does in fact exist. When the findings from this report are incorporated into other analyses like what the author demonstrated in this article, the pertinent conclusion is that there are statistical grounds for suspecting the US military’s involvement in whatever Hybrid War that it’s accused of complicity in.