Even before Donald Trump won the White House, there were strong indications that something was not quite right with the Liberal mindset. Today, all doubt on the matter has been cleared away.

The mass hysteria that swept across Liberal America, like one giant tear tsunami, following Hillary Clinton’s ‘surprise’ loss in the 2016 presidential election has reached a new level of madness and can now be described as a deep-seated psychosis.

There are some understandable reasons for the Left’s collective mental breakdown. Briefly, ‘Russiagate’ is disintegrating into a burlesque theater of the absurd, while Trump – from jump-starting the Heartland’s industrial sector, to making peace with a nuclear-armed dictator, to ‘winning’ the World Cup – is on a serious roll. If the momentum continues, it may give the Republicans a crucial victory in November congressional midterms. The Democrats, acutely aware as to what is at stake yet unable to stop Trump, are showing a side of their character that can be best described as treacherous. And in order to see the symptoms of a disintegrating Democratic Party one only need look at the US entertainment industry.

For example, actor Robert DeNiro, one of the most outspoken Hollywood critics of Trump, forced his captive audience at the recent Tony Awards to sit through an invective against the US leader, which started with the juvenile comment, “F*ck Trump!” Just in case his audience – which may have included some minors, not to mention Republicans – did not hear him the first time, DeNiro repeated it. The pathetic outburst, which was certainly not the first time a fading Hollywood star has used the pulpit at an awards ceremony to make a weak political impression, won DeNiro a cheap standing ovation.

Back in January 2017, before Trump was even moved into Pennsylvania Avenue, actress Meryl Streep pulled a similar stunt, lecturing the president on the diverse composition of US society in general and Hollywood in particular: “Hollywood is crawling with outsiders and foreigners and if we kick them all out, you’ll have nothing to watch but football and mixed martial arts, which are not the arts,” Streep said, a comment that reinforces the idea that actors should just stick to their scripts instead of venturing into the minefield of politics.

In between those dual diatribes by two famous Hollywood has-beens have been countless other deranged Liberal stunts, including the moment when ‘comedian’ Kathy Griffin released a photograph of herself holding Trump’s ‘severed head’ aloft, to Johnny Depp making a veiled threat to assassinate the president.

“When was the last time an actor assassinated a president,” Depp asked concertgoers in Glastonbury, a reference to the assassination of Abraham Lincoln by John Wilkes Booth, an actor.

However, all that was mere dress rehearsal for the outrageous and very revealing comments by Bill Maher, a popular and provocative HBO talk show host.

“I feel like the bottom has to fall out at some point. And by the way, I’m hoping for it,” Maher commented last week. “Because I think one way you get rid of Trump is a crashing economy. So please, bring on the recession … Sorry if that hurts people, but it’s either root for a recession or you lose your democracy.”

At first, that may have sounded like a courageous comment until one realizes that Maher, who earns enough money to have donated one million dollars to back Barack Obama’s 2012 reelection efforts, won’t feel any of the repercussions from an imploding economy. From the relative safety of his high-security neighborhood, people like Maher will only feel the consequences from economic ruin vicariously via CNN, MSNBC and a host of other hyper-Liberal news channels that would be only too happy to provide 24/7 coverage on the ensuing chaos. 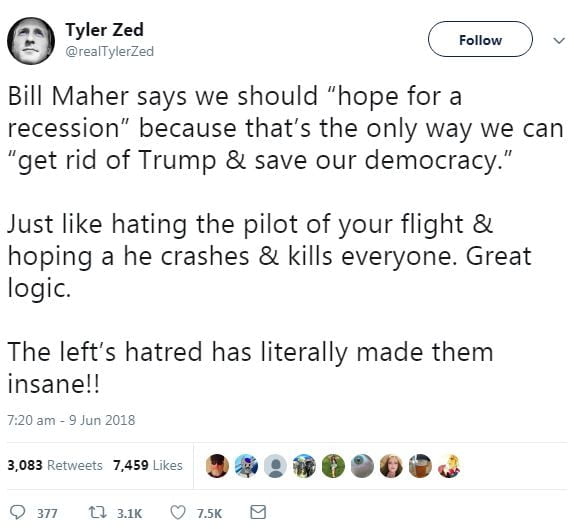 Maher’s comment speaks volumes about the true nature of the so-called progressive Liberals. Despite all of their virtue signaling and identity grandstanding about the various groups, sexes, religions, nationalities and other various subsets that make up the colorful quilt of America, they clearly have no interest in the welfare of the people.

A good example of this political opportunism came in the Obama era when a non-stop avalanche of cultural experiments were put to work further dividing and conquering the country into atomized, bite-size pieces, ready for easy consumption by the Democrats come election day. In an effort to appear ‘progressive’, a term with no real meaning or sense anymore, Liberals will popularize any cause, however base and diabolical, even if it serves to destroy the very fabric of the nation.

Witness the transgender movement, for example, which the Obama administration practically forced on the American people without any debate in the matter. Under Obama, public schools were told to either allow transgender students the right to use the bathroom of their choice or lose federal support. Here we have a prime example of ‘social justice warriors’ more concerned with guaranteeing the rights of a minuscule part of the population, while ignoring the millions of women and children who will feel rightly threatened with the prospect of sharing a bathroom or changing facility with a male. Much to its credit, the Trump administration put an end to that nonsense.

Beyond America’s borders, where was the seething outrage and visceral hate of the social justice warriors (in reality, snowflakes) when Obama was bombing parts of the Middle East back to the Stone Age? Where were the Academy Award rants as the Nobel Peace Prize winner was raining hell down on innocent civilians? What it have mattered if they knew that Obama dropped over 26,000 bombs in the last year of his reign? Or does ‘social justice’ only apply to Americans? These itinerant ‘warriors’ simply do not care, and have been able to shut down any debate they deem inappropriate – even on college campuses, once the flashpoint for anti-war protests.

The dripping self-righteousness and perceived moral authority of the Liberals is simply nauseating, especially when it is understood that no other group is in reality more supportive of military action than they are.

Indeed, the only time Trump won a golf clap from these warmongering hypocrites was when he bombed, however tepidly, a Syrian airfield following an alleged chemical attack by Syrian forces in April 2017.

I am tempted to believe that Trump tossed these psychopaths the bone of military conflict just to expose them for the real ‘social warriors’ they really are.

Nigeria's Racing Towards a Nightmare Scenario

American Militarism Marches On: No Discussion or Media Coverage of Washington’s War Against the World

United (Socialist) States of America? Trump-Biden Showdown is a Battle for the Capitalist Soul of the Country