President Trump outraged European opinion by denouncing his allies on the far side of the Atlantic for their failure to meet NATO’s spending target of 2% of GDP.

Other alliance members, he added, should spend 4% of their output on defense, just like America does. His dudgeon at the Europeans was more than justified: the Europeans really are deadbeats who don’t pay their fair share of the cost of defending their own countries and leave the burden in the hands of American soldiers and taxpayers.

Trump’s remonstrations will fall on deaf ears. Why should Europeans spend money on arms, when they have no intention of using them?

A recent opinion poll found that small minorities in the core European members of NATO were willing to fight for their country under any circumstances. 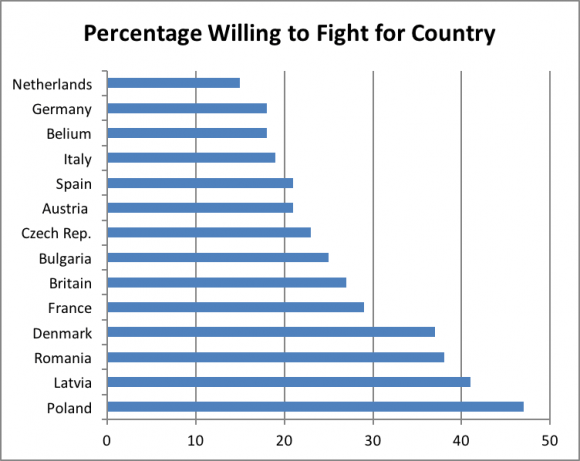 At the bottom of the rankings were the Netherlands and Germany, at 16% and 18% respectively; at the top was Poland, with 48%. Outside of European NATO, 56% of Russians, 66% of Israelis, 44% of Americans and 74% of Finns said they were willing to fight. The Israeli number reflects the diffidence of Israeli Arabs, who comprise about one fifth of the population. One wonders what would happen if Finland were to invade the Netherlands.

If you don’t plan to fight, you don’t need weapons, and it is no surprise that Germany, with its budget surplus, can’t bring itself to vote for urgently-need funds for its military. Germany’s armed forces are in disrepair; a German brigade designated to lead a NATO rapid response force has only nine of the 44 tanks it requires and only four of the country’s military aircraft are combat ready.

If there’s nothing you’re willing to die for, there’s probably nothing you’re willing to live for, either, I argued in a 2014 essay on the hundredth anniversary of the First World War (see “Musil and Meta-Musil”). It should be no surprise that there is a reasonably close correspondence between the willingness of the Europeans to fight for their nations and their willingness to have children. If you care so little for your country that you will not defend it, you are likely to be too absorbed in hedonistic distraction to bother with children. Conversely, if there are to be no future generations, who will lay down his life to fight for them?

The chart below compares the total fertility for European countries (and adds Israel for good measure; that’s the lonely dot in the upper-right-hand quadrant). The r2 of regression is about 50%, with significance at the 99.9% confidence level. 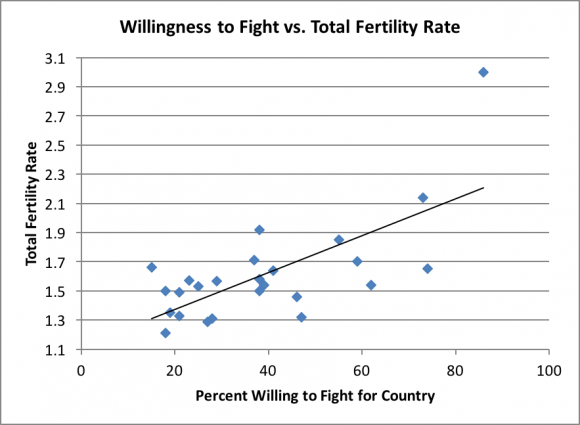 Russia is indeed a potential threat to NATO, although the likelihood of a Russian attack on any NATO member is vanishingly small for the interim. The Russians are willing to fight, unlike the Western Europeans. Coincidentally, Russia’s total fertility rate has recovered remarkably and now stands about 1.7 children per female, close to that of the United States – and from the available Pew Survey data, that rate applies to European Russians as well as to Russian Muslims. 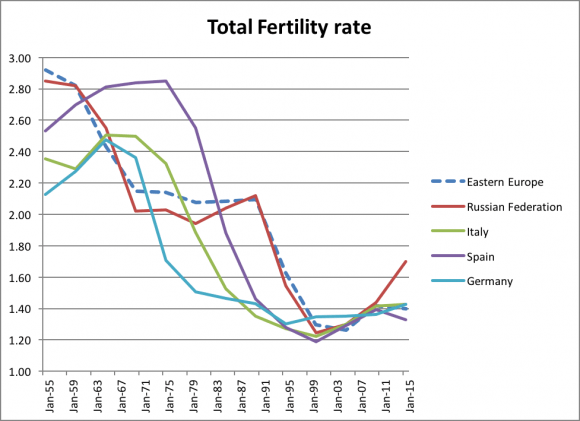 Russia remains below replacement fertility – about 2.1 children – and its population continues to decline, but far less quickly than the consensus believed it would only a few years ago. Vladimir Putin runs a nasty regime in which nosy journalists fall out of windows and regime opponents disappear, but Russia nonetheless has succeeded in reviving something of its national spirit where the Europeans have not.

The matter of dying for one’s country always has constituted a paradox in classical liberal thinking, by which I mean the viewpoint of Thomas Hobbes and John Locke, the English philosophers who argued that governments are formed by individuals who feel insecure in a “state of nature” and cede some of their personal sovereignty to the state in return for protection of life and property.

The idea is preposterous, but sadly influential. If governments are formed by individuals solely to protect their sorry persons and filthy lucre, why would any of these individuals lay down his life to defend the government, allowing those who do not die to benefit as free riders? In Locke’s day, to be sure, the British Army hired starving Irishmen and dispossessed farmers to do its fighting. When Napoleon unleashed the full force of citizen armies upon his European neighbors, classical liberalism had nothing more to say.

Something more than Locke’s notion of a mutual protection society is required if we are to justify the state’s monopoly of violence, its right to imprison or kill criminals at home, and to demand of its young people that they shed blood in its defense. The state must be imbued with a sense of the sacred and must stand surety for the continuity of our lives with those of generations that follow. It must preserve a heritage and a culture that allows our words and deeds to speak to future generations just as those of our ancestors speak to us.

Today’s Europe is something of a Lockean dystopia: It is composed of individuals concerned mainly about their own hedonic enjoyments, who want the government to protect them from want and disease, but have no desire whatever to defend their nations, which are on a slow boat to extinction in any event.

It is refreshing to hear an American president call the Europeans out for the sybarites and deadbeats they are, rather than repeat the old cant about the glories of the Atlantic Alliance and the gallantry of America’s allies.

Is a Coming NATO Crisis Inevitable?

Why the Nuclear War Is No Longer Unthinkable?

Trump to Germany: Go Jump in the Rhine

Breakup of the West?