The Downfall of US Nuclear Power

A new, shocking report discovered that the US nuclear power industry could be on the verge of a collapse — a reality that many have yet to realize.

The report was issued by researchers at Carnegie Mellon University’s Department of Engineering and Public Policy (EPP), Harvard University, and the University of California San Diego School of Global Policy and Strategy.

Published in Proceedings of the National Academy of Science (PNAS), “US nuclear power: The vanishing low-carbon wedge” examined 99 nuclear power reactors in 30 states, operated by 30 different power companies. As of 2017, there are two new reactors under construction, but 34 reactors have been permanently shut down as many plants reach the end of their lifespan. 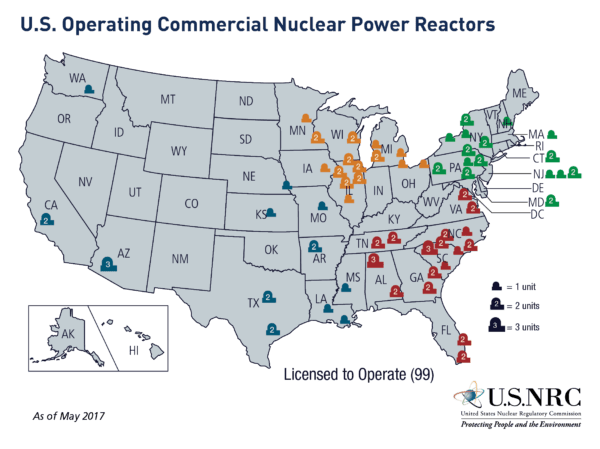 “We’re asleep at the wheel on a very dangerous highway,” said Ahmed Abdulla, co-author and fellow at the School of Global Policy and Strategy at UC San Diego. “We really need to open our eyes and study the situation.”

For more than three decades, approximately 20 percent of US power generation has come from light water nuclear reactors (LWRs). These plants are now aging, and the cost to service or upgrade them along with fierce competition from Trump’s economic order to prop up failing coal and heavily indebted shale oil/gas companies make nuclear power less competitive in today’s power markets.

In return, the American shale boom could trigger a significant number of US nuclear power plant closures in the years ahead, the researchers warned. The country is now at a critical crossroad that it must abandon nuclear power altogether or embrace the next generation of miniature, more cost-effective reactors.

The researchers noted that small modular reactors might play a significant role in US energy markets in the next few decades. This new design would effectively swap out the current aging, LWRs that the Atomic Energy Commission allowed to rapidly expand across the country in the 1960s and after. The researchers described several scenarios where new nuclear power plants could be used to back up wind and solar, produce heat for industrial processes, or serve military bases.

Given the current market structure and policy dynamics, the researchers were not convinced that nuclear power would be competitive in the future power market.

While efforts continue to advance batteries for storing electricity from solar and wind, utilities have made an impressive push into natural gas. As of 2018, fossil fuel now produces nearly 32 percent of US power.

Given the impending collapse of the nuclear industry, the researchers questioned whether renewable energy would be enough to offset losses from retiring nuclear power plants.

“The reality is you cannot actually replace 20 percent of the need with wind and solar, unless you want to wallpaper every square inch of many states,” said Christian Back, vice-president of nuclear technologies and materials at General Atomics. “It’s not efficient enough.”

Back said with the right political support, nuclear reactors operating today could be retrofitted to increase safety and lifespan, while smaller, more cost-effective ones could be strategically placed on the grid.

“This is a situation like Nasa when you’re putting someone on the moon where the government needs to recognize the long-term benefit and investment that’s required and help support that,” Back added. “This is where political will matters.”

Researchers also suggested that many civilians overlook nuclear energy and do not realize the urgency of the situation.

In the article’s conclusion, the researchers warn, “It should be a source of profound concern for all who care about climate change that, for entirely predictable and resolvable reasons, the United States appears set to virtually lose nuclear power, and thus a wedge of reliable and low-carbon energy, over the next few decades.”