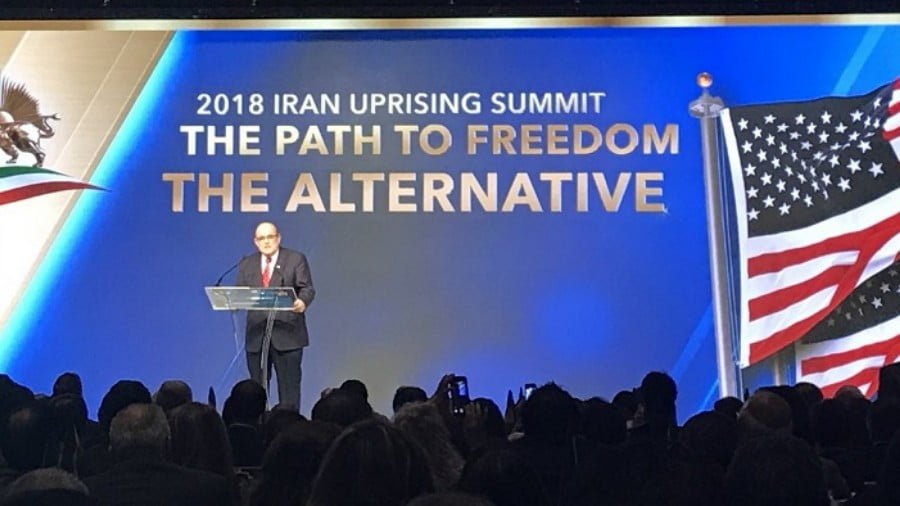 A terrorist attack on a military parade targeting civilians and military personnel alike left at least 29 dead and up to 70 more wounded in Iran’s southwest region of Ahvaz.

At the same time, in New York City, US political figures including US President Donald Trump’s lawyer Rudolph Giuliani attended and expressed open support for “revolution” in Iran at the 2018 Iran Uprising Summit organized by Mojahedin-e Khalq (MEK).

MEK is a terrorist organization that has previously killed US service members and civilian contractors, but was removed from the US State Department’s Foreign Terrorist Organizations list in order for the US to more openly and directly support the terrorist front’s efforts to destabilize and overthrow the Iranian government.

The Iranian government has blamed the Al Ahvaziya terror organization for the September 22 attack.

According to the BBC, Al Ahvaziya has also taken credit for the attack – yet the BBC – along with other media fronts across the West as well as Western governments – has refused to characterize Al Ahvaziya as a terrorist organization and instead depicted it as an “anti-government Arab group.”

A spokesman for the Ahvaz National Resistance, an umbrella group that claims to defend the rights of the Arab minority in Khuzestan, said the group was behind the attack.

Yet the same BBC in 2006 after a similar attack in Ahvaz, Iran would clearly characterize the group’s activities as terrorism and would even quote the UK Foreign Office who condemned the attack as terrorism while denying accusations the British government had been covertly backing the terrorists.

The BBC in its 2006 article titled, “Iran accuses UK of bombing link,” would claim:

“Any linkage between HMG (Her Majesty’s Government) and these terrorist attacks is completely without foundation,” said the official.

The failure of the US and British governments to now wholly condemn the recent Ahvaz attack as an act of terrorism carried out by what is undeniably a terrorist organization, alone raises suspicions. However, US policy papers have revealed a long-term open conspiracy to back armed militancy in Iran, just as the US, UK, and their allies have been exposed currently doing in nearby Syria as well as Libya in 2011.

As Iran grieved in the wake of the Ahvaz attack, US politicians hosted MEK terrorists in New York, vowing to overthrow the Iranian government.

Reuters in their article, “Trump lawyer Giuliani says Iran’s government will be overthrown,” would report:

President Donald Trump’s personal lawyer Rudy Giuliani on Saturday said that U.S. sanctions on Iran are leading to economic pain that could lead to a “successful revolution” contrasting with administration comments that government change in Tehran is not U.S. policy.

“I don’t know when we’re going to overthrow them,” said Giuliani, who spoke in his own capacity though he is a Trump ally, at an Iran Uprising Summit held by the Organization of Iranian-American Communities, which opposes Tehran’s government.

Reuters would intentionally avoid naming the National Council of Resistance of Iran (NCRI) and MEK as the event’s organizers – and would even crop a photo for their article of Giuliani speaking to hide the NCRI’s logo.

While defenders of US support for MEK claim the group has reformed itself, US policy papers reveal that MEK was delisted specifically so the US could more openly use the group to carry out armed subversion against the Iranian government on Washington’s behalf.

It should be noted that Giuliani, current National Security Adviser John Bolton, and many other prominent US politicians had lobbied for, and attended MEK events long before the US State Department delisted it as a foreign terrorist organization.

The Brookings Institution in a 2009 policy paper titled, “Which Path to Persia? Options for a New American Strategy Toward Iran” (PDF), under a chapter titled, “Inspiring an Insurgency: Supporting Iranian Minority And Opposition Groups,” would openly admit (emphasis added):

Perhaps the most prominent (and certainly the most controversial) opposition group that has attracted attention as a potential U.S. proxy is the NCRI (National Council of Resistance of Iran), the political movement established by the MeK (Mujahedin-e Khalq). Critics believe the group to be undemocratic and unpopular, and indeed anti-American.

Brookings would elaborate regarding its terrorist background, stating (emphasis added):

Undeniably, the group has conducted terrorist attacks—often excused by the MeK’s advocates because they are directed against the Iranian government. For example, in 1981, the group bombed the headquarters of the Islamic Republic Party, which was then the clerical leadership’s main political organization, killing an estimated 70 senior officials. More recently, the group has claimed credit for over a dozen mortar attacks, assassinations, and other assaults on Iranian civilian and military targets between 1998 and 2001.

In the 1970s, the group killed three U.S. officers and three civilian contractors in Iran.

The group itself also appears to be undemocratic and enjoys little popularity in Iran itself. It has no political base in the country, although it appears to have an operational presence. In particular, its active participation on Saddam Husayn’s side during the bitter Iran-Iraq War made the group widely loathed. In addition, many aspects of the group are cultish, and its leaders, Massoud and Maryam Rajavi, are revered to the point of obsession.

Brookings would note that despite the obvious reality of MEK, the US could indeed use the terrorist organization as a proxy against Iran, but notes that:

…at the very least, to work more closely with the group (at least in an overt manner), Washington would need to remove it from the list of foreign terrorist organizations.

And while Al Ahvaziya is accused of carrying out the Ahvaz attack, it should also be noted that MEK “networks” specifically in Ahvaz have helped promote and carry out violence ranging from riots to arson for months – openly admitted to by MEK “network” accounts across social media – illustrating a synergy of terrorism, agitation, subversion, and propaganda functioning as an analogue to Western-backed terrorists and their supporters operating in Syria.

Today, the ruling mullahs’ fear is amplified by the role of the Mujahedin-e Khalq (MEK) and resistance units in leading and continuing the uprisings. Regime analysts say: “The definitive element in relation to the December 2017 riots is the organization of rioters. So-called Units of Rebellion have been created, which have both the ability to increase their forces and the potential to replace leaders on the spot.”

The roadmap for freedom reveals itself in these very uprisings, in ceaseless protests, and in the struggle of the Resistance Units.

Thus, while Iranians mourned in the wake of the Ahvaz terrorist attack, Rajavi was broadcasting her message in New York City gloating of her terrorist organization’s capacity to sow violence and chaos across Iran.

MEK, Al Ahvaziya, and other terrorist groups operating within or along Iran’s borders do so with extensive, admitted US support.

Iran’s most recent accusations that the West and their Persian Gulf allies are behind terrorist organizations attacking Iran are difficult to dispute when US politicians are consorting with literal terrorists in New York calling for an “uprising” as terrorist attacks unfold inside Iran – more so when US policy papers themselves admit their proxies of choice are undeniably terrorists and supporting them must be done either covertly, or after a thorough political whitewash.

A similar process of whitewashing listed terrorist organizations occurred regarding Al Qaeda-affiliate, the Libyan Islamic Fighting Group (LIFG) used by the US and UK to overthrow the Libyan government in 2011, delisted as a foreign terrorist organization by the US State Department in 2015, before members of the terrorist front carried out a suicide bombing in Manchester, UK in 2017 killing 23 (including the bomber).

Spreading Syria’s Chaos to Iran Before the War Ends

The US-engineered proxy war against Syria was always a means toward eventually attacking, dividing, and destroying Iran, before moving onward to Central Asia and southern Russia.

As the Syrian conflict approaches its conclusion, and with that conclusion favoring Damascus and its Russian and Iranian allies, there is renewed impetus in Washington and among America’s allies to spread the war into Iran.

Sanctions, subversion, terrorism, and eventually direct military confrontation are all options either already being exercised, or being prepared to confront and overthrow Tehran’s political order.

By now, even to the most casual observers, it should be clear that it is the West – not Iran – who presents the greatest threat to global peace and stability – sponsoring the very worst terrorist organizations on the planet, carrying out heinous crimes against the populations of Syria, Iraq, and Iran – and as a result of being granted impunity and given endless resources by the West, allowed to menace the Western public as well as amply illustrated during the 2017 Manchester attack. 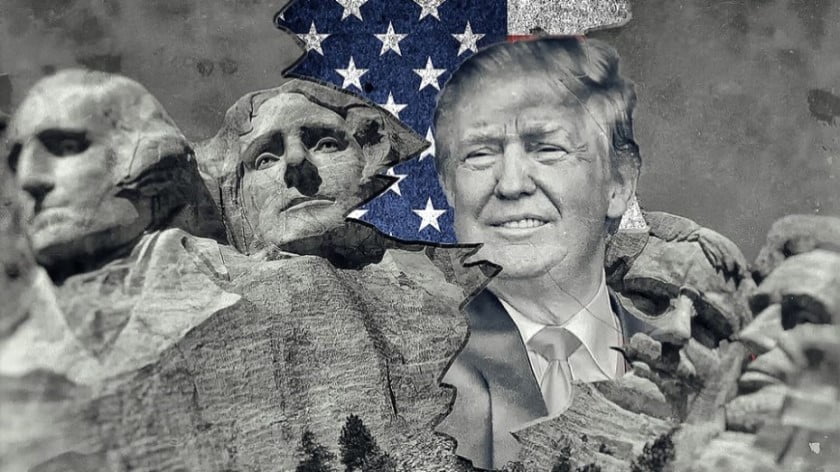 This past Sunday, with great fanfare, Israeli politicians and military leaders finally announced to the Israeli public – and to the country’s enemies – that they had successfully layered the nation’s airspace with the most sophisticated anti-missile defence system ever developed. Long-range Iranian or Syrian missiles, as it is anticipated, would mainly be handled by… 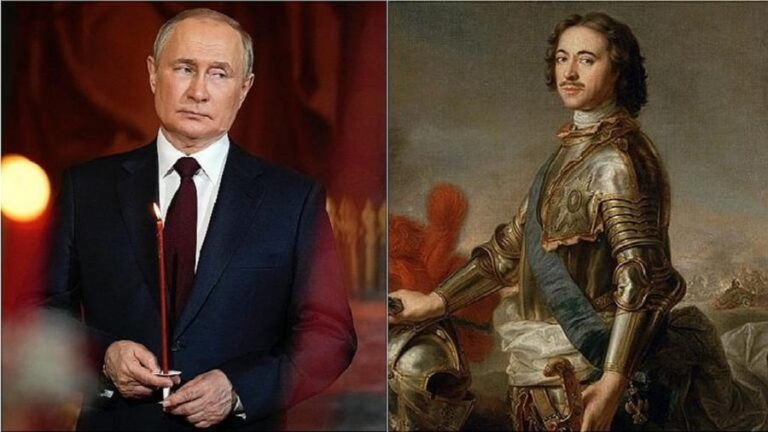 President Putin wasn’t shamelessly admitting to blatant imperialism in the 21st century but making a valid point about the circumstances in which external forces compelled him and his predecessor Peter the Great to militarily act in defense of their co-ethnics and their country’s objective national security interests, both of whom were justified in their ongoing… 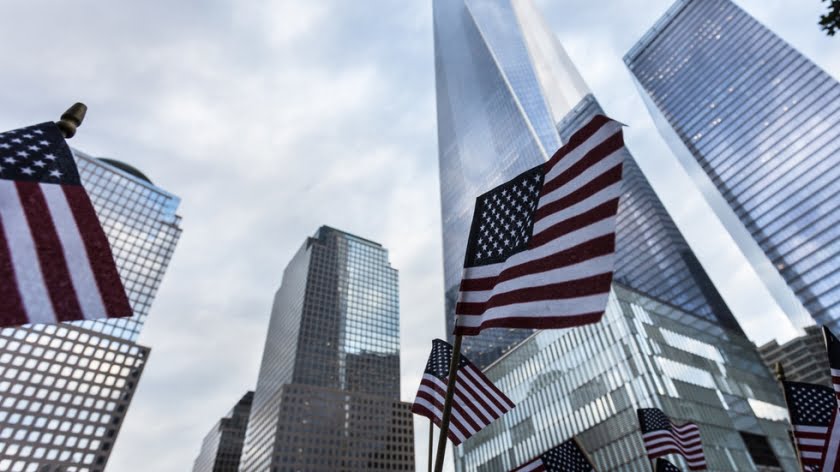 Once upon a time, the raison d’être of US companies was to simply make a buck. Those days are long gone. Today, corporations are in the business of radicalizing the country by taking sides in cultural standoffs. Just in time for the Fourth of July festivities, which this year celebrates the 243rd anniversary of America’s… 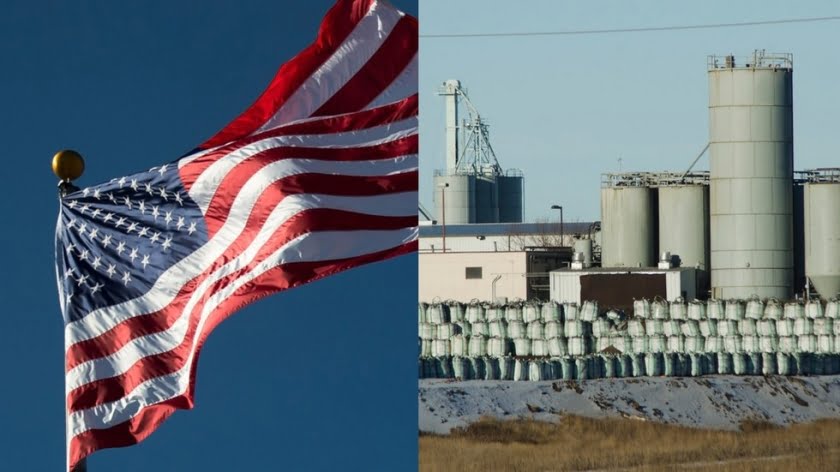