On Friday the Saudi regime admitted that Khashoggi was killed in its consulate in Istanbul. Since then they have changed their story twice:

After weeks of denying involvement in Khashoggi’s disappearance, Saudi Arabia said that he was killed in the Istanbul consulate, saying his death was the result of a “fistfight”. A Saudi source close to the royal palace later told CNN that the Washington Post journalist died in a chokehold. On Sunday, its foreign minister, Adel al-Jubeir, went further, describing Khashoggi’s death on Fox News as a “murder” and a “tremendous mistake.”

Mohammad bin Salman, the Saudi clown prince and effective ruler, does not seem to have any good media advisors. By not sticking to one story all further Saudi accounts will immediately come into doubt.

The Saudis originally claimed that Khashoggi had left the consulate. We now know why they felt safe to make that claim. CNN has a new Turkish story of a decoy which was send out to make it look as if Khashoggi left. They provide pictures to prove it:

One member of the 15-man team suspected in the death of Jamal Khashoggi dressed up in his clothes and was captured on surveillance cameras around Istanbul on the day the journalist was killed, a senior Turkish official has told CNN.

CNN has obtained exclusive law enforcement surveillance footage, part of the Turkish government’s investigation, that appears to show the man leaving the consulate by the back door, wearing Khashoggi’s clothes, a fake beard, and glasses.

While Khashoggi was half bald, the decoy in Khashoggi’s cloth seems to have full hair. 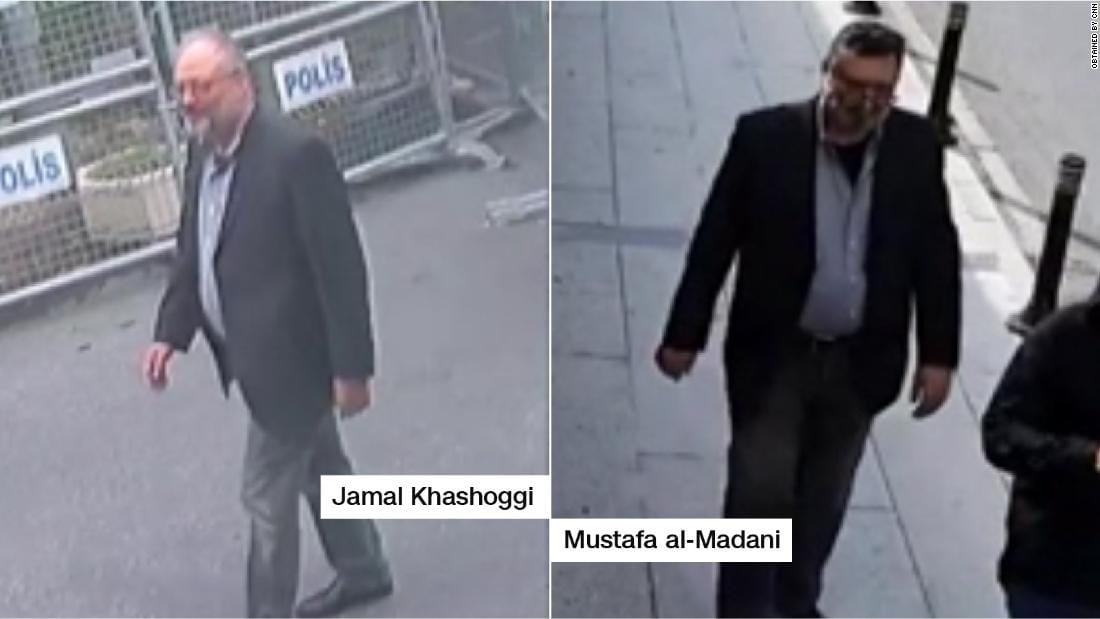 Bit by bit the Turkish government leaks more of the sorry tale. It helps to keep the issue on the political agenda.

YeniSafak, an Erdogan aligned broadsheet, claims (Turkish, machine translation) that Khashoggi was put on the phone with MbS while he was in the consulate. He was allegedly told to return to Saudi Arabia. After he rejected to do so he was killed.

A later YeniSafakreport (Turkish, machine translation) says that Saudi teamleader in the consulate, Maher Abdulaziz Mutreb, made a total of four calls to bin Salman’s office manager Badr bin Mohammed Al Asaker in Riyadh. Al Asaker is the head of the crown prince’s foundation and his ‘invisible hand’. Mutreb allegedly used the cell phone of the consul. Another call was made to the U.S., presumably to Khalid bin Salman, the brother of MbS who is the Saudi ambassador in Washington DC. Khalid has since returned to Riyadh. Al JazeerahArabic had earlier reported of such calls, and of 19 additional WhatsUp calls to MbS himself.

If the news of these calls proves to be true, the killing of Khashoggi was undoubtedly premeditated murder on the direct order of the clown prince.

Turkish police also found an abandoned car that is owned by the Saudi consulate. It can be seen on CCTV footage of the consulate on the day that Khashoggi was killed.

All this proves that the spy-craft of the Saudi assassination team was abysmal. All cellphone networks store records of each call. Any foreign official’s phone in Turkey is under surveillance of the country’s intelligence service. Only some throw-away phone with an anonymous prepaid card could have given some protection.

It seems that the Saudi team simply did not care. It tried to obscure the incident by removing the body, but did otherwise little to hide the operation. They likely expected to get away with this. Their boss, MbS, certainly did:

Why the outrage, Prince Mohammed asked in English.
…
The prince’s confusion soon turned into rage. “He was really shocked that there was such a big reaction to it,” said a person close to the royal court. “He feels betrayed by the West. He said he would look elsewhere and he will never forget how people turned against him before evidence was produced.”

No one seems to care how many Yemeni’s Mohammad bin Salman kills each day. There was no harsh reaction when MbS kidnapped the Lebanese Prime Minister Hariri, nor when he incarcerated nearly 400 princes and tortured them to steal their money. Why would anyone care about Khashoggi?

Because that is how human psychology works:

We humans care way more for a single persons we know, than for a mass of people we have no relations with.

Khashoggi was a personal friend of Erdogan. He was a columnist at the Washington Post, the CIA’s most favored news outlet. Mohammad bin Salman is an enemy of both. Neither the neocon opinion editor of the Post, Fred Hiatt, nor Erdogan have any love for the Saudi clown prince. They would of course raise a ruckus when given such a chance.

They will pile on and air the Saudi’s dirty linen until MbS is gone. Yesterday the New York Timesexposed the twitter brigades the Saudis hired to manipulate the public. Today the Washington Post has a detailed report of Saudi influence peddling through U.S. stink tanks. The Middle East Institute, CSIS and Brookings get called out. Lobbyists for the Saudis are canceling their contracts. More such reports will come out. Years of lobbying and tens of millions of dollars to push pro-Saudi propaganda have now gone to waste.

The affair is damaging to Trump. He built his Middle East policy on his relations with Saudi Arabia. But he can not avoid the issue and has to call out MbS over the killing. His own party is pressing for it. Yesterday the Republican Senator Bob Corker, chairman of the Foreign Relations Committee, dismissed the Saudi version of the story on CNN and called (vid) for consequences:

“It is my sense, I don’t know yet, but based on the intel I have read, based on the other excerpts that I have read, it is my thinking that MbS was involved in this, that he directed this and that this person was purposefully murdered.”
…
There has to be a punishment and a price paid for that.
…
Do I think he did it? Yes, I think he did it. […] We obviously have intercepts from the past that point to involvement at a very high level, so let’s let play this out.

On Sunday Erdogan was on the phone with Trump. The Turkish readout of the call hints at negotiations over Syria, the lifting of sanctions against Turkey and other issues. But the Khashoggi case has now gone too far to allow for a deal to be made over it.

Erdogan’s mouthpiece, the somewhat lunatic columnist Ibrahim Karagül, gives an insight into Erdogan’s thinking and sets out his aims:

The real trap was set against Saudi Arabia. Even though a Saudi Arabia-U.S.-Israel rapport was established and discourse about shielding the Riyadh administration from Iran, the objective was to destroy Saudi Arabia through Salman and Zayed. The next front after the Syria war was the Persian Gulf, Saudi Arabia. They never understood this, they could not understand it. Turkey understood it, but the Arab political mind was blinded.

Now Saudi Arabia is in a very difficult situation. The world collapsed over them. Crown Prince Salman is going through a tough test via Zayed, who has control over him. If the gravity of the situation after the facts revealed with the Khashoggi murder is not comprehended, we will witness a “Saudi Arabia front” in less than a few years.
…
The Riyadh administration must dethrone Crown Prince Mohammed bin Salman at once. It has no other choice. Otherwise, it is going to pay very heavy prices. If they fail to quash the trap set up targeting Saudi Arabia through bin Zayed, they will be victims of Trump’s “You won’t last two weeks” statement, and the process is going to start to work in that direction.
…
This duo must be taken out of the entire region and neutralized. Otherwise they are going to throw the region in fire.

Crown Prince of Abu Dhabi Mohammed bin Zayed is Mohammad bin Salman’s mentor and partner in crime in Yemen. MbZ is smarter than MbS – and will be more difficult to dislodge.

Erdogan announced that he will describe more details of the case on Tuesday in a speech to his party’s parliament group. He will probably not yet play the tape from inside the consulate that Turkish intelligence claims to have. But he may well confirm the revealed phone calls and threaten to release their content.

Erdogan’s aim seems clear. The chance for deal is gone. MbS has to go. He will try to play the case out until that is achieved.

By b
Source: Moon of Alabama
(Visited 28 times, 1 visits today)

Leak by Leak: Erdogan Exerts His Leverage Over the Saudis

Saudis Must Cough Up Billions to Settle Khashoggi Case

2018: The Morning After the Night Before

It's Personal: How Trump Betrayed Both Abbas and Abdullah of Jordan