A military parade in the regional capital of Ahvaz led by the country’s elite Islamic Revolutionary Guard Corps (IGRC) to commemorate the Iran-Iraq War (also known as the First Gulf War) was ambushed by terrorists who ended up killing 25 people and injuring over twice as many, with a lot of the casualties being women and children. Tehran immediately blamed the US, Israel, and the Gulf Monarchies of involvement in this killing spree, and although they all denied any role in it, it didn’t help any that Trump’s lawyer Rudy Giuliani spoke at the so-called “2018 Iranian Uprising Summit” alongside the co-leader of the MEK – which was previously listed as a terrorist organization by the US up until a few years ago – on the same day as the attack and bragged about wanting to carry out regime change against the Islamic Republic.

Nikki Haley immediately clarified that he wasn’t speaking in a professional capacity representative of the US government, though it’s hard to imagine that he wasn’t channeling the highest levels of strategic in the Trump Administration. Presuming that the US does indeed want to overthrow the Iranian government through a combination of sanctions, Color Revolutions, and military defections like Giuliani implied, then last weekend’s terrorist attack undoubtedly attempts to further those plans whether America had a direct hand in carrying it out or not. Khuzestan is a minority-Arab province abutting Iraq which previously experienced a Baghdad-supported terrorist-separatist campaign during the First Gulf War, which is why the recent attack was so symbolic because the so-called “Ahwaz National Resistance” also claimed responsibility for it, too.

Daesh said the same thing but the group is known for pretending to be much stronger and widespread than it is nowadays for public relations purposes, so its claims of responsibility aren’t credible.

Proceeding from the plausible presumption that the terrorists are more likely to be self-declared separatists than Daesh, then it’s probable that this attack was meant to catalyze identity conflict in Iran between the Persian majority mostly inhabiting the center of the country and one of its minority groups in the periphery, thereby following the Law of Hybrid War which states that external provocations could exacerbate preexisting identity fault lines. That doesn’t, however, mean that this attempt will be successful, though it’ll expectedly form part of the foreign infowar on the country designed to craft the international perception that people are “rising up against the regime”, especially coming as it did on the heels of a renewed upsurge in Kurdish terrorism inside of Iran, too.

Targeting Khuzestan was actually in hindsight a somewhat strategic action by the terrorists and their patrons because of the symbolic significance that could be extracted from this attack as it relates to perception management and infowars. A supplementary point is that it may have also been designed to provoke the security services into overreacting against the Arab minority there and thus falling into the typical anti-terrorist trap that afflicts all victimized countries in having to walk the fine line between kinetic and non-kinetic responses to these threats so as not to inadvertently catalyze the same reaction that they’re trying to suppress nor generate legitimate grievances that could then be exploited. Altogether, the recent terrorist attack was part of a devious Hybrid War strategy, but its prospects for success are limited. 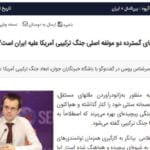 All Along the Watchtower: The Follies of History