The Russian Far East Is the Next Frontier for Multipolarity

Despite being a far-flung and underdeveloped region, the Russian Far East might turn out to be the country’s most promising one if several visionary connectivity proposals are implemented.

Russia has been prioritizing the development of its far-flung and long-neglected Far Eastern region for the past three years now ever since it commenced the now-annual Eastern Economic Forum (EEF) in September 2015, but despite the plethora of deals that were signed during the last four such gatherings, what’s urgently needed is the implementation of four visionary connectivity projects in order to turn this part of the country into the next frontier of the emerging Multipolar World Order. In the order of their prospectively phased implementation, these initiatives are:

* The Tikhi-to-Tiksi Corridor (TTC, via the hub city of Yakutsk);

* and the InterContinental Railway (ICRR).

The above hyperlinks provide more information about what each megaproject entails, but for simplicity’s sake, here’s a rough approximation of how they’d all look if ever successfully completed: 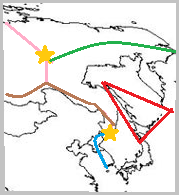 The TSR already exists, and a rail link between Yakutsk, Tynda, and Skovorodino forms part of the TTC, but the rest of this ambitious connectivity vision still has to be constructed. It’s hampered, however, by three geopolitical impediments that affect the following projects:

Another obvious obstacle is the capital needed to fund everything, though that could potentially be unleashed after the peaceful resolution of the three aforementioned issues. All the related parties have an enduring strategic interest in strengthening their complex interdependency with one another in order to reap the mutually beneficial dividends associated with multilateral integration projects, reduced transportation costs, and quicker shipment times brought about by these overland shortcuts.

Although the Northern Sea Route will undoubtedly become an important transit route in the future, it’s nowhere near as time-efficient as if exports were made across the highlighted rail routes. The grand strategic vision is to use these connectivity corridors as avenues for comprehensively expanding each partner’s relations with one another, with the final goal being the creation of a new large-scale integrational platform between them that could be relied upon to stabilize the region and bring wealth to its people through the improved access to previously untapped natural resources that it’ll provide.

For this far-reaching series of ideas to become a reality, however, the three previously mentioned impediments must be resolved. NISEC is in and of itself both a sub-regional integrational platform and a proposal for solving the long-running dilemma that’s thus far prevented Russia and Japan from signing a World War II peace treaty. As for the KC, the US is working very hard to denuclearize North Korea and promised its leadership plenty of American investments if this process is ultimately completed, which could in turn make a South Korean-Russian rail route feasible. Regarding Russian-American relations, these might be improved through a so-called “New Détente”.

So long as the political will is there, then the capital can be found, though Russia could greatly facilitate this by requesting to join the joint Indo-Japanese “Asia-Africa Growth Corridor” (AAGC) as its third strategic partner following the conclusion of a peace treaty with Tokyo. Furthermore, North Korea’s successful denuclearization and America’s promised investments to it afterward could conceivably see both of them and South Korea joining in the AAGC too, with all parties pooling their resources to participate in the Russian Far East’s integrational development as the crucial link connecting each of them. Russian-American relations would have to remarkably improve, but this isn’t impossible.

Even in the event that they don’t, however, then Russia, Japan, the Koreas, and India could cooperate in developing the Far East together without the US’ participation. These leading Asian economies might also having an interest in funding the remaining portion of the TTC in order to offset any speculative future disruptions across the Bering Strait if they forecast that Russian-American tensions will continue to endure across the decades. This overland shortcut to the Arctic might be expensive but it would more than pay for its cost through the investor states’ access to the region’s untapped mineral and energy resources, as well as their reliable access to the Arctic Ocean.

Altogether, the ambitious grand strategic vision put forth in this policy proposal aims to transform the Russian Far East from the country’s domestic backwater to its international showcase, and in the process make it the next frontier for multipolarity. The solely economic nature of this series of initiatives makes it so that they holistically complement China’s own One Belt One Road (OBOR) global vision of New Silk Road connectivity and thus enable Russia to “balance” between it and the AAGC, which can bring about enormous economic benefits if it can encourage them to engage in an intense “friendly competition” over developing the Far East.

This policy proposal was inspired by the insight obtained through the author’s participation in a Duma round table discussion about the integrational prospects of the Russian Far East that was held on 27 September, 2018.

Greater Eurasia Coming Together in the Russian Far East

Could South Korea Join Pakistan and Turkey as an Ex-US “Ally”?

Debunking the Flagwaving Myths About an Attack on North Korea

Korean Crisis: Turn for the Worse