Libya, Seven Years On: A Shame for the West

The FUKUS Axis France-UK-US turned the country with the highest Human Development Index in Africa into a failed state. Accountability? Are you joking?

After Messrs. Obama, Cameron and Sarkozy committed a spectacular mission creep violating the terms of the UN Charter and the UNSC Resolutions 1970 and 1973 (2011), I wrote this indictment along with some colleagues. 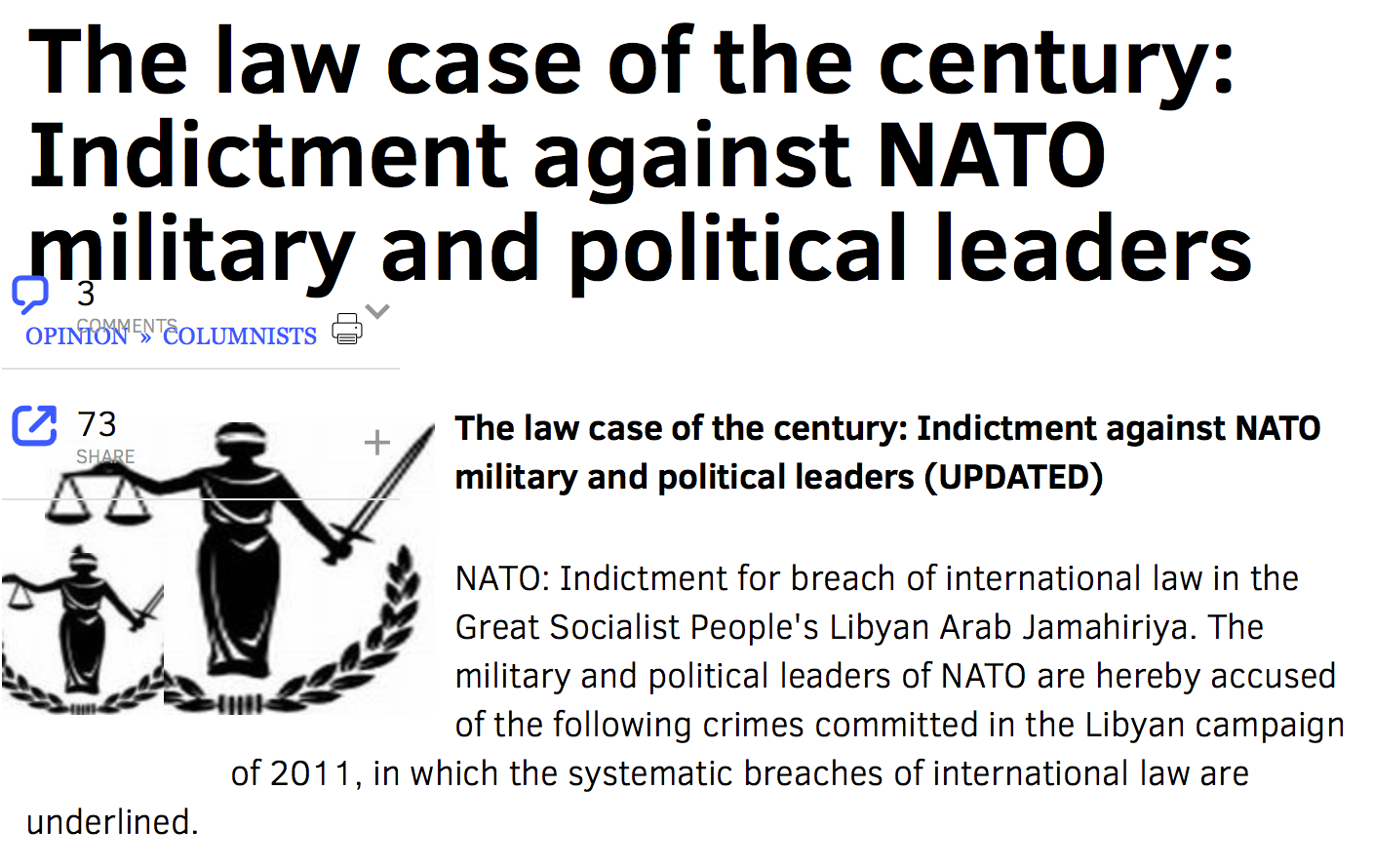 Needless to say, the European Court of Human Rights did not accept it and the ICC at The Hague likewise. But how can a handful of war criminals invade a country, committing the acts named in the indictment among many others, and walk around today as if nothing had happened?

To put things into context, let us study a few figures about Libya in 2010 (the year before the unrest spurred on by the West in which terrorists were armed and abetted, terrorists on the FUKUS Axis own lists of proscribed groups, to destabilize the country).

In 2010, under Muammar al-Qadafi, homelessness was at zero percent. Homes were guaranteed and free. Electricity was free. Bank loans carried a zero per cent interest rate. Farmers were given land, a house, seeds and equipment for free to set up farms in the interior of the country, where the Great Man-Made River irrigated the Sahara. NATO bombed the water supply network, bombed the tubes factory so it could not be repaired then bombed the electricity grid “to break their backs”.

Newly married couples received 50,000 USD, education was free, medical care was free. Higher education was free and students who wished to study abroad received 2,300 USD per month and a car allowance. Libyans who needed healthcare abroad travelled for free and their treatment was paid by the State.

Unemployed graduates received the average salary for the profession they wished to practice until they found a job. The State paid 50% of the price of a car. Mothers were paid 5,000 USD upon the birth of a child. To put this into context, a one could buy three loaves of bread with one US cent. Before al-Qadafi, 75% of Libyans could not read or write. Today the literacy rate is 100% among youths and 87% nationally. The external debt of Libya was zero and it had reserves of 150 billion USD. The FUKUS Axis stole this and today the country’s reserves remain frozen.

As said above, Libya had the highest Human Development Index in Africa and Muammar al-Qadafi was to receive a prize from the United Nations Organization for his development work. His crime? To be planning to drop the US Dollar for transactions and replace it with an African currency, which would have deprived the Western bankers of billions of dollars. His e-learning projects and telemedicine networks set up in Africa were already depriving western telecoms giants many millions in lost revenue.

Today, power and the executive capacity in Libya is divided between the Tobruk-based Government and the National Libyan Army supported by Al-Qadafi loyalists, the Popular Front for the Liberation of Libya and the Warshefana militias; the Government of National Accord supported by the Misrata Brigares, the Zintan Brigades, the Amazigh Militias, the Toubou Militias, the Tuareg Militias, the Tripoli Brigade, and the Presidential Guard, among others; the National Salvation Government, supported by the Shura Council of Benghazi Revolutionaries, al-Qaeda in the Islamic Maghreb, the Shura Council of Mujahideen in Derna, Ansar al-Sharia in Derna, the Abu Salim Martyrs; Islamic State (ISIL), divided into Wilayat Barqa, Wilayat Tripolitania and Wilayat Fezzan and supported by AQIM.

What a mess? Thank France, the UK and USA for that, thank Obama, Clinton, Cameron and Sarkozy and those mentioned in the indictment. All of them are walking around Scot-free as if nothing had happened. And what is the international community going to do about it?

Right, nothing. Welcome to Planet Earth 2018 but do NOT tell me that international law exists or that the West respects any form of the law.

US Walks Away From Another Treaty, Closer to Confrontation with Russia

What Kind of Secretary of State Might Antony Blinken Be?

US, Israel and Saudi Arabia Meet Amid Mounting War Threats Against Iran

Will the Technocratic Coup Succeed?

Pompeo Spells Out the New Normal: All Criticism of Israel Is 'Antisemitic'

Middle East is on the Scales of US Politics
Opinion
FranceLibyaUKUS