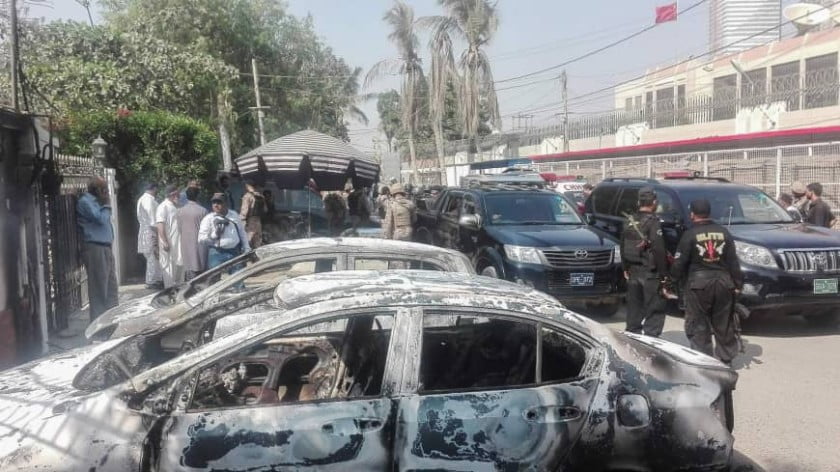 The Baloch separatist mastermind behind the recent terrorist attack against the Chinese consulate in Pakistan’s largest city of Karachi has been assassinated by a suicide bomber in Afghanistan after he was reportedly sent there by India in an effort to distance New Delhi from its proxy after that audacious incident, raising serious questions about whether the South Asian state’s RAW intelligence agency had him killed in a false flag attack because he “knew too much” or Modi blundered by sending him to his death at the hands of others without realizing it.

Terrorist-on-terrorist violence carried out in “Global South” countries usually doesn’t cause headline news anywhere in the world, but what just happened in Afghanistan yesterday got everyone talking in South Asia because of the profound implications that it’s bound to have. Aslam Achu, the mastermind behind last month’s terrorist attack against the Chinese consulate in Pakistan’s largest city of Karachi (the chaotic dynamics of which soon thereafter spilled over the border two weeks later by contributing to the terrorist attack in Iran’s Chabahar port), was assassinated by a suicide bomber in Afghanistan’s southern city of Kandahar after he was reportedly sent there by India earlier this month in a desperate bid to distance itself from its terrorist proxy after such back-to-back high-profile incidents from its asset threatened to undermine New Delhi’s delicate relations with China and Iran.

Throwing Used Tissues In The Trash

Dr. Jumma Marri Khan, the founder of the Overseas Pakistani Baloch Unity (OPBU) organization that works towards reintegrating wayward Baloch abroad back into the Pakistani mainstream, warned his ethnic compatriots just a few weeks ago against being used as “tissue paper” by India in what can be seen in hindsight as a prescient prediction about the fate that would ultimately befall Achu in Afghanistan. In fact, the assassination of this terrorist leader at the hands of other terrorists sends a very disturbing message about what might await all of India’s intelligence assets – whether Baloch or others – in the event that they too become too much of a liability to the country’s Research & Analysis Wing (RAW), which could have the unintended effect of deterring others from wanting to collaborate with it in the future.

It’s been almost two and a half years since Indian Prime Minister Modi infamously brought up the Baloch in his August 2016 Independence Day speech and confirmed what Pakistan had been saying for years about RAW’s patronage of separatist-terrorist groups on its territory, especially seeing as how the country captured HybridWar operative Kalbushan Jadhav earlier that year who eventually confessed to working on behalf of the neighboring country’s intelligence agency to carry out attacks in Balochistan. This needless bragging put RAW and its Baloch assets in an awkward position because both had hitherto vehemently denied any association with one another but then all of a sudden Modi spilled India’s secret to the whole world on live TV because he got carried away thumping his “56-inch chest”.

Rumblings Of Dissent Within RAW?

Now that the cat was out of the bag, India temporarily went full-throttle with its open support for the Baloch separatist cause, doing everything from broadcasting incendiary radio programs into the Pakistani region to taking up the issue at the UN. This, however, evidently caused serious divisions within RAW over the wisdom of advertising its association with those forces in the event that they (expectedly) got out of control and became a serious liability for New Delhi. That’s why schizophrenic behavior soon followed such as India signaling that it would grant citizenship to some separatist leaders around that time but failing to fulfill their request to this day, as well as announcing their participation at a recent “human rights” conference only to postpone it at the last minute.

Whether Achu was ordered by his RAW handlers to carry out the Karachi attack or “went rogue” and did it on his own volition to impress Modi, the international consequences of his terrorist actions made him much too big of a liability for India to continue associating with and resulted in him being sent to Afghanistan as New Delhi struggled to deal with the diplomatic fallout of what he did. Seeing as how the war-torn country is one of the most dangerous places on this planet, he was either transferred there by RAW to be killed after a false flag attack for “knowing too much” or was sloppily dispatched there by Modi despite the fact that the premier should have known that he’d probably be killed at the hands of other terrorists soon enough.

Whatever the reason may be behind why Achu was sent to his ultimate death in Afghanistan, that doesn’t change the fact that RAW’s current and future assets can never trust it again after they saw for themselves how he was treated like used tissue paper and thrown in the trash just like Dr. Jumma predicted. One way or another, India ended up getting rid of one of its most important intelligence assets in a surprisingly cruel way instead of “quietly retiring” him somewhere safe after he outlived his many years of usefulness, which will inevitably affect its recruiting prospects among possible agents for the foreseeable future since they can’t ever be sure that they won’t follow in his footsteps and meet a similarly dismal fate when their time is done too.

Regardless of whether it’s RAW or Modi himself that’s most responsible for Achu’s dramatic death, the fake news narrative is already circulating that Pakistan is to blame in order to cover up what happened and attempt to control the collateral damage that this incident wrought to the reputation of India’s intelligence services. Former Pakistani Ambassador to the US Hussain Haqqani, the chief figure most directly involved in the 2011 “Memogate” scandal where a faction of the Pakistani state asked the US for assistance against the country’s military (and who has since been living in self-imposed exile in America after being charged with treason), tweeted a provocative message implying that Islamabad was behind Aslu’s suicide bomber assassination but inadvertently revealed the invisible hand of India’s perception managers by pushing forth a narrative that aligns with their interests.

Aftershocks From Balochistan To Congress

Aslu’s assassination is bound reverberate from Balochistan to India’s Congress opposition party. About the first, Dr. Jumma’s OPBU looks even more attractive than ever before to RAW-aligned Baloch separatists abroad after they can no longer rely on their patron to ensure their security, while the consequent ruining of RAW’s reputation could be picked up by Congress following its surprise victory in several recent regional elections in order to become a heated political issue ahead of next year’s general election. The aftershocks of this incident might therefore be even more far-reaching and impactful in the long term than the terrorist attack that Aslu masterminded as part of the Hybrid War on CPEC, unintentionally contributing to Pakistan’s stability and possibly even the democratic ouster of Modi from office (the latter of which might occur with a wink from some RAW factions).