Algeria: The Iceberg That Could Sink Emmanuel Macron

After surviving several assassination attempts by French partisans of Algérie Française , Charles de Gaulle in March 1962 signed a peace agreement ending French sovereignty over Algeria. The war for Algerian independence had been long and vicious, marked by terrorism and torture. Everyone who mattered in French politics believed in 1954 that Algeria was an integral part of France, to be defended at all cost. But by 1962, their view had changed. With cold realism, de Gaulle remarked of the conflict, now in its seventh year, “As for France, it will be necessary for her now to interest herself in something else.”

France did fine after granting independence to Algeria. Algeria less so. The Algerians who had taken the side of France, fought in its army, or served as administrators of the Algerian government fared terribly—many suffered appalling deaths at the hands of the vengeful victors. According to Alistair Horne’s Savage War of Peace , 15,000 were killed in the summer after the March armistice.

An important reason de Gaulle broke with his conservative army supporters and became determined to negotiate Algerian independence was that he thought the French and Algerians were fundamentally different peoples. For him, Algérie Française, the “France of a hundred million” supplemented by Algeria’s population and vast reserves of oil and gas, was total fantasy. His colleague Alain Peyrefitte quoted him as saying privately in 1959 that you could mix Arabs and French together, but like oil and vinegar in a bottle, after a while they would inevitably separate.He worried that an Algérie Française would lead inevitably to his home village of Colombey-les-Deux-Églises being transformed into Colombey-Les-Deux-Mosquées.

Nevertheless, Algeria after independence remained tightly connected to France economically, not least as a principal source of “temporary” factory workers, a migration that began during the Algerian war itself. Even as the need for factory labor diminished, France instituted family reunification provisions to allow workers to marry and bring their wives to France, a provision no subsequent president was able to undo. There are now some three million Algerians in France with French or dual citizenship. France’s relationship with the Algerian government is privileged—every French president makes a state visit to Algeria in his first year of office. Trade is mutually important and Algeria plays a critical role in French African policy, as it borders Mali, Niger, and Libya. Basically everyone paying attention in France, except perhaps for Islamist militants, fears deeply the prospect of destabilization or unrest in Algeria.

Few seem to know the true balance of forces in Algerian politics: there is a powerful state apparatus linked to the army, but no strong political parties. Islamists won the first round of legislative elections in 1991, which provoked the army to stage a coup that set off a brutal civil war. Six years later, a party linked to the army won legislative elections, and in 1999, Bouteflika won the presidency and initiated a form of national reunification through amnesty. It is this Bouteflika, a young vanguard of Algeria’s liberation movement in the 1960s, a conciliatory figure after the civil war of the 1990s, and now the octogenarian figurehead of a regime widely seen as corrupt, who sits atop Algeria’s structure like a cork on a bottle. And no one knows what will happen when the cork is removed.

In France, President Emmanuel Macron’s government last week recalled its ambassador for consultations, and regional specialists are saying, perhaps wishfully, that the Islamists are not nearly as popular as they were in the ’90s. No one quite knows what the relevant analogies are. The Arab Spring, which led eventually to a military dictatorship in Egypt and a savage civil war in Syria, hardly seems promising. Nor does the revolt against Libya’s Moammar Gaddafi, which led, after France supported the rebels, to his death and the breakdown of Libya as a functioning state. The sad fact is that there are few attractive models for governmental succession in Arab world (one might look hopefully to Tunisia, though it’s a tiny country compared to Algeria).

The Franco-Algerian novelist Boualem Sansal captures well the ambiguity many feel. In a recent interview for Le Figaro, he welcomed massive peaceful demonstrations as the lifting of lethargy from a people who deserve better government than they have. He noted that Algeria is a rich country with a large number of educated and talented people. But he asked, “how does one pass to the next stage, of organizing free elections, repairing the damage done by 57 years of dictatorship and corruption, putting the country to back to work, providing a social blueprint. Who is going to lead that? Another Bouteflika produced in a lab of the security services? A committee of public safety? A helpful prophet?”

Sansal added that Islamists are always waiting in the wings, numerous and organized and determined. Algeria, he adds, is a conservative Muslim country.Salafism is a powerful force there, one the government has spent billions trying to counter through the development of a “true” Islam, building countless air conditioned mosques to rival the extremists. The result is that huge patches of the populace devote themselves daily to various forms of exorcism and have scant connection to modernity.

Sansal (and most other commentators) insist that the army’s power won’t fail—it controls the country completely and is determined to resist any Islamist challenge. But he also acknowledges that it never really won the civil war of the 1990s, that the Islamists were never defeated politically.

If Algeria were to collapse into chaos, France would be destabilized as well. The civil war resulted in a huge migration surge; this time it would be larger.Among the migrants would be a large number of Islamists, and illegal immigration would mean the French couldn’t control everyone who would come. And France, at least some quarters, is already an Islamic Republic in embryo.

Macron recognizes that Algeria could become the iceberg that drowns his presidency, easily surpassing his bodyguard scandal (the Benalla affair) and the Gilets Jaunes. His administration seems torn between public displays of political correctness and worries about Islamicization. During the campaign, he made a grand gesture of accusing France of “crimes against humanity” during the colonial period, then walked the statement back. One of his key legislative allies said recently there was no real difference between the Muslim headscarf and a headband worn by Catholic schoolgirls, only to rebuked by a top female cabinet member who observed that “no woman in the world has been stoned for not wearing a headband.”

Official France repeats over and over its support for Algerian self-determination while fearing that Algerians will make a terrible choice, one that deprives France of a valuable strategic partner and unleashes an unmanageable migration wave. The conservative journals are full of admonitions about the need for tough-minded realism while offering few suggestions as to what this might entail. France’s population was 17 times Algeria’s in 1830, the year of colonial conquest. Now it is less than double. De Gaulle was right to say that in liberating Algeria, France would have to find something else to worry about. But 57 years later, it is proving not so easy. 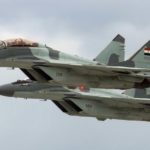 Algeria to Protect its National Interests