We’re at a scary moment internationally as tensions escalate between the nuclear powers of India and Pakistan, and we should all be praying for things to calm down. In addition to the horrible death toll and humanitarian crisis that would follow, according to scientists, a small-scale nuclear war could actually reverse global warming and actually cause devastating global cooling.

To be abundantly clear, what follows isn’t meant as a how-to guide advocating nuclear war as some sort of out-of-the box alternative solution to climate change. It’s meant as a description of the science surrounding how a theoretical regional nuclear war could affect the Earth’s atmosphere, and thus the climate, even for people not directly in the blast radius.

Though they weren’t looking specifically at the current India-Pakistan conflict, in 2011, NASA scientists released a report based on a model that predicted the climate effects of the use of 100 Hiroshima-size bombs in a regional conflict. Though this would not be as intense as full-scale nuclear war between superpowers, such as the threat that existed between the U.S. and USSR during the Cold War, it still would be expected to have a dramatic effect on the climate.

That’s because the bombs would inject up to 5 megatons of black carbon into the upper troposphere, the highest point of the lowest layer of the Earth’s atmosphere. As National Geographic wrote, “In NASA climate models, this carbon then absorbed solar heat and, like a hot-air balloon, quickly lofted even higher, where the soot would take much longer to clear from the sky.”

These carbon clouds were projected to cause temperatures to fall 1 degree Celsius, or 1.8 degrees Fahrenheit, over the first three years, then to as low as 2.25 F before starting to creep back up. Even after 10 years, temperatures would still be expected to be 0.9 F lower than they would have been without the nuclear war.

According to a report from the Intergovernmental Panel on Climate Change, human activity has caused temperatures to rise 1 C, or 1.8 F, above pre-industrial levels, and that figure is expected to rise to 1.5 C, or 2.7 F, as early as 2030 and as late as 2052.

If the NASA model is correct, climate change from a nuclear war could be much more sudden and severe, and it is also predicted to be associated with a decrease in precipitation.

“Agriculture … would likely be disrupted from the combination of cooler temperatures, less precipitation and decreases in solar radiation reaching the surface,” the lead scientist on the study, Luke Oman, said. “This would cause widespread interruptions to growing seasons by producing more frequent frosts.”

The result could be famine in parts of the world.

So, for these among other reasons, let’s hope the situation in India and Pakistan de-escalates, as it has when they’ve come to the brink of war in the past. 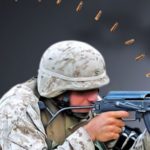