An unnamed Indian official told Sputnik’s New Delhi office that his country’s concerns about the escalating situation in the Gulf stem from its large diaspora there, which interestingly hints that the so-called “Responsibility to Protect” (R2P) doctrine is being used to defend India’s anti-Iranian military deployment to the region.

India’s military deployment to the Gulf is anti-Iranian to the core, but the country won’t openly say so because that would spoil the soft power dividends that it still thinks it can reap from its unconvincing claims of “multi-alignment”, which is why it’s now employing an unexpected euphemism for indirectly defending its new mission there. An unnamed Indian official told Sputnik’s New Delhi office that “India is concerned about the situation because of the large diaspora (living in the region)”, which interestingly hints that it’s invoking the so-called “Responsibility to Protect” doctrine (R2P) as the grounds for justifying this operation. There’s nothing wrong with countries seeking to ensure the security of their compatriots — after all, that’s what Russia did in Georgia in 2008 and the reason why it agreed to reunify with Crimea following the democratic referendum there back in 2014 — but in this instance there’s a strong implication that India believes Iran is responsible for regional destabilization.

After all, it’s not dispatching its naval and air assets to deter the Gulf Kingdoms from mistreating Indian migrant workers in their countries, but to send a strong message to Iran that India won’t take too kindly to any attacks — be they proactive or reactive — that endanger the lives of its countrymen. It doesn’t matter that Iran has no interest whatsoever in attacking Indian citizens in those countries, but just that those civilians could be collateral damage in the event that a hot war breaks out between it and the India’s GCC allies. The unnamed official who spoke to Sputnik also said that “India wants the situation to de-escalate and will urge Iran and the US to take steps towards diffusing tensions’, which hints that New Delhi doesn’t think that Tehran is entirely innocent because it feels compelled to “urge” it to behave responsibly. One might attribute this to standard diplomatic talk but his words take on a new significance given the current context.

India submitted to the pressure of its new American military-strategic ally and discontinued purchasing Iranian oil last month after the US lifted its sanctions waiver on these transactions despite previously promising to only obey the UNSC in this respect, with Gulf resources now replacing Iranian ones. Should a conflict occur, India’s energy security would be jeopardized, which is why New Delhi has an interest in pressuring Tehran to back down and stop defending its interests in response to Washington’s provocations. Its recent military deployment to the region is intended to convey this message, but once again, India can’t say so openly because it’s still trying to keep up the front of “multi-alignment”. Therefore, it’s resorting to claims about protecting its compatriots in order to avoid having to admit that its latest mission is anti-Iranian to the core, but even that excuse exposes India’s concerns that an Iranian (counter-)attack might end up killing its citizens there. 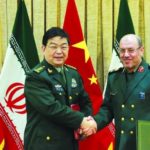 Strategic Transformation and Global Ramifications of the Sino-Iranian Alliance

Railway Politics: India Gets Lost Along the New Silk Roads