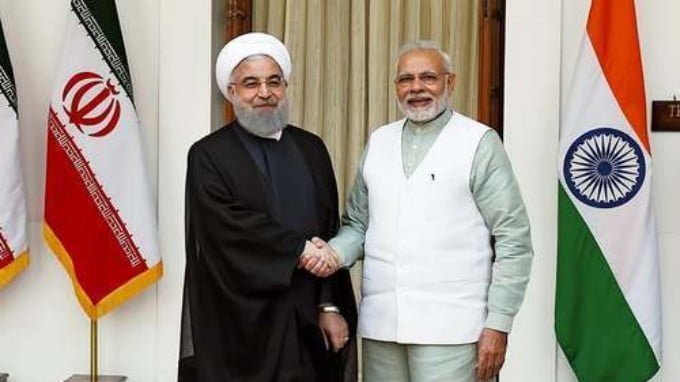 The ground is quickly shifting in Asia and India is quickly finding itself in a difficult position.

For years India has dithered and played games over central Asian development. Since the rise of Narendra Modi as India’s leader, he has played the game of courting both the West and the East to wheedle India a better position.

Modi shifted India back towards a pro-West position immediately after taking over. He’s famously dragged his feet on major infrastructure projects in Central Asia, continuing India’s dreams of outmaneuvering China to become the central power of the Heartland.

So, color me not shocked to see just days after the $400+ billion mega-deal between China and Iran is announced to be close to completion, Iran gives India the boot over delays involving an important infrastructure project.

Four years after India and Iran signed an agreement to construct a rail line from Chabahar port to Zahedan, along the border with Afghanistan, the Iranian government has decided to proceed with the construction on its own, citing delays from the Indian side in funding and starting the project.

India has played footsie with Iran for two years now over major projects like this rail line since President Trump unilaterally pulled out of the JCPOA and began his maximum pressure campaign on Iran.

This all comes down to Modi who has pulled India away from Iran as the pressure ramps up versus being one of the few countries willing to flout U.S. sanctions back in 2012/3 when President Obama put them on the first time.

Back then India and Iran traded oil for goods and/or local currency. India is still a major energy importer and they’ve purposefully strained relations with their energy-rich neighbor.

Go back to November 2017 when Gazprom announced preliminary work on a new version of the long-delayed IPI Pipeline — Iran, Pakistan, India. Since that announcement very little work has been done.

The IPI pipeline, like other major Russian pipelines, like South Stream, Nordstream 2 and Turkstream, has long been fought aggressively by the U.S. going back 20 years.

We’ve pushed for the TAPI Pipeline to come down from Turkmenistan and through Afghanistan to Pakistan and India. And, indeed, the Turkmen national gas company has laid the first 200 miles of the project to the Afghan border but it cannot secure the funding to go further.

Urged on by the U.S. to begin the project, which was supposed to be finished this year, Turkmenistan is now stuck with an unfinished, uneconomical boondoggle since the U.S. could never deliver on its promises to control the ground needed in Afghanistan nor cut a deal with the Taliban to ensure its passage.

The whole thing is a mess while the IPI pipeline remains stalled, exactly as Washington wants it.

So now, with China moving in to secure Iran’s future, cementing their strategic partnership with both Iran and Russia, it’s clear Iran has run out of patience with Modi’s games.

India, especially under Modi, has resisted China’s One Belt, One Road program, being one of the few nations to not send a head of state to the first OBOR summit in 2018. Even the U.S. sent an undersecretary, 3rd class to monitor things.

But this is par for the course with India. They feel entitled to be the major hub in any future trade routes and that entitlement is fueled by U.S. promises of future rewards.

Before their opposition to OBOR, which makes sense given the strained relations between India and China, India was opposed to being a strong partner in the North South Transport Corridor (NSTC) which connects St. Petersburg as well as points east in Russia, with a termination point at the Iranian port at Bandar Abbas as well at Chabahar.

From there goods could traverse the Arabian Sea to Mumbai. The point of the NTSC is to create an overland route which drastically cuts down the time to bring goods from Russia to and from Southern Asia and the Pacific Rim.

It is an important part of OBOR making Iran, not India the key geographical component to Eurasian connectivity and economic development.

This railway from Chabahar to Zahedan was, in part, a concession to India as a spur off the NTSC to open up Afghanistan and satisfy its need to retain some semblance of control over the big picture.

India and Iran have a relationship over Chabahar itself, upgrading its capacity. This was a major breakthrough for the Asian powers which India has now, effectively, thrown away because Trump told them to.

Because it should be clear by now that despite still buying Russian military hardware, Modi chose Trump over its neighbors to the west and east. His aggression in Kashmir last year along with slow-walking this rail line, he’s been holding up central Asian integration for years, including his disastrous opening salvo in the globalist’s war on cash.

Modi has been a good little foot soldier for the West.

Sure he kicks every once in a while, but ultimately, he does what the U.S. wants him to do.

The problem for him and India is now that Trump has raised the stakes on China as well as Europe in the hopes of keeping the petrodollar system afloat, he’s also trying to pull the U.S. out of region physically, leaving only the financial weapons behind.

Trump wants out of Afghanistan. The U.S. will be forced out of Iraq and Syria. Iran will weather whatever Israel throws at them. Trump has already proven that he’s willing to fund proxies like the Saudis and the Kurds but he’s not willing to involve the U.S. in an actual shooting war.

And because of this India’s foreign policy will eventually have to reconcile with its neighbors rather than its bigger dreams of replacing China as the rising power in Asia.

Simply put, look at the Heartland now. Western influence is collapsing. Not only does Trump want out of Afghanistan but Pakistan isn’t coming back into the Saudi/U.S. orbit any time soon.

China just splashed another $11 billion into Pakistan while its huge deal with Iran all but cuts the Saudis out of future oil exports to China. And if the Saudis do want to do business with China it will be on China’s terms.

And those terms will be settled in yuan, not dollars.

This is why I said last week that Trump has reaped the whirlwind in his dubious foreign policy towards the Middle East and Asia.

In article after article I patiently explained how and why Trump and the U.S. had no real leverage over Iran short of bombing the country back to the stone age. That would never happen on Trump’s watch because Iran’s leadership would never do anything so overt as to invite that response.

Even the attack on the U.S. bases in Iraq in January in response to Trump’s miscalculated assassination of General Qassem Soleimani was measured, precise and, officially, without U.S. casualties. If there was ever a moment for the Iranians to make a strategic mistake that invited Trump’s wrath, it was that.

And once his bluff was called there, that was the end of Energy Dominance and the entire strategy of isolating Iran.

Modi to me looks like another Erdogan, a political cockroach who thinks geography gives him more leverage than it actually does. He keeps overplaying his hand and now Iran has chopped it off for being an unreliable partner.

The railway to Afghanistan gets built with Chinese money through the AIIB — Asia Infrastructure Investment Bank. AIIB was developed to be a competitor to the U.S.-led Asian Development Bank (ADB) and it just got a major scalp.

China and Russia will have access to not only the ports at Bandar Abbas and Chabahar but also Gwadar near the Iran/Pakistan border in Balochistan, which China has turned into a focal point for OBOR.

By the time Modi is done playing his games India will have lost a lot of ground. Maybe that’s why despite violent clashes along the disputed border with China, peace quickly ensued.

Because India can’t afford to push China away given the size of their trade relations. I’m sure Trump is telling Modi the U.S. will substitute in goods from the U.S. but that’s going to be a hard sell with China now a major partner with its neighbor to the north and west.

The new silk roads are coming. India to me looks lost.

At least 58 people were killed in a horrific gas attack in the Idlib Governorate this morning. However, even before investigations could be conducted and for evidence to emerge, Federica Mogherini, the Italian politician High Representative of the European Union (EU) for Foreign Affairs and Security Policy, condemned the Syrian government stating that the “Assad regime bears… 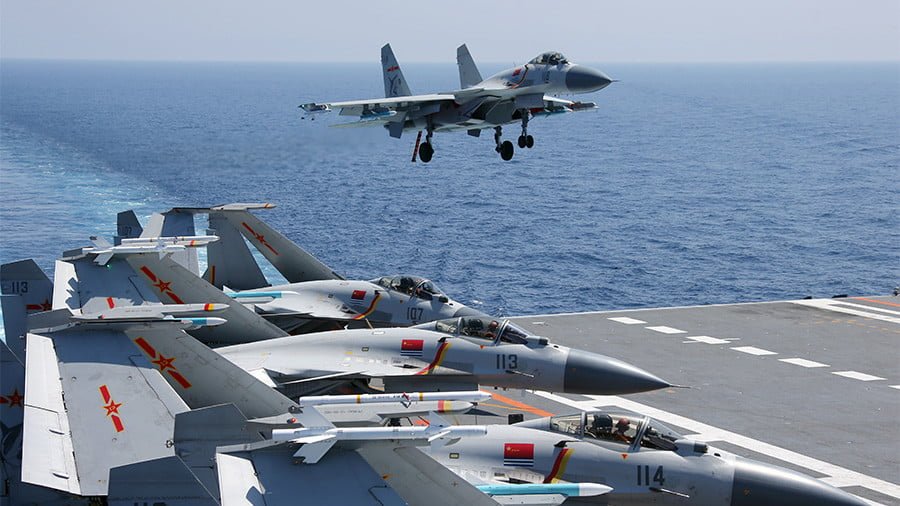 Israel conducted airstrikes in Gaza for a second straight day after shells reportedly launched from the area landed in its territory. The IDF blamed Iran for the attack, claiming it supplied the unknown attackers with weapons. The Israeli military said its warplanes targeted a Hamas position in southern Gaza late Saturday in response for the…

Azerbaijan’s recently strengthened relations with Iran and Pakistan following their governments’ full support of Baku’s territorial integrity in line with four UNSC Resolutions on the matter could greatly benefit Russian interests if Moscow takes this opportunity to breathe fresh life into its stalled North-South Transport Corridor and connect it to W-CPEC+. Reviving The NSTC The… 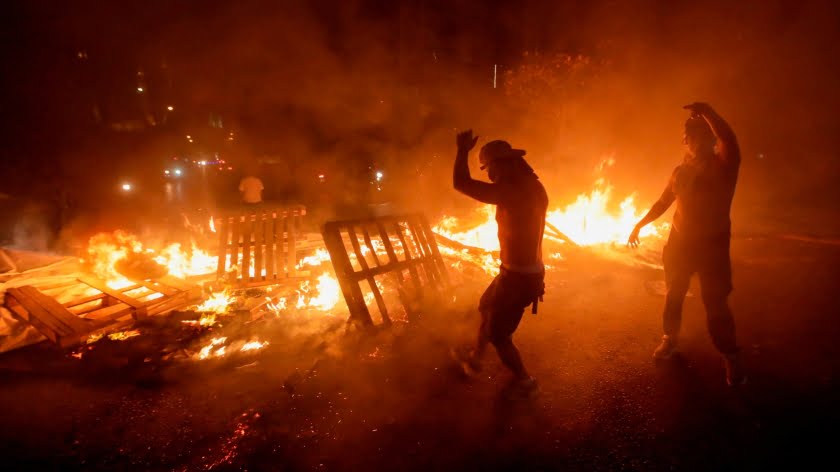 I thought the days when I kicked burning tyres off roads had ended. I used to clear the road in Belfast in 1972. Then, often, I did the same in Beirut. But there I was yesterday, as my faithful driver Selim waited patiently for me to shake hands with the local militiaman and explain why…