For the life of me, I just don’t get the mainstream media’s vehement objections to President Trump’s desire to investigate whether Joe Biden ending up winning the election through fraud. Their argument, repeated from the very moment that Biden was declared the winner and ever since, is that Trump’s claims of fraud are “false” and “baseless.”

But secrecy is normally at the core of fraud. While there might be isolated cases where, say, a person is caught voting twice, it’s rare that massive fraud manifests itself immediately.  It usually takes an investigation to ferret it out.

Let’s assume, for example, that there was election software that corrupt officials were able to use to manufacture whatever number of votes Biden needed to win. How could anyone be expected to ferret out that fraud immediately after the election? One would need an investigation to discover fraud on that sophisticated level. But the mainstream media’s argument is that there should be no investigation because there is no immediate evidence of the fraud. Thus, if the mainstream media’s argument is accepted, the fraud succeeds because there is never an investigation into the matter.

The mainstream media asserts that there is nothing unusual about the massive number of votes that poured in for Biden after the election. But the fact is that it was unusual. Nothing like that has ever happened in U.S. presidential election history.

Democrat Lyndon Johnson’s 1948 U.S. Senate campaign in Texas, which I wrote about the day before the Trump-Biden election, is instructive. Johnson won that election by 87 votes out of almost a million votes cast.

Johnson’s position was the same as that of the mainstream media today. Immediately after the election, he was asserting that there was no evidence of fraud. But as I indicated above, oftentimes election fraud is hard to ferret it. It takes an investigation to do so.

Even with an investigation, Johnson’s opponent, Gov. Coke Stevenson, was unable to prevail in his election contest. Does that mean there was no fraud? No, it doesn’t. In fact, many years later, after Johnson had served as John Kennedy’s vice president and then as president, his electoral fraud rose to the surface.

It turned out that Johnson had told a South Texas crony named George Parr to keep his poll tabulations open after the election, just in case Johnson needed more votes to win. Several days after the election, when Johnson was losing, Parr delivered 200 votes to him, which gave Johnson the win.

This New York Times article, which is worth reading, details Johnson’s election fraud, which became known as the “Box 13” scandal (Google “Box 13 scandal.”) In 1977, after Johnson and Parr were dead, an election judge in charge of Jim Well County’s Box 13, Luis Salas, came forward and confessed that he was part of the fraud. He said that Johnson told Parr that he needed 200 more votes to win the election. Parr instructed Salas to produce the additional 200 votes, which Salas did. The last 200 signatures on the election tally were all in the same ink, which was different from the ink of the other signatures, the signatures were in the same handwriting, and the names were in alphabetical order.

Johnson went on to become U.S. Senator. If he had lost the race, there is no chance he would have become president in November 1963.

It’s certainly possible that Joe Biden’s election is legitimate. But it’s also possible that it’s not. What’s wrong with Trump investigating it now rather than have the fraud surface 30 years from now, as it did in the case of Lyndon Johnson? Surely, the mainstream media wouldn’t want another illegitimate Democrat president, would it?

Biden will Fail to Bring Back 'Normal' Politics. What’s Needed Now Is a Populism of the Left

When Does a 'Glitch' Become a Coup? It’s Time to Regulate America’s Fly-by-Night Voting Machine Monopoly

Who Owns the Future? Dems or GOP?

Biden's America Would Be a Dystopian Hellhole 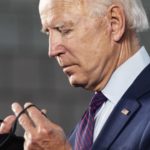