The War on Terrorism Just Keeps Making It Worse

European political leaders are making the same mistake in reacting to the massacre at the Christmas fair in Berlin, in which 12 died, as they did during previous terrorist attacks in Paris and Brussels. There is an over-concentration on the failings of the security services in not identifying and neutralising the Tunisian petty criminal, Anis Amri, as the threat he turned out to be. There is too little focus on bringing to an end the wars in Syria and Iraq which make this type of atrocity unstoppable.

In the aftermath of the killings the visibility of Amri, who was shot dead in Milan this morning, as a potential threat looks misleadingly obvious, and the culpability of those who did not see this appears more glaring than it really was. The number of possible suspects – suspected before they have done anything – is too great to police them effectively.

No politician or security official wishing to retain their job can tell a frightened and enraged public that it is impossible to defend them. Those in charge become an easy target for critics who opportunistically exploit terrorism to blame government incompetence or demand communal punishment of asylum seekers, immigrants or Muslims. At such times, the media is at its self-righteous worst, whipping up hysteria and portraying horrifying but small-scale incidents as if they were existential threats. This has always been true, but 24/7 news coverage makes it worse as reporters run out of things to say and lose all sense of proportion. As the old American newspaper nostrum has it: “if it bleeds, it leads.”

But in over-reacting, governments and media play into the hands of the terrorists who want to create fear and demonstrate their strength, but whose greatest gains come when they provoke an exaggerated self-destructive response. 9/11 was the most successful terrorist attack in history, not just because it destroyed the Twin Towers but because it lured the Bush administration into invading Afghanistan and Iraq. Subsequently, Guantanamo, Abu Ghraib, rendition, torture and “targeted killings” (otherwise known as assassination campaigns), all justified by 9/11, have acted as recruiting sergeants for al-Qaeda type organisations.

The war on terror has failed more demonstrably than most wars: al-Qaeda numbered in the hundreds in 2001, but today – along with Isis – it has tens of thousands of fighters and supporters spread across dozens of countries.

Political leaders are not blameless, but they tend to be blamed for the wrong thing. Contrary to talk about “lone wolf” terrorism, most people like Amri turn out to have had sympathetic or supportive connections. In his case, US officials say he had communicated with Isis and was in contact with a Salafi preacher. He would have needed little more than inspiration and encouragement, since driving a truck into a crowd of people celebrating Christmas requires no special expertise.

Isis remains crucial to the present wave of terrorist attacks in Europe because it provides ideological motivation and justification and can, as in Paris and Brussels, control and sustain a terrorist cell. So long as there is a well-organised de facto Isis capable of providing these things, terrorism cannot be defeated; there will always be a “breakdown in security” to be exploited.

The continuing existence of such a state is proof of the failure of US and European leadership. It is they who created the original conditions for the rise of Isis by invading Iraq in 2003. They allowed Syria to be torn apart by civil war after 2011 and believed the consequent anarchy could be confined to Iraq and Syria. It was only in 2014 and 2015 – after the creation of Isis, the flood of migrants fleeing to central Europe and the terrorist attacks in France and Belgium – that politicians and officials really took on board the potential danger.

Yet two-and-a-half years after it was first declared, Isis is still in business. Some 2,885 Iraqis were killed in November alone, most of them as a result of fighting between Isis and the Iraqi security forces. Over the last month international focus has been on the fall of east Aleppo and too little attention is given to the fact that Isis has been holding its own in Mosul and has recaptured Palmyra in Syria.

There is a dangerous disconnect in the minds of governments and news organisations between what happens in the war in Iraq and Syria and the long-term consequences this has on the streets of Europe. When the Iraqi armed forces and their Kurdish allies began on 17 October their advance on Mosul, by far the largest urban centre held by any of the Salafi-jihadi groups, it was widely believed that Isis was about to be defeated in its last lair.

It has not happened. The elite units of the Iraqi armed forces, notably the 10,000 strong “Golden Division”, have suffered as much as 50 per cent casualties. They are being ground down by skilful tactics in east Mosul whereby mobile Isis units rapidly shift their positions in built-up areas using holes cut in the walls of houses and a network of tunnels. They avoid permanent fixed positions where they can be located and targeted by artillery and the US-led air coalition. They ambush the Iraqi military forces in their vehicles as they move through narrow streets. The UN says that almost 2,000 members of the Iraqi security forces, including paramilitary Shia units and Kurdish Peshmerga units, were killed in November alone.

The offensive is largely stalled and still has not reached the main part of Mosul city on the west bank of the Tigris River. Districts in east Mosul captured weeks ago have to be captured again. The main thrust of Iraqi government forces attack on Mosul was meant to come from the south, but this front has not moved for six weeks. Isis is even reported to have sent 500 fighters from Mosul across the desert to retake Palmyra, in the first important territorial gain by Isis for 18 months.

This is not an organisation that is going out of business fast, or even at all. The failure of Jabhat al-Nusra, Ahrar al-Sham and other insurgent groups to defend east Aleppo more resolutely and successfully will probably lead to a haemorrhage of the most experienced and toughest fighters to Isis. It will have the advantage of being less dependent than the other rebel groups on outside support from Turkey, Saudi Arabia and Qatar who are close to accepting defeat in Syria. This may not save Isis in the long term because of the sheer number of its enemies, but it has shown once again that it is more resilient than the Pentagon had supposed.

There are serious consequences here for Europe: Isis can keep going for years with the low-level terrorist attacks like that which just happened in Berlin. It does not have to do much by way of exhortation or material aid to achieve this. When a terrorist incident does take place it is capable of shifting the political agenda in a country as large as Germany. Isis knows this and while it exists the terrorism will not stop. 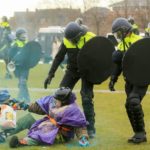 The End of the Netherlands and Germany
Opinion
GermanyIraqSyriaWar on Terror