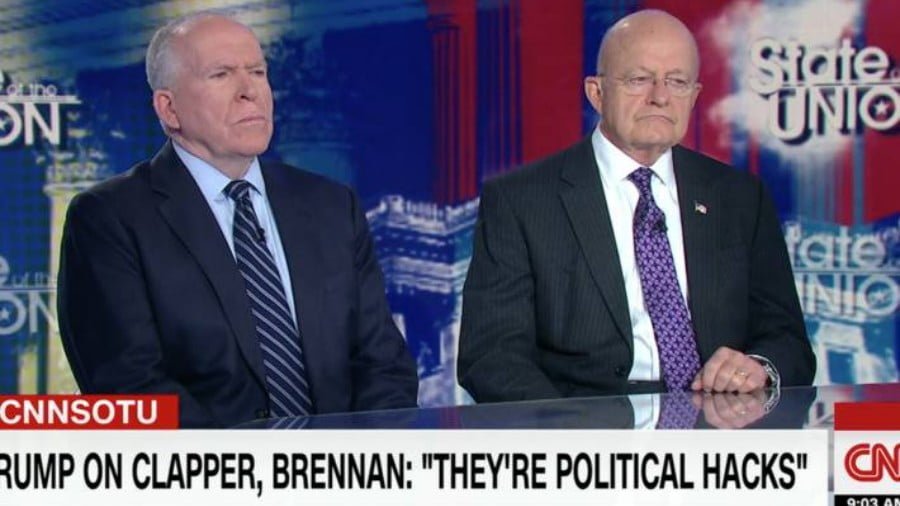 In the old days, America’s top spies would complete their tenures at the CIA or one of the other Washington puzzle palaces and segue to more ordinary pursuits. Some wrote their memoirs. One ran for president. Another died a few months after surrendering his post. But today’s national-security establishment retiree has a different game plan. After so many years of brawling in the shadows, he yearns for a second, lucrative career in the public eye. He takes a crash course in speaking in soundbites, refreshes his wardrobe and signs a TV news contract. Then, several times a week, waits for a network limousine to shuttle him to the broadcast news studios where, after a light dusting of foundation and a spritz of hairspray, he takes a supporting role in the anchors’ nighttime shows.

– Politico: The Spies Who Came in to the TV Studio

May you live in stupid, corrupt and yet fascinating times.

– Me, paraphrasing a Chinese curse

I’ve been away the past couple of weeks taking a break with my family. I paid attention to the news, but from a distance. As usual, there’s plenty to talk about.

In the last 24 hours alone, we’ve seen political chaos erupt in Italy and hordes of pundits simultaneously lose their minds over the murder of a prominent Russian journalist that never happened. Such is the world we live in. Stupid, corrupt, yet fascinating.

Of all the things I could’ve written about, you may be surprised by today’s selection. It’s a clip many of you probably saw where Richard Stengel (who was Time Magazine’s managing editor from 2006-2013) admits he approves of government propagandizing its own citizens during a Council on Foreign Relations forum. Here’s the clip.

At a Council on Foreign Relations forum about "fake news," former Editor at Time Magazine Richard Stengel directly states that he supports the use of propaganda on American citizens – then shuts the session down when challenged about how propaganda is used against the third world pic.twitter.com/ClAT5POv7G

It remains amusing how mainstream journalists continue to blame the public for not believing them, rather than admitting they themselves created this environment of deep distrust by acting as salespeople for the status quo versus challenging the powerful like they’re supposed to.

The fact someone who spent pretty much his entire career in journalism, including a lengthy period at the top of Time magazine, is a public advocate of government propaganda tells you all you need to know about the debased state of the so-called “trustworthy” media in modern America.

Moreover, Mr. Stengel doesn’t just theoretically believe state propaganda’s a good idea, he’s so completely devoted to the concept he took a job with the U.S. State Department which he admits was nicknamed the “chief propagandist job.” If our nation’s esteemed media properties are being run by men and women with this sort of a mindset (they are), what does it say about the overall state of the press today?

Someone who genuinely accepts and performs the role of speaking truth to power would never want to serve as chief propagandist for the government, nor would a government ever want to hire such a person. The fact Mr. Stengel so seamlessly slithers through the revolving door between government and media says so much about how things work today.

Of course, Stengel’s not the only one. David Frum started out in journalism and later transitioned to government to become primary cheerleader for the Iraq war as George W. Bush’s chief speechwriter. Naturally, being so spectacularly wrong about one of the biggest foreign policy disasters in U.S. history didn’t impede the man’s career one bit. He easily transitioned back to media, currently finding himself senior editor of The Atlantic magazine. Failing your way to the top is a very real thing in this country.

But that’s ancient history. One might assume the press’ embarrassing performance in covering and forecasting the 2016 election would’ve led to introspection from the masters of the media universe, but one would be wrong. In fact, NBC recently went ahead and hired ex-CIA head John Brennan as a “senior national security and intelligence analyst,” while CNN scooped up former NSA and CIA chief Michael Hayden in addition to ex-Director of National Intelligence James Clapper. Unfortunately, that’s just the tip of the government-media-complex iceberg.

As was noted in a February article by Jack Shafer published in Politico:

And CNN is still adding to its bench. Last Saturday, former Comey aide Josh Campbell wrote a New York Times op-ed on why he was leaving the FBI on principle. By Monday, the network was announcing his new position as a “law enforcement analyst.”

They don’t even hide this stuff and refer to it by secret spook names like Operation Mockingbird anymore. They do it right in your face.

If anything, the media’s gotten worse since its total failure during the 2016 election and shows no sign of even wanting to improve. Much like the status quo in general, the mass media is fully committed to propagating a culture of stupidity and corruption.

And these are the people who lecture us about fake news.