History of World War II: Did Mussolini’s Fate Prompt Hitler to Kill Himself?

With Allied armies pushing ever northwards through the “tough old gut” of Italy, and German forces pulling out, Benito Mussolini took a long look at the situation before departing Milan on 25 April 1945. It was, fittingly, Italy’s Liberation Day as the despot fled Milan in his red Alfa Romeo, with long-time mistress Clara Petacci in the passenger seat.
A few days before, Petacci, aged 33, had spurned the chance in escaping to safety with her family – as arranged by Mussolini – choosing instead to stay with him while his fascist rule crumbled. Petacci would pay dearly for her attachment to the dictator.
Next day, 26 April 1945, the Alfa Romeo was discarded as Mussolini and Petacci joined an SS-led motorcade, which sought to cross the northern Italian border and reach Switzerland. From neutral Swiss territory, the deposed Duce would travel the 1,000 kilometers or so by aircraft to fascist Spain.
On Spanish soil, Mussolini could be assured of safe haven under the wing of that country’s autocrat, General Francisco Franco. However, by 27 April 1945, the SS convoy concealing Mussolini was travelling through territory controlled entirely by Italian communist partisans. They had erected a number of checkpoints along the route to Switzerland’s border.
The Italian guerrilla forces were allowing German units to advance unharmed, providing they handed over any hidden compatriots of theirs. Petacci had easily been spotted and captured at an earlier halting point, though for now she was unrecognized.
The SS lieutenant, Fritz Birzer, acting as Mussolini’s personal guard from 18 April 1945, implored him to put on a German overcoat and helmet. Mussolini was aware the region was commanded by partisans so reluctantly he heeded Birzer’s advice, while also putting on sunglasses.
Now 30 miles from the Swiss frontier, Mussolini’s SS convoy was stopped at a final checkpoint near the village of Dongo, on Lake Como’s north-western shore.
During this last inspection Urbano Lazzaro, a commissar of the 52nd Garibaldi Partisan Brigade, walked up to the German truck that Mussolini was hiding in. Lazzaro, in his early 20s, had not long before escaped from German captivity before joining the anti-fascist partisans in northern Italy. His eyes zoned in on the 61-year-old Mussolini, hunched over in the truck’s rear, pretending to be asleep. Unfortunately for Mussolini his unusual features, the distinctive square jaw and broad mouth, betrayed itself to Lazzaro who quickly identified him.

Lazzaro later recalled that the Duce “seemed completely lacking in will, spiritually dead” and that his face revealed “utter exhaustion but not fear”. Mussolini was carrying a machine gun and pistol but made no attempt to fire them.
Three months before, in January 1945, Mussolini said,

“Seven years ago, I was an interesting person. Now, I am little more than a corpse… I am finished. My star has fallen. I have no fight left in me. I work and I try, yet know that all is but a farce”.

In his over two decades in power, one of Mussolini’s fatal errors was an inability to recognize the Italian psychological makeup lacked the soldierly virtues required to fight large conflicts – unlike the Germans who had undertaken numerous, significant battles over past generations.
Waging wars can require blind, bloody-minded devotion and the common Italian soldier betrayed a more insubordinate, ill-disciplined nature than his German equivalent. When the fighting turned sour, Mussolini’s men often melted away into the landscape, requiring crucial Nazi support in Greece and Africa during the early 1940s.
Mussolini’s driving ambition had been to emblazon himself upon the world as a new Julius Caesar – the Roman dictator and general who, almost 2,000 years before, became the first leader of Rome to cross both the English channel and the Rhine.
In 1932 Mussolini had said,

“War alone brings up to its highest tension all human energies, and puts the stamp of nobility upon the peoples who have the courage to meet it”.

By the middle of 1933, and now more than a decade in control, Mussolini planned to launch attacks against first Yugoslavia, and then France no less. Any such ventures would likely have been doomed to failure. Italy was further hampered by being a resource-poor country, lacking the raw materials essential in conducting lasting wars. Mussolini only cancelled the invasions after learning that French intelligence had cracked some of his military codes.
Following the Italian troops’ insipid performance during their 1935 invasion of Ethiopia, Mussolini would thereafter have been wise to acknowledge the reality of his situation. Within the under-resourced Ethiopian army some soldiers were equipped merely with swords and spears, others with 19th century military equipment. Yet still the Ethiopians scored successes against their Italian enemy, such as during the Christmas Offensive of December 1935.
Mussolini should have firmly opposed joining the war on Hitler’s side in June 1940, instead offering mere tacit support. Four months later in October 1940 Mussolini’s fascist counterpart, General Franco, withstood Hitler’s overtures to ally Spain behind the Nazi war effort. It was a decision that largely ensured Franco would remain in power for three decades after the war. Mussolini did not quite possess Franco’s cunning, however.
The Cuban leader Fidel Castro, who for over 50 years survived the assaults of an American empire to the north, said that Italy’s dictator,

“declared war, but Mussolini thought he could count on the Roman legions. He’d forgotten that, in the end, the Roman legions were made up of barbarians – and that the Rome of olden days, of the age of Julius Caesar, no longer existed. The Italians were a peaceable people, with another culture, another mindset; they no longer had those militaristic traditions that the Romans always had – whereas the Germans had maintained them – so Italy entered the war and you know what happened: defeat after defeat”.

Now, with the fighting in Europe reaching its end, it was in many ways fitting that Mussolini was captured wearing a German uniform. Over the preceding four years, Hitler and his men had come to the Italians’ rescue repeatedly; during the war’s final 18 months, Mussolini was propped up entirely by German military strength in northern Italy, and was little more than a Nazi instrument as he was too aware. Mussolini’s arrest by Italian guerrillas stood as a further humiliation, but worse was to come.
The following day, 28 April 1945, Mussolini and Petacci were executed by firing squad at 4.10 in the afternoon. Early next morning, their bodies were unloaded from a vehicle in Milan at the town square of Piazzale Loreto – where they were severely despoiled by a growing crowd, then strung up by their heels outside a half-built service station. In August 1944, Mussolini had overseen at this precise spot the death of 15 partisans, yet it was still an ignominious end.
In the early afternoon of 29 April 1945, as Soviet troops were now but one mile from Hitler’s underground headquarters, he heard of Mussolini’s fate by radio. Hitler is claimed to have said, “This will never happen to me!” While news of Mussolini’s ignoble end may have bolstered Hitler’s determination not to be caught, he had already decided to do away with himself, leaving little trace. Hitler felt this would deny any foes the satisfaction of defiling his body, and prevent his remains from being made a spectacle of.
Six days before, on 23 April 1945, Hitler informed the war minister Albert Speer that,

“I shall not fight personally. There is always the danger that I would only be wounded and fall into the hands of the Russians alive. I don’t want my enemies to disgrace my body either. I’ve given orders that I be cremated… Believe me, Speer, it is easy for me to end my life. A brief moment and I’m freed of everything, liberated from this painful existence”.

Hitler had wanted to take his life on 22 April 1945, hours before Speer went to see him in the Führerbunker for the last time. On 22 April, the Soviets appeared set to take Berlin within a couple of days. The SS General Gottlob Berger informed Speer of Hitler’s intention to kill himself that day, as likewise did Eva Braun. Hitler’s mistress, a close confidante of Speer’s, confided to the armaments minister in the bunker that,

“Yesterday [22 April 1945] the situation was so terrible it seemed the Russians would quickly occupy all of Berlin. The Führer was on the point of giving up”.

As Hitler’s subordinates deserted him in growing numbers, he feared the Red Army would simply waltz into the heart of Berlin. Yet it would not be until 30 April 1945, the day Hitler ended his life, that Stalin’s troops finally came within striking distance of the bunker. The Nazis fought bitterly to the death, killing at least 70,000 Soviet soldiers during the Battle of Berlin alone, which finally finished on 2 May 1945.
By early May, Hitler was now little more than a charred corpse – in the early hours of 29 April 1945, he had dictated in his final political testament that,

“I do not want to fall into the hands of enemies”.

A suicidal tendency comprised part of Hitler’s nature, and it is likely he had previously contemplated turning a gun on himself. Following the disastrous Munich Beer Hall Putsch of November 1923, Hitler fled south to the country home of Ernst Hanfstaengl, a businessman and then intimate friend of the Nazi leader. Hitler reached the Hanfstaengl house in a disreputable state, face and clothes covered in mud, while straining with a dislocated shoulder.
The following day the police were closing in on Hanfstaengl’s residence, when Hitler is reported to have said “Now all is lost – no use going on”, before picking up his revolver from a nearby cabinet. Hanfstaengl’s other half, Helen, claims that upon seeing Hitler take the gun she “grasped his arm and took the weapon away from him”, shouting, “What do you think you’re doing?” Hitler is said not to have resisted, as he was fond of Hanfstaengl’s wife, allowing himself to be arrested instead.

The Fall of Mussolini: The Dictator, Who Vainly Believed in Hitler's "Miracle Weapon" 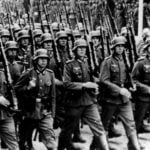