No War Between Iran and the US Any Time Soon: Trump Doesn’t Know How to Negotiate with Iran

War between the US and Iran is not likely in the next two months, regardless of media campaigns, US unilateral sanctions, and the build-up of US military forces in the Middle East. The US sanctions against Iran date back to 1979 and were actually intensified during the Obama era on a much larger scale than the sanctions imposed a year ago by the present US administration. Iran agreed to negotiate a deal with Obama only when he agreed to recognise the right of Iran to undertake nuclear research and develop nuclear capability. US president Donald Trump is merely re-implementing sanctions previously imposed on Iran.

Notwithstanding the drums of war, a costly war is not the aim of either side and the threats, though palpably increasing tensions, are nothing more than threats. The beleaguered president and his neo-conservative team within the present administration seem surprisingly ignorant of how to deal with Iran. They are deliberately trying to create a dangerous situation in the Middle East but will end up emptying their guns, to no avail, into deep empty waters. However, over the next 60 days – the deadline announced by Iranian president Hassan Rouhani for European signatories of the nuclear deal to respect the commitments they made before partially withdrawing from the deal – the level of tension will grow. After the 60 days are over, Trump will have either to deescalate (which is unlikely), impose even more sanctions, allow the Europeans to deal with it, or consider a war option.

The US sanctions against Iran are not international but unilateral. The UN, Europe, Russia, China and Iraq are on Iran’s side even if not all are in a position to persuade Trump to change his mind and lift the sanctions on Iran.

Europe is off-balance due to the importance of its political, commercial and military relationship with the US on one hand, and the desire to honour its signature of the JCPOA agreement. Europe, like Iran, was caught off-guard by the US sanctions and is well aware of articles 26, 36 and 37 which allow Iranian officials to withdraw partially or fully from their commitments.

In Iran, President Rouhani has found a balance domestically between radicals and pragmatists. Many Iranian decision makers, led from behind the scenes by Leader Sayyed Ali Khamenei, believe that Iran should pull out of the nuclear deal (as provided for by the statement of understanding) signed by the international community and Iran.

The radicals never believed in the US commitment and were surprised when the Obama administration signed off on the JCPOA. In fact, Sayyed Ali Khamenei said “If the US fails to honour its commitment, we shall tear it up ourselves”. But he allowed President Rouhani to try and, for a few years, it looked like it was working.

Obama did try to negotiate other deals, but he failed because Sayyed Khamenei was adamant: “Only the nuclear deal is on the negotiating table”. The US administration wanted to discuss Iran’s support for its partners in Lebanon (Hezbollah), Palestine (Hamas and the Islamic Jihad), and various factions in Iraq who hold compatible objectives and ideology, its contestation of US world hegemony and Israel’s refusal of a Palestinian state. Indeed, if Iran were to halt its support to these non-state actors, it would goes against its own constitution and would disarm itself by separating from influential partners who will be much needed if the potential confrontations threatening the Middle East ever materialize.

In fact, the reason why Iran keeps these partners armed and financed is due to its absolute mistrust of US intentions since 1979. This mistrust has only increased since US forces occupied Afghanistan in 2001 and then Iraq in 2003, the war on Hezbollah (Iran’s partner) in Lebanon in 2006, and its (failed) regime change war on Syria. Iran strongly believes the US considers it as next on its “list of targets” – as stated by the US General Wesley Clark – with the goal of creating a “new Middle East”, a narrative presented by Prime Minister Shimon Peres in 1996, repeated by Condoleezza Rice in 2006, and by other US and Israeli officials ever since.

Trump’s ambition is to be re-elected in 2020. If he does declare war on Iran, he would hope to destroy Iran missiles bases in the first wave of attacks and create a situation similar to that in 1988 when Imam Khomeini accepted the peace resolution with Iraq, describing it as “worse than swallowing poison”.

Iran in 1988 did not have the same capabilities as Iran in 2019. Trump may not be able to force Iran to the negotiating table. A war will neither enable him to reach his objectives and destroy all of Iran’s capabilities nor will it stop Iran’s support of its Middle Eastern partners. And that’s apart from the possibility of ballooning prices for oil- and the fact that the US bases surround Iran are also potential targets for Iran’s precision ballistic missiles unless Trump manages to destroy them all in the first wave of attacks. One thing is certain, in the case of war Trump will create a human catastrophe in Iran. The Islamic Republic’s response will be harsh. 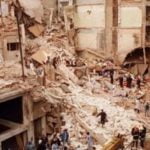 Washington Struggles to Manage the Crisis, But Israel Continues to Benefit
Opinion
IranIsraelUS