Bolsonaro’s Brazil Is a Pretty Bleak Place to Live

It’s been a little over half a year since the right-wing leader took office, but already Bolsonaro has made Brazil a pretty bleak place to live, and it doesn’t look like it’s going to get better anytime soon.

Nobody denies that Bolsonaro inherited a terrible socio-economic situation upon entering office at the beginning of this year, but he hasn’t done much to improve it in the past half year since he’s been in power.

His unexpected rise to the country’s top political post came about as a result of the US’ Hybrid War on Brazil, which aimed to create the conditions that would make the country’s return to leftist leadership impossible while simultaneously turning the South American giant into Washington’s regional “Lead From Behind” proxy through the fast-moving military-strategic, and possibly soon even economic, partnership that’s made rapid progress during this time. Geopolitically speaking, Trump can’t fulfill his “Fortress America” vision of restoring the US’ unrivaled hemispheric dominance without controlling Brazil, hence the importance of keeping Bolsonaro in power, or at least long enough for him to carry out radical reforms that make this state of affairs irreversible.

Brazil is already on the path to becoming a “Major Non-NATO Ally” (MNNA), whether formally so or unofficially in practice, which will turn the rising Great Power into a platform for projecting the US’ military power all throughout the region. This has yet to directly affect the lives of ordinary Brazilians and has therefore gone largely unnoticed by most, but it’s this partnership with the Pentagon that could ensure that Bolsonaro’s neoliberal economic policies become set in stone. The right-wing leader is trying to push through a very controversial pension reform that’s already provoked massive protests and a 45 million-person strike a few weeks ago, but this explosion of grassroots resistance still might not be enough to get the government to reconsider even though the demonstrators have joined forces with anti-government ones who are enraged by The Intercept’s leaked revelations proving that there was indeed a conspiracy to convict former President Lula.

On top of all this, Bolsonaro also wants to slash university funding in order to eliminate what he believes are “communist cells” embedded in this institution but which might very well lead to less opportunities for Brazil’s already underprivileged population if less educational options become available to them in the future. The country’s economy is already stagnating according to the state’s latest official report in this respect, and while one might be inclined to think that the government’s neoliberal policies and promised privatizations might attract more outside investors, that actually hasn’t been the case thus far. The prevailing uncertainty unleashed after the US’ Hybrid War opened up the Pandora’s Box of political unrest naturally scares international businessmen who aren’t sure whether it’s worth the risk to get involved at this point.

The possible clinching of a free trade deal between the Brazilian-led Mercosur and the EU in the near future might restore some macroeconomic hopes to the country, but it might also endanger the US’ plans to reach its own with the South American bloc too, potentially leading to more Hybrid War pressure to derail this development. In addition, Bolsonaro’s Brazil has tried to distance itself a bit from “fellow” BRICS member China on the pretext that its partner is taking advantage of it through lopsided agreements but which many suspect might also be a sign of fealty to the US. Whether Bolsonaro likes it or not, trade ties with China are exceptionally important for Brazil, and this signal of intent (which to his credit he has yet to implement on the scale that he promised during the campaign) has raised further worries about his country’s economic future.

Forgotten amidst all this socio-economic and political fretting is the fact that rainforest deforestation has risen over the past six months since Bolsonaro entered office, probably driven by people who feel emboldened by his plans to axe an environmental panel that protects this global treasure and also allow the mining of a vast reserve of it. The consequences of this trend getting out of control could truly be catastrophic for the entire world, yet there seems to be little interest in stopping it, let alone any practical proposals for doing so. Altogether, it’s not an exaggeration to say that Brazil has become a pretty bleak place to live ever since Bolsonaro took power, and while he veritably inherited a real mess (which was preexisting but exacerbated by the US’ Hybrid War), he hasn’t done anything to fix it and has only made it worse. 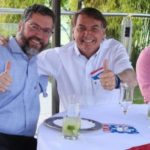