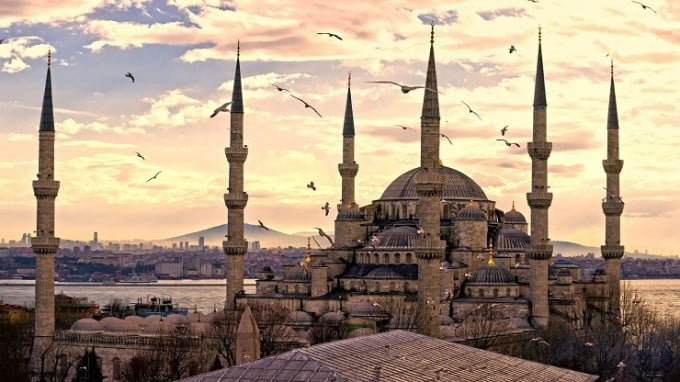 Sultan Abdul Hamid II, in the face of a rising secular nationalism in the late 1800s, that culminated in the Young Turk movement, tried to restore the influence of the Ottoman Empire among Islamic nations and the Empire’s many peoples by stressing the importance of Islam and the Ottoman Caliphate, of the role of the Ottomans as the protectors of Islam and, in the modern world, a bulwark against western colonialism.

Over a hundred years after he left power, after the Empire was broken up by the western powers after the First World War, after the Turkish nationalists under Mustafa Kemal, known as Ataturk, the father of modern Turkey, kicked the British, French, Greeks and Italians out of Anatolia and Constantinople and established Turkey as a secular democratic state in 1923, President Erdogan has adopted the mantle of Abdul Hamid, and his claim to be the defender of Islam, as a means of shoring up his own weakening support in Turkey, and as a means of raising the prestige of Turkey among Islamic nations and the world.

Until last week his pro-Islamic policies have been of concern mainly to Turks, divided between those who support his actions and those who oppose the retreat from the foundation of the secular state by Ataturk, which followed a century of reformist Sultans beginning with Selim III, who reformed the army on Western lines in early part of the 19th century but was overthrown and lost his life at the hands of the the elite unit that formed the backbone of the Sultan’s troops, the Janissaries.

Twenty years later, modern reforms continued under Sultan Mahmud II, who instituted administrative and secular legal reforms to guarantee equal rights and the benefits of western “progress” to the citizens of the Empire, reforms that were rational and progressive for the time, and a charter of reorganisation, the Tanzimat, was drawn up to serve as a model for internal reforms throughout the century. Its purpose was to transform the Ottoman state from a medieval society into a modern liberal state, an objective that was alternately promoted or obstructed depending on who the Sultan was and the internal opposition he met.

Abdul Hamid II, in the latter part of the 19th century, continued the reforms and flirted with a democratic constitution for a time. He instituted many modern reforms within the Empire, but his suspicions of the west and its designs on the oil resources of the Empire and the attempts by the western powers to undermine Ottoman society from within as well as without caused him to reject the new constitution and to use religion in the vain hope of reversing the Ottoman’s declining fortunes.

This tension between backward looking religious institutions, and suspicions of the west, often justified, and the hopes of the expanding intellectual elite, continued through the reign of Abdul Hamid II and continues today with the arrival on the scene of President Erdogan.

President Erdogan, to the dismay of progressive sections of Turkish society has fallen back on the reactionary elements of Ottoman rule and a rejection of a secular society in favour of a fixation on the glories of the Ottoman past, relying on religion and foreign adventures in Syria, Iraq, Libya and increased hostility to Greece to compensate for economic and political failures at home, a foreign policy that Ataturk predicted would only bring disaster and was to be avoided. Ataturk had the wisdom to renounce imperial expansion. He believed that a modern and progressive Turkish state could only be achieved by concentrating on the core lands of what is now modern Turkey so that the Turkish nation would be a nation that combined the cultures of the East and the West and would establish an element of stability in the Middle East.

Erdogan clearly has the intention of rejecting the legacy of Ataturk, of continuing to express claims to lands that were once under Ottoman rule. He continues to interfere in Syria, Iraq and Libya, destroyed by the NATO alliance, of which Turkey is a shaky member, and continues to mount threats against Greece with naval exercises and offshore oil drilling in waters claimed by Greece.

But his most recent action on July 10, of rescinding Ataturk’s 1934 decree making the Christian Church of Hagia Sophia a museum, over 500 years after Mehmet took Constantinople in 1453 and turned the church into a mosque, is reverberating far beyond Turkey’s borders. For Hagia Sophia is not just any church. Also known as St. Sophia, the Church of Holy Wisdom, it was the seat of the Patriarch of Constantinople, head of the Orthodox Church in the West and is of central importance to the Orthodox Christians of the East, including Russia whose Patriarch in Moscow is considered, by Russians, the inheritor of leadership of the Orthodox Church since the fall of Constantinople to the Ottomans.

It is an ancient symbol of Christianity, first consecrated by the Roman Emperor Constantius, son of Constantine the Great, in the year 360. The present building is the third on the site, redesigned by the Emperor Justinian of the Eastern Roman Empire and dedicated by him on December 26, 537. And it was another emperor, the last, also named Constantine, who, on hearing that the Ottoman soldiers had breached the great walls of the city during the final siege, threw off his robes, took his sword, leaped into battle where the fighting was thickest, offering his life to defend the city, and was never seen again. It was a Tuesday, May 29, 1453. It is still considered an unlucky day in the Greek world, the day the waning crescent moon was high in the sky, as depicted on the Turkish flag.

The Church of Holy Wisdom is an ancient symbol of Christianity, in particular the Orthodox Church that is composed of hundreds of millions of worshippers, half of them in Russia, the rest in Eastern Europe, North Africa, Greece, the Balkans and the Americas. Its loss to the Ottomans was a shock to the Christian world when it happened, but over 500 years, its use as a mosque was accepted as a fait accompli. Ataturk’s decision to turn it into a museum to show respect to both the Christian and Islamic worlds was an important step towards creating some mutual respect and toleration between the two religions that worship the same God. Even Erdogan first thought so, and besides, there were already more than enough mosques in Istanbul. Why create another and offend everyone in the Orthodox world, offend, in particular, Russia?

The answer is, firstly, to shore up Erdogan’s support in Turkey where his party has not done well in local elections in Istanbul and Ankara. He wants to please the Islamists in his own and other such parties, while striking a big Turkish slap at the secular parties; secondly, it is a statement to the world that Turkey is a rising regional power, which, under Erdogan’s leadership, will do as it pleases in its sphere of influence and is another crack in the NATO alliance as Turkey and Greece face off against each other, Turkey expands its already large navy and defends its airspace with Russian S400 antiaircraft systems.

Russia, always anxious to calm tensions, has reacted with caution. Dmitry Peskov, President Putin’s press secretary, stated that the change in the status of the Hagia Sophia in Istanbul will not affect relations between Russia and Turkey, that it is an internal affair of Turkey, and hoped that the Turks will take into account the status of Hagia Sophia as a UNESCO World Heritage Site and its sacred sacred significance for hundreds of millions of Christians. But among the Orthodox Christians there is anger and resentment at this slap in the face of them and Russia. The feelings are echoed in Greece, the Balkans and elswhere. But it may affect future relations between Russia and Turkey as they try to work out a modus operandi in Syria, Libya, Iraq, The Black Sea and the eastern Mediterranean.

The American government condemned the action but the fact that Erdogan ignored them is another sign not only that Turkey is a rising power, but that the United States is a declining power in the region, that the balance of power in the region and the world is shifting, adjusting, reacting to the weakening power of the United States. In such times, conflicts can break out that can lead to world conflicts. The increasing tensions between Turkey and Greece, and now perhaps Egypt, as it prepares to move into Libya as well, can draw in the bigger powers, or at the least create further instability in the region which is already a tinder box. We must expect more provocations from Erdogan as events unfold and further conflict in the regions as a result. And all the while that Hagia Sophia, designed as an epxression of God, is used for political and strategic ends, religion as politics, we can suppose that the God that both religions worship sits sadly on high, dismayed by the folly of the creatures He created.

U.S. President Donald Trump is playing a game of nuclear “chicken” with Russian President Vladimir Putin, regarding Putin’s threat on June 19th to go to war against the United States if the U.S. again shoots down, inside Syria — in the sovereign territory of the internationally-recognized-as-legal sovereign Syrian government — Syrian aircraft, or the aircraft…

CIA’s Jordan partnership with Saudi Arabia has wiped out Obama’s “New Syrian Army” as well. The Russian Defense Ministry announced in a statement that the ISIL terrorist group has shot down a Russian-made military helicopter near the ancient city of Palmyra (Tadmur) by an American TOW anti-tank missile. “The helicopter was attacking ISIL’s defense lines… 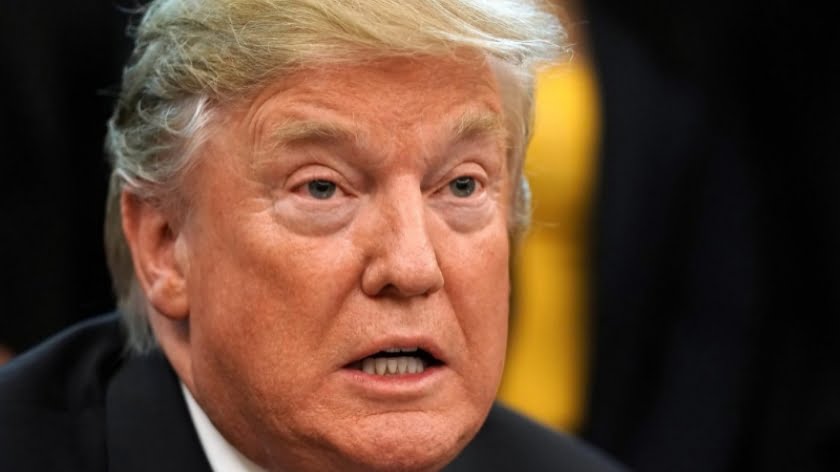 US President Donald Trump is not influenced by dictators. He is not really embarrassed by what they do and he does not have their back for want of a reliable alternative. Trump supports dictators because he agrees with them. His polices and theirs are, to a remarkable degree, aligned.  After the release of the Mueller report, Trump, who no…

Ivanka, our Park Avenue Electra, did it. She’s the one who softened her daddy’s leathery heart by forcing him to watch those dreadful pictures of dead and dying babies, eyes fixed on the carnage scrolling across the screen like Alex in A Clockwork Orange. The obscene photos made Donald squirm. His eyes even moistened. Then he began to tremble with… 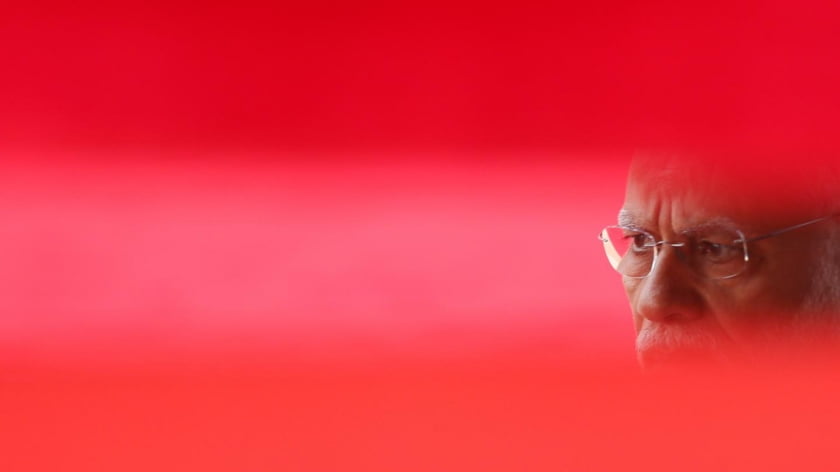