With their brief existence, and dumbed down now by a degraded and warped education, most Americans have a telescoped and cartoony sense of history, so nothing matters, really, beyond the last two or three presidential elections, and each foreign country is represented, at most, by a caricature or two, so Germany is Hitler and Merkel, China is Mao and Xi, Russia is Lenin, Stalin and Putin, Japan is no-name-comes-to-mind, Korea is Little Rocket Man, Vietnam is Ho Chee Mann and Mexico, right next door, is, ah, Speedy Gonzales. Having no historical depth, many Americans will claim that China, for example, is a peace loving and fair-minded civilization that shuns invasions and genocides, but you couldn’t have become the most populous nation on earth without gobbling up many lesser ones, and China’s appetite will only increase as its girth balloons even further. To thrive, it will need a chain of vassals and colonies, same as it ever was.

By 1820, China has expanded to roughly its present shape, with some territory lost since, and other regions becoming more firmly under Chinese control and Sinicized. From 1735 to 1792, China waged ten major wars, including campaigns against the Burmese, Vietnamese, Gurkhas, Xinjiang Muslims, Dzungars and Jinhchuan hill tribes. If you haven’t heard of the last two groups, it’s because they’ve been mostly wiped out. Though extremely costly, with two clear defeats, these wars were dubbed the Ten Great Campaigns by the vain and delusional Qianlong Emperor.

Incompetently ruled, slow to modernize, corrupt, decadent, with many of its men on drugs and its women’s feet bound, China was racked by rebellions then defeated and gang-raped by Japan, Russia, Britain, France, the United States, Germany, Italy and Austro-Hungary, thus came the end of Imperial China. Backward through much of the 20th century, China hardly invaded anybody because it couldn’t.

In Vietnam, China’s pretext for the 1788 invasion was the restoration of a deposed Viet king, Le Chieu Thong, and when at least 40,000 Chinese marched into Hanoi in October of 1788 without facing resistance, they surely thought their mission was all-too-easily accomplished. Four months later, however, the Vietnamese launched a Tet offensive that killed roughly 20,000 Chinese, with the rest decimated further during their chaotic sprint back to China. A defeated Chinese general, Sun Shiyi [孫士毅], would fare much better against the Hmongs and adherents of White Lotus, a Buddhist sect. When you can’t beat a small nation of dark, scrawny men, you can still flex your overhyped muscles against, say, Grenada and Branch Davidians.

The last time China occupied all of Vietnam was from 1407 to 1427. The victors took the Viet king, Ho Quy Ly, back to China, where he was either killed or turned into a common soldier. The Chinese also kidnapped many Vietnamese boys whom they castrated and made into court eunuchs. One, Nguyen An, became a key architect of Beijing’s Forbidden City, now a symbol of China second only to the Great Wall.

China’s ruler then was the Yongle Emperor. Among his many achievements was to send Zheng He on seven naval expeditions that scoured all of East and South Asia, and even reached the Strait of Hormuz, the Red Sea and East Africa. Nearly six centuries later, China is trying to become a blue-water power, and it has established a military base in Djibouti. Last week, newspapers around the world reported that China may be testing an unprecedented electromagnetic gun, mounted on a warship, that can fire missiles a hundred miles at seven times the speed of sound.

To consolidate control, the Yongle Emperor killed thousands of political enemies and scholars of uncertain loyalty, including, most famously, Fang Xiaoru, along with his wives, children, grandchildren, grandparents, uncles and aunts with their spouses, cousins, in-laws, students and even friends, a total of 873 people associated with Fang. That should teach the insolent bookworm! Threatened with family extermination to the ninth degree, Fang immortally shouted, “Make it tenth!” Cut in half, Fang supposedly wrote “usurper” [篡] on the ground, with a finger dipped in his own blood.

History is replete with magnificent men grossly wronged or abjectly humiliated. For defending a disgraced general, Sima Qian was castrated, then jailed for three years, but this didn’t stop the Chinese Herodotus from completing Records of the Grand Historian, a colossal history of China spanning 2,500 years. For the sake of his masterwork, Sima Qian continued to serve the expletive who had transgendered him, the Emperor Wu of Han. 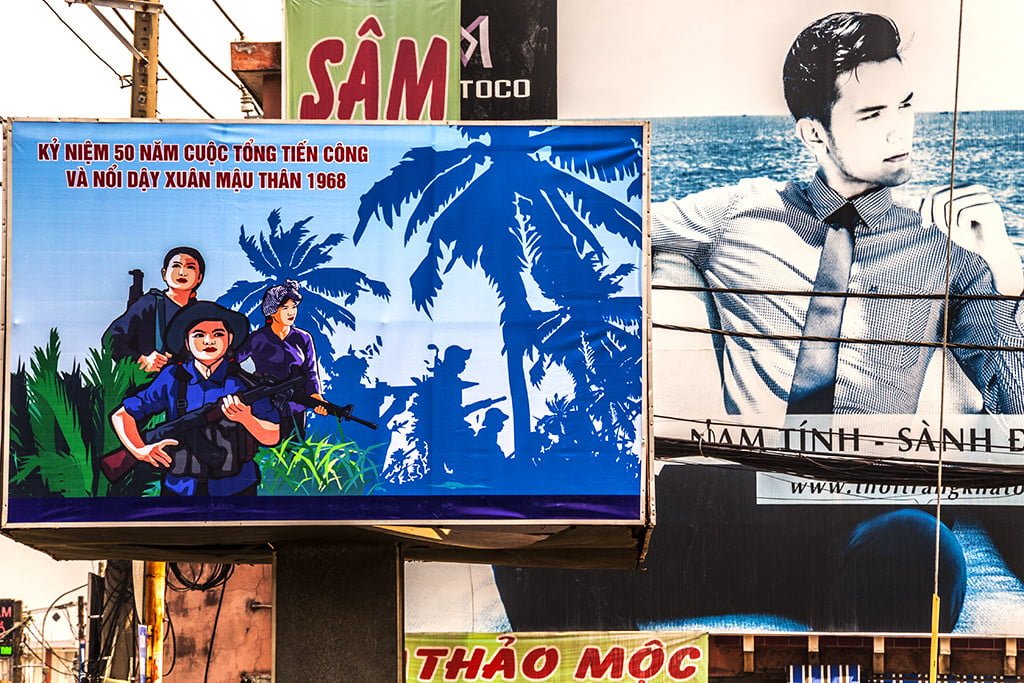 This year marks the 50th anniversary of a much more familiar Tet offensive, so a block from me in Saigon, there’s a well-designed billboard depicting six Vietcongs against a blue background of palm trees. The three most conspicuous soldiers are women, interestingly, with one holding a captured M-16. Walking around, I also ran into a photo display recounting how the Vietcong used a restaurant, Pho Binh, to store smuggled weapons and plan the Tet Offensive. On the first floor, diners were served Peace Pho [Phở Hòa Bình], unaware that in a secret basement was a cache of AK-47s, anti-tank weapons, hand grenades and plastic explosives. Above the eager slurpers, their enemy planned their destruction.

Surely, there are lessons to be learnt from the Vietcong’s urban guerrilla tactics, an uprooted eunuch who built enduring structures, a bold yet ruthless emperor, a servile grand historian and an uncompromising scholar who caused all who knew him to perish? In article after article about the 1968 Tet Offensive, sacrifice is repeatedly stressed, as in one must be willing to die for one’s ideals, nation and the Communist Party, with the last clearly a false note to many.

In peace, Vietnamese display few civic virtues, with traffic accident victims often robbed even, but when collectively threatened, they can show a striking unity and resolve, which have led many foreign observers to compare them to insects. Whatever. What matters is that they have endured for more than two millennia, and from the Trung Sisters, Ly Thuong Kiet, Le Loi, Tran Hung Dao to Quang Trung, the only consensus Vietnamese heroes are those who resisted China. Vietnamese honor Tran Binh Trong. Captured by the Chinese in 1285 after a battle, he refused to yield information and declared, just before he was killed, “I’d rather be a southern devil than a northern king.”

A community can’t survive without a collective memory, and no, sport trivia don’t count. Drugged, decadent, easily manipulated, narcissistic and ignorant of history, how will Americans deal with the existential storm awaiting them?

The U.S. Has No Place in Stirring Up China-Vietnam Relations

By Snubbing China in Rimpac, US Plays a Dangerous War Game