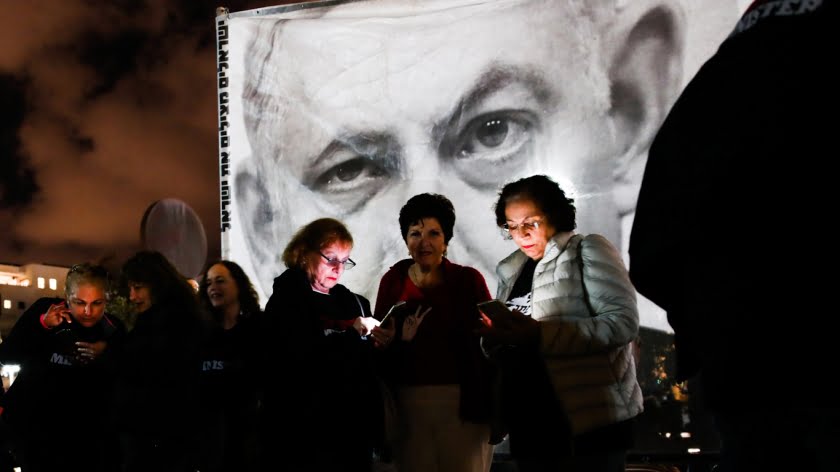 This time, nothing seems to work. Israeli Prime Minister, Benjamin Netanyahu, has tried every trick in the book to save his political career and to avoid possible prison time. But for Israel’s longest-serving leader, the honeymoon is certainly almost over.

It is an “attempted coup,” is how Netanyahu described his indictment on charges of fraud, bribery and breach of trust by Israeli Attorney General, Avichai Mandelblit, on November 21. Netanyahu’s loyalists agree. On November 26, a few thousand Likud party supporters gathered in Tel Aviv, under the title “Stop the coup,” to express their anger at what they see as a massive conspiracy involving Mandelblit, the media, various state institutions, and “disloyal” Likud party members.

Netanyahu’s main Likud party rival, Gideon Sa’ar, received much of the verbal abuse. Sa’ar, who almost faded into oblivion after leaving the Knesset in 2014, emerged once more on Israel’s political scene following the April 2019 elections. Netanyahu’s failure to form a government then was compounded by a similar failure to cobble up a government coalition after the second general elections, held within a few months in September.

Since 2014, no one dared challenge Netanyahu’s reign over the Likud. “There was no need to do so,” wrote Yossi Verter in Haaretz on November 29. Netanyahu “brought them to power, time after time. But few things happened since then.”

It is because of these “few things” that Sa’ar dared to challenge Netanyahu once more. What is significant about Sa’ar’s leadership challenge is not the possibility of him unseating Netanyahu, but the fact that the “king of Israel” no longer commands the type of fear and respect that he has painstakingly espoused over a decade of nearly uncontested rule.

As soon as Sa’ar called for new Likud primaries, Netanyahu’s political minions, such as Foreign Minister, Yisrael Katz, and other heavyweight politicians – Nir Barkat, Miri Regev, among others – pounced on Sa’ar, describing him as “disloyal.” The Tel Aviv protesters had far more demeaning words for the rebel Likud member. However, despite the deafening screams and the name-calling, Netanyahu conceded, promising on November 23, that he would set up and face a party leadership challenge within weeks.

Embattled Netanyahu has no other options. Although he may still come out in the lead should the primaries be held on time, he cannot afford deepening existing doubts within his party. If he fails to ensure his legitimacy within his own Likud party, he could hardly make the case of being able to lead all of Israel following a possible third general election in March.

However, Sa’ar is not Netanyahu’s biggest problem.

The picture for Netanyahu – in fact, for all of Israel – is getting more complicated by the day. The Israeli leader has successfully managed to coalesce his own political and family interests within the collective interests of all Israelis. “I’m doing everything required to ensure the government’s and cabinet’s work is getting done in all the ways required to ensure the safety of Israel’s citizens,” he told a reporter on November 23, insisting that he is still carrying out his duties as a Prime Minister “in the best possible way, out of supreme devotion to Israel’s security.”

Desperate to hang on to power for as long as possible, Netanyahu still employs the same political discourse that helped him unify many sectors of Israeli society for over ten years. But that ploy is no longer reaping the intended result. For one, Netanyahu’s main rival in the Blue and White (Kahol Lavan) Party, Benny Gantz, has neutralized the Prime Minister’s success in manipulating the term “security,” for he, too, is an advocate of war, whenever and wherever war is possible.

Netanyahu’s last war on Gaza on November 12, where the Israeli army killed 34 Palestinians, including women and children, is a case in point. During the short-lived destructive war, Gantz was busy trying to form a government, as Netanyahu had already failed that task. Resorting to war, Netanyahu tried to send three messages, all intended for Israeli audiences: one to Mandelblit, to postpone the indictment; the second to Gantz, to reconsider his decision to block him from taking part in a future government, and the final one to the Israeli public, to remind them of his own supposed ability to reign in “terror.”

But all has failed: Gantz announced his inability to form a government on November 20, preferring failure over extending a lifeline to Netanyahu, whose indictment was imminent. Indeed, the Attorney General’s decision arrived on November 21, making it the first time in the history of the country that a Prime Minister is indicted while in office. Worse, Blue and White widened its lead significantly over the Likud, according to a public opinion poll commissioned by Israel’s Channel 12 television, which was published on November 26.

But what other languages, aside from that of war – in the name of security – and haphazard accusations of political conspiracies, can Netanyahu possibly employ during this period? Such tactics often worked in the past. In fact, they worked so well that the entire Netanyahu political doctrine was designed around them. Now, the Israeli leader has run out of ideas, and is quickly running out of allies as well, not only from without, such as his former ally and the head of Yisrael Beiteinu party, Avigdor Lieberman, but from within his own party as well.

The reason that Netanyahu is still in power after all the setbacks and outright failures is the fact that his rivals are yet to mobilize the necessary votes and public support to oust him for good. It will certainly take more than Gantz alone to dislodge stubborn Netanyahu from office, for the latter has consolidated and entrenched his rule through an intricate system of political patronage that runs deep through many facets of Israeli society.

With this in mind, it seems that the end of the Netanyahu era is finally upon us, but it is likely to be longer and uglier than expected. While it remains true that a fundamental change in Israel’s political system will neither deliver peace and justice to Palestinians – or stability to the region – it could potentially constitute the equivalent of a political earthquake within Israel itself, the consequences of which are yet to be seen.

Precipitate and unexplained decision to sever diplomatic ties with Qatar and impose an air and land blockade of the country bears the hallmarks of the erratic decision making of Saudi Arabia’s Deputy Crown Prince and de facto ruler, Prince Mohammed bin Salman. There has been considerable debate about the reasons for the extraordinary diplomatic and… 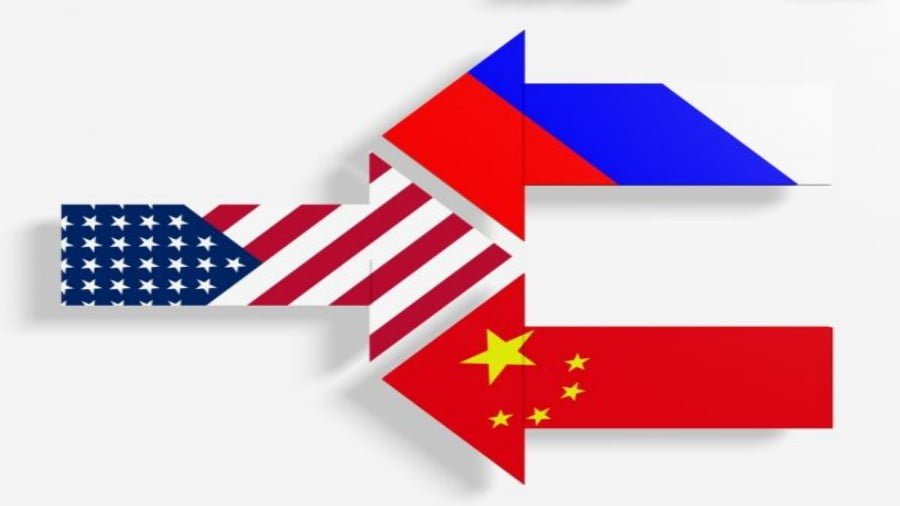 US hostility toward China’s growing political, economic, technological, and military prominence risks possible direct confrontation between both nations. China seeks peace and cooperative relations with other countries in stark contrast to Washington’s aim for unchallenged dominance by whatever it takes to achieve its aims. Last week, Trump regime envoy for arms control Marshall Billingslea said… 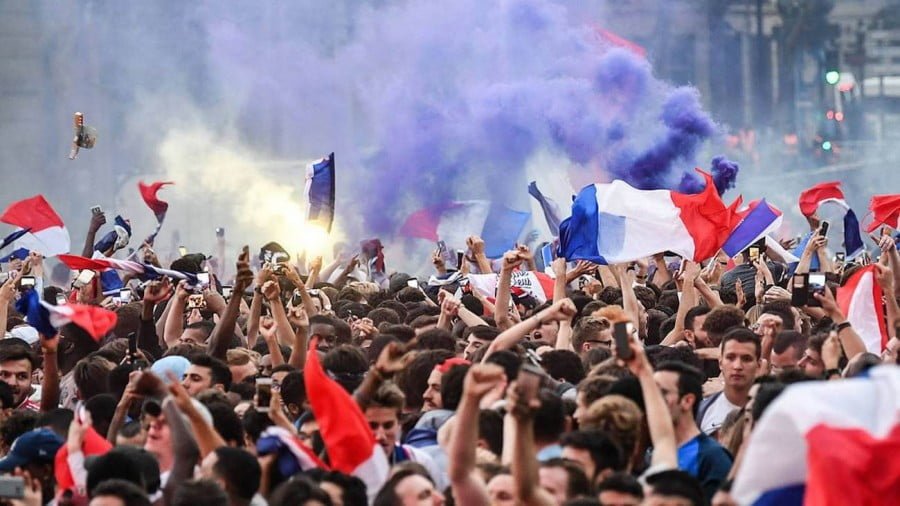 Korea specialist Professor Bruce Cumings notes North Korea became a national security fortress-state as a result of “the holocaust the North experienced during the Korean War”. After the ‘Communist’ label and racial epithets were applied to dehumanize the populace, the US essentially wiped North Korea off the map, with hundreds of thousands or (more likely)…