Is An End To South Sudan’s Civil War Finally In Sight?

The South Sudanese government and its rebel opponents agreed to a security deal ahead of what many observers are hoping will be a comprehensive settlement for ending the civil war.

The accord calls for the national military and a coalition of rebels to withdraw from all cities and civilian areas such as schools and refugee camps in the run-up to the country entering into a three-year-long political transition that will be promulgated through a forthcoming peace agreement. The warring factions recently committed to this roadmap during talks in the Sudanese capital of Khartoum that have raised the international community’s hopes that the half-decade-long civil war that’s already killed tens of thousands of people and displaced a quarter of the population might soon be drawing to a close.

The South Sudanese conflict was sparked by former Vice President Riek Machar taking up arms against President Salva Kiir back in 2013, just two years after independence, but quickly descended into an ethno-tribal bloodbath that observers warned could lead to genocide. Apart from the humanitarian reasons for wanting to end this war, some countries such as Sudan are interested in getting the landlocked country’s oil flowing once more, which also explains the key role that President Omar al-Bashir has played in mediating the latest agreements.

The problem, however, is that neither side in this civil war has full control over their forces, which is why more ceasefire violations can be expected and each party needs to be mature enough to not respond to these provocations. This state of affairs also explains why a prior security agreement calls for troops from the regional Intergovernmental Authority on Development (IGAD) to enforce the peace, which will essentially formalize South Sudan’s division into two spheres of influence between Sudan and Uganda and therefore lead to the institutionalized Balkanization of the country with time.

At the end of the day, South Sudan was always an artificial geopolitical creation formed after decades of foreign support for its separatist insurgency but without its many patrons putting any serious thought into how they’d sustain their gains once their project was completed. The tragic result is that the world’s youngest nation is now at the bottom of almost all development indexes and has become the perfect example of a modern-day failed state, one which exists only in name but in reality is about to become an informal extension of its two most militarily involved neighbors by proxy.

The Peace Deal Proves That South Sudan Is a Failed Concept

The White House is Wrapping Sudan around its Little Finger 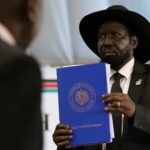 A Peace Treaty in Sudan at Last!
Opinion
South SudanSudanUganda