Is It Time to “Duck and Cover” in the Eastern Med?

How badly does Washington want NATO to survive? Bad enough to betray the Greeks again and to reignite the Cyprus killing fields, that’s how bad. News the US Congress is expected to approve a bill lifting an arms embargo on Cyprus, which has been in place since 1987, can mean only one thing.

According to the news from Washington, the embargo on arms sales will be lifted once Congress passes the National Defense Authorization Act for 2020. Once President Trump signs the bill, US exports to the Republic of Cyprus of “defense-related” materials will add guns to what has always been a volatile situation. Recent Turkey-Greece friction already signaled a rekindling of old war fires, and now the US comes out and flatly admits that the Republic of Cyprus needs to be part of the “Partnership for Peace” NATO program.

The current Greece-Turkey crisis is nothing more than a redux of the United States’ past betrayal of the Greeks when the “colonels” were unseated over the Turkish invasion of Cyprus back in 1974. For decades only a few CIA people and top officials knew of then-Secretary of State Henry Kissinger’s blockage of a British plan to stop Turkey’s invasion. Recently released documents show irrefutably, the U.S. role in the chaos in Cyprus aimed at getting rid of the Greek regime.

This WikiLeaks document from 1975 shows Kissinger for the skunk he is, as well as the Turkish liaison MelihEsenbel, Minister of Foreign Affairs of Turkey. For those unfamiliar with what was going on at the time, read this report on the Kissinger doublecross of the Greeks. At the end of those days, Cyprus lost more people to the Turkish invasion than Iraq lost in the first Gulf War. The death toll was horrific, ethnic cleansing on a scale with the Nazis, and later decades of crisis and mistrust.

With the new Cold War raging full bore, and with Turkey and Libya deals all in the news, the stage is set for a new Greece-Turkey confrontation in which only the United States will profit. This new provocation is an accord signed by Ankara and the UN-backed government in Tripoli which demarcates new maritime boundaries between the two countries. Interestingly, the globalist owner mainstream media is reporting almost nothing about the tensions. Greek outlets and those in the Middle East seem to be the only ones interested. Again, shadows of the Kissinger betrayal in the early 1970s.

Now, the arms embargo on that was lifted by then-president Jimmy Carter for Turkey after three years, has will now be lifted for the Republic of Cyprus. Some reading this will ask, “What does this mean?” But, the answer is fairly simple. Back in 1974 Kissenger and his goons planned the assassination of President Makarios of Cyprus, then they vilified him, as “the proximate cause of most of Cyprus’s tensions,” even though he was also head of the Greek Orthodox community. Kissinger, in one fell swoop, dethroned the colonels in Athens and set in motion a piece of the constant hegemonic struggle we see so acutely today. I urge readers to review this excerpt from Christopher Hitchens’ “The Trial of Henry Kissinger.” The Cyprus quadruple-cross played by Kissinger 45 years ago is being played again. Some reading this will find it interesting that names like Donald Rumsfeld and Dick Cheney of Iraq infamy resounded with Kissinger conversations back in 1974. The recently released Kissinger Telcons are telling indeed.

Finally, the desired result being getting everyone in line with Washington or killing them. NATO must stand. Greece and Turkey must be at odds, and both must cater to Washington or else. Standing in the middle, as always, are the Greeks and Turks who must do or die in a shooting war nothing of their making. NATO is dying, so something has to be done to jolt the useless beast back to life, even if the common enemies are friends. Already, Italy is playing her role by showing the “flag” with an advanced frigate thrown in as Battleship diplomacy. Italian officials supposedly told newspapers:

“The message to Ankara is clear: if we need to show our flag, we are ready.”

Confrontation in Eastern Mediterranean Not Letting Up 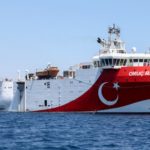 Turkey’s “Sea Bandit” Threats Are Indirectly Aimed Against the US

How West, Central and South Asia Are Interconnecting
Opinion
CyprusGreeceMediterraneanTurkey